Pope Benedict XVI said “Life not illuminated by faith is blind.” I know he’s right. Because of faith, I see the world differently. Catholics hold a “sacramental” view of the world. It “sees” the divine in the human, the infinite in the finite, the spiritual in the material, the eternal in the historical (Richard McBrien). We are called to see God in all things. All reality can and is imbued with God’s grace. What a beautiful outlook! 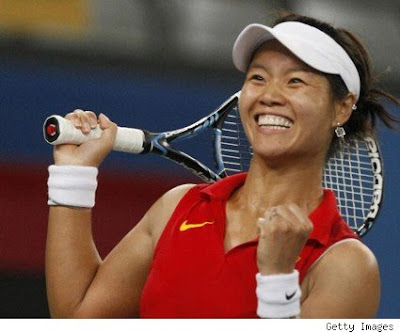 I have to admit I also see things much differently since Christmas. My roommate got a 42” flat screen television. I am stating the obvious when I report just how great it is to watch sports in high definition on such a massive screen. It has only intensified the experience of watching professional tennis. I see just how much topspin or slice players place on the ball; the angle and intensity of the first serve is even more pronounced. I have always been a vocal fan, but my new-found vision has prompted me to yell, “what were you thinking?” more than once. At times, I have had to leave the room because I cannot take the intensity of several matches. Regardless, I have enjoyed watching the 2011 Australian Open even more because of my media enhanced experience.

One does not need a large “high def” television however to see there is something different about the #9 ranked woman in the world, Li Na. 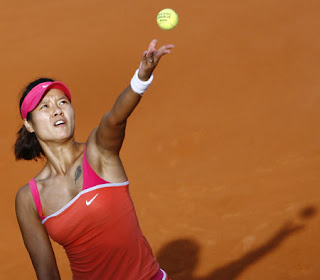 For one, she has a sizable tattoo of a rose on her chest. In fact, it has been the subject of much discussion in China, where few women sport tattoos. She is a fierce competitor on the court; I would describe her as a stern, strong player. According to the BBC article Rise of Chinese tennis rebel Li Na, “her performance at the Australian Open has been described as very "gelivable" - a Chinglish word coined by young people to mean brilliant.”

She is the first person from China to make it to the finals of a grand slam tournament. Everyone wonders how many youngsters will seek to follow in her footsteps, how many girls have been inspired by her feat?

In the interview after her defeat of Caroline Wozniacki, the number one player in the world, she had the Aussies eating out of the palm of her hand. She told fans, in English, that she did not sleep well because her husband was snoring all night long. Her husband, Jiang Shan, also happens to be her coach. One can fire their coach, but their spouse? It is truly a unique relationship, and so are its roots. Li proposed marriage to him on Valentine’s Day in 2005 with a box of chocolates.

It’s a good thing that Li has the support of her husband for she confided that her mother does not watch her play; she gets too nervous. Her husband however advises her to “Relax, he say. Just enjoy the tennis. I was like, How? I was playing on the court. I mean, just before I come to the court, he always like say, Okay come on. Relax.”

I love his advice. I know he’s right. Li Na has already overcome major cultural expectations and barriers. She left the national team in 2004. Her extroverted personality shines through--thanks in large part to the fact that her English is so strong, what a testimony to her!

Indeed "relax and enjoy." And good luck as you play Kim Clijsters in tonight's final. After all, that’s what we get to do from the comfort of our own homes, 42” screen and all...or not.

Posted by Anne Stricherz at 5:50 PM