Like Kim Clijsters, What Do We Inherit From Our Parents? 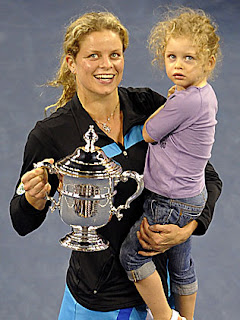 I have to admit I am slightly fascinated by Kim Clijsters, the 2011 female winner of the Australian Open. For one she is professional tennis player and the fact that she is also a mother makes her story that much more compelling. She joins a slim demographic—women who have met athletic success after pregnancy. This year, Kim wore a green dress to honor Evonne Goolagong Cawley—an Australian Aborginal woman who also won the Open as a mom. Considering Goolagong’s roots and what she overcame, her story rivals Kim’s.

And yet, the Aussies love Clijsters as if she were their own. She is still affectionately nicknamed “Aussie Kim.” She almost was! Clijsters lived in Australia when was engaged to fellow tennis pro, Lleyton Hewitt. When their relationship ended, she returned home where she met professional basketball player, Brian Lynch. Lynch, an American by way the Jersey Shore (my Jersey Shore—Belmar!) played hoops at Villanova before playing for many teams in several European countries.

I won’t mince words here. Lleyton Hewitt is one good-looking guy. Good for her and yet Clijsters ended up with a great guy; a man who was willing to renounce his career so their family could be together. It is both unusual and understandable. Furthermore, in her post match interview, she said her nanny would have to work later that night because she had to rest for her championship match. Awesome.

And as interesting as her story is today, so is her background. Kim Clijsters is the daughter of a international soccer star, Lei Clijsters, and Els Vandecaetsbeek, a former Belgian gymnastics champion. Clijsters’ performance on the tennis court reveals those roots. She has incredible strength and endurance; the shots she reaches is amazing. Clijsters says that she inherited a soccer player’s legs from her father and a gymnast's flexibility from her mother. Watch for no less than 5 minutes and she will nearly do the splits to return a ball. She recovers with ease. 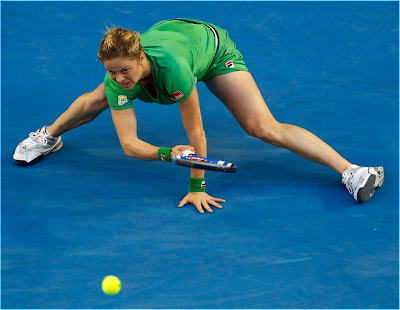 I hope we all recognize what gifts we have received from our parents. I have my dad’s acute memory and my mother’s ability to actively listen. I would like to suggest however that the greatest gift a parent can give their child isn’t only their virtues, an education, athletic opportunities, or music, art, or dance classes. It is their witness of faith, a community of faith and roots in a faith tradition. What greater gift than to raise one’s child with faith.

It has been an awesome privilege to see my friends become parents; what makes an individual more selfless? And yet a number have decided not to have their children baptized. Others have opted not to raise their child in the Catholic Church or any other religious community. They do not want to force their beliefs on their children. They want their son or daughter to choose faith for themselves.

Such logic is unclear to me. Parents choose just about everything for their kids—schools, extracurricular activities, neighborhoods, opportunities and more. Why wouldn’t they choose to cultivate and nurture relationship with God in a formal, intentional way?

In his book “The Jesuit Guide to (Almost) Everything,” James Martin says “the benefits of walking along the path of belief are clear: faith gives meaning to both the joys and struggles of life. Faith in God means that you know you are never alone. You know and are known. Life in a worshiping community provides companionship. During times of hardship, faith is an anchor. And Christianity holds out the promise of life beyond this earthly one.” What a beautiful way to think of our journey. Indeed, parents are with their children at the start of this journey, yet no one but God alone can accompany us every step of the way.

The recent feast day of Saints Timothy and Titus reminded me of the role of not only our parents, but our ancestors and those in our Christian family have in forming our faith. The three New Testament pastoral letters attributed to Paul—Titus, 1 Timothy, and 2 Timothy reveal a close, mentor-like relationship between these men. Titus and Timothy are portrayed as recipients of the Gospel through Paul's preaching. Because of their relationship with St. Paul and the way the Gospel took root in their hearts, they too spread the “good news.”

But Paul alone did not shape Timothy’s great faith. Timothy's mother Eunice and grandmother Lois, converts to Christianity long before him, are praised for the sincerity of their faith that now lives on in their grandson and son. 2 Timothy 1:5, reminds us that the most valuable gift we can pass on to the next generation is our witness of faith.

Timothy grew to become one of Paul's dearest friends and collaborators in mission, as would Titus, whom Paul refers to as “my true son in our common faith” (Titus 1:4). In his “Ignatian Thought of the Day” Sean Lynch writes, “Both became bishops of the early Church, and both shared the gospel with the next generation of Christians, who labored to keep the vision and message of the Lord Jesus Christ alive.”

The Church teaches that every generation needs to be evangelized and that Christian parents are the primary educators in faith. Moms and dads, grandparents, uncles and aunts, have their role in leading the next generation to discover the richness and vitality of faith. And what an awesome responsibility that is. Love and life, soul and salvation are the very stuff we seek to model, share and discover with the young.

Clijsters ended up pursuing a sport that neither or her parents played professionally, but the obviously exposed their daughter to the wide world of sports. She wouldn’t be where she is today had they not. 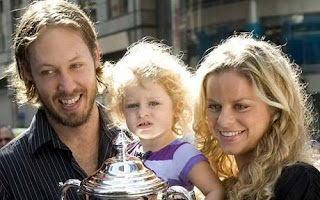 And as for her own family, whether they know it or not, Kim Clijsters and her husband Brian Lynch have already given their daughter Jada so much. The have given the example in their commitment to family. Clijsters has proven that a female athlete can remain competitive after pregnancy. She has won three grand slam titles since Jada was born, she is tied with Margaret Smith Court for the most titles by a mother on tour. I hope all of these great gifts are underscored by the gift of faith.