Like that proverbial path to hell, the road to New Year's resolutions is paved with good intentions. -Catherine Bigelow 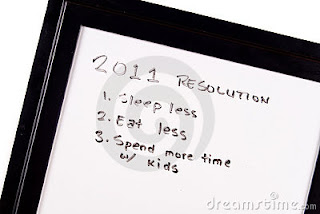 I am a big fan of resolutions. I scoff at the aforementioned words from the San Francisco Chronicle. When I set resolutions—I mean business. And as much as I delight in making resolutions—sometimes as many as five, I enjoy hearing what others have committed to in the year ahead. Two of my favorites include one from a coworker who has resolved to drink more. That’s not something you hear often! I support her quest; she is a lot more fun after she’s put back a few (I am too). And the other? A friend plans on spending more time in the hot tub. Here here!

As the clock drew closer to midnight on New Year’s Eve, something was remiss. I was without my 2011 New Years’ resolution. I contrived a few—to read at least five classics in literature—but nothing significant or meaningful came to mind. I asked myself would this be a year without a resolution? 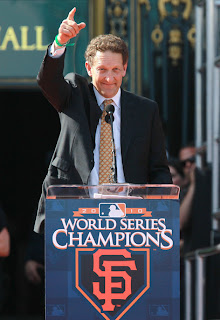 I thought about what was reported in the article Bay Area Notables Share New Year's Resolutions. The only “notable” of interest to me was Larry Baer. This fourth-generation San Franciscan who is president of the San Francisco Giants wants more parade vibe (more cow bell?)

"If there is a way to harness the love, energy and spirit from the Nov. 3 World Series Victory Parade & infuse it into daily life in our communities, that would be my wish.

"May the interim mayor (unknown), the newly elected governor (well known) & our president tap into that same optimism & spirit from diverse communities everywhere to influence positive change in challenging times. And in 2011, may our 'Local Nine' continue to bring smiles to those less fortunate and most in need."

That parade was completely magical. San Francisco is never, repeat never, warm enough for me. But the sunny skies, the love and positivity made the city radiate with warmth that I too wish could be in this community day after day.

Yet what still strikes me as unreal is that the parade took place on my brother Mark’s 40th birthday. Mark lives, breathes and dies Giants baseball; he has followed this team with his heart and soul his whole life. And I know for a fact he had dreams of a parade as a child; he made me very nervous when he started predicting his vision of the parade after the first NLCS win. He has also endured one hell of a year. Every member of my family has offered to carry his cross. But just as God extended a rainbow as a sign of God’s covenant, I believe that parade was my brother’s rainbow, dove and olive branch. God keeps God’s promise. And thank you to those “local nine" plus for making sure that parade happened. Talk about the ultimate birthday! 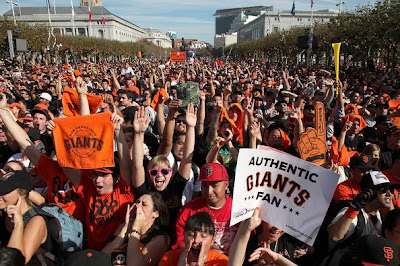 As much as I appreciated Baer’s resolution and a few others, I remained a girl without a resolution. I looked at what, if anything the “notables” cited in common. But the ongoing use of that term “notable” got in my way. That was a new one to me. When and how does someone become “notable?” Are "notables" aware of their status?

And then I began to realize the idea of “notable” isn’t that unfamiliar to me. The Catholic Church is full of designations for holy men and women: saints, Doctors of the Church, venerable, blessed, monsingor, cardinal, etc. “Catholic notables” might not be that far off; I readily constructed a list of them. Some intriguing entries might include James Martin, SJ, Benedict XVI, Bono, Mary Anne Glendon, Jim Caviezel, several of the Supreme Court Justices and more. 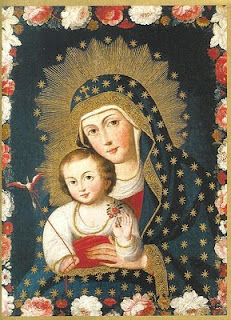 Yet as I contrived a mental inventory, I remembered today is the Feast of the Solemnity of Mary. Is the Mother of God, not the most notable of all Catholics? What might Mary declare as her New Year’s resolution? This was difficult for me to answer. I know what she would ask me to do this year—pray the Rosary, receive the sacraments, pray for peace & the conversion of souls—but what would Mary do?

And with that question came my resolution. I decided that one of my resolutions would be to take to prayer the mind of Mary. What does she ask God for? What might Mary resolve to renew? How can I be more like Mary? How can I think and act more like her?

Like all of my good resolutions, inevitably one leads to another. I started to think about Joseph—the silent saint. Bringing silence to prayer is something I strive to make it a habit. Friar Jack Wintz, O.F.M.says "One of the richest forms of prayer can occur when the heart is absolutely quiet. As the psalmist says, "Be still and know that I am God" (Psalm 46:10)." It’s something I practice on retreat but can be very challenging in my daily lives. I hope to be more like St. Joseph in this way in 2011. 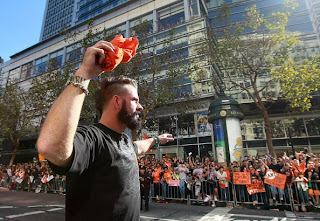 I am grateful that the "notables" in the San Francisco Bay Area and the Catholic Church have hopes that this new year will be better. Let's keep the parade vibe going and Brian Wilson, if you read this, an interview with you is my third and final resolution. Call me!