"Prayer is real. And it's powerful."

Perhaps you heard these words in the days following the Bills vs. Bengals game.

The Monday Night Football game for Week 17 of the NFL season changed the tenor around the water cooler. The Tuesday morning conversation did not entertain typical questions such as Who won? Did they cover the spread? Who is now on injured reserve? or How did the outcome affect rankings for the playoffs.? Oddly, strangely and beautifully, a lot of talk  focused on prayer—not good vibes or thoughts and prayers. Prayer. 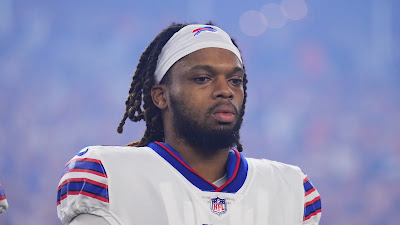 Hamlin, a safety for the Buffalo Bills, collapsed January 2, 2023 after tackling Bengals receiver Tee Higgins during a routine play. According to a statement by the Bills, the 24-year-old athlete suffered cardiac arrest following the hit. Gina Christian – OSV News wrote, "Medics worked for 10 minutes to restore Hamlin’s heartbeat as Bills team and staff members knelt in a tight prayer circle around him. Hamlin was admitted to the University of Cincinnati (UC) Medical Center, initially sedated and on a ventilator."

Video circulated online of Bengals fans reciting the Lord’s Prayer in the stands. On ESPN analyst Dan Orlovsky, a former N.F.L. quarterback, told his colleagues on the live broadcast that “it’s just on my heart that I want to pray.” Bowing his head and closing his eyes, he did so.

While it's not uncommon for athletes to thank God or give credit to their Lord and Savior Jesus Christ, I have never seen an analyst go off script in this way. What might be even more interesting is that those in the studio appeared to be equally engaged and ready to join him.

The whole world? Not sure about that? But millions of people? I think so. 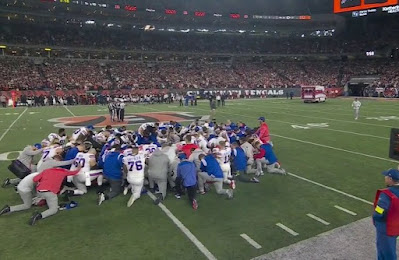 In the past five to ten years I have noticed that the number of people who are comfortable using the word "prayer"has decreased. Many are hesitant to ask for prayers. Others are reluctant to offer prayers for someone or something. Whereas I once heard someone say "I will pray for you" before a surgery, a job interview, and travel, today I hear "I will be thinking good thoughts."

One reason for offering "thoughts and prayers" is the fear that we might offend someone. I would argue whether or not one is religious, spiritual or both, if YOU believe in God—if you are a person of prayer—to offer to pray for someone is a gift. When I have heard those words they have brought me comfort and connection in a way that sending "good vibes" does not.

Prayer isn’t a magical formula for getting what we want, and it isn’t reserved for ‘holy’ people, people practicing a faith tradition or for special times or places. Prayer is talking to God.

What happened with Damar Hamlin got people talking to God. He changed the narrative. We continue to hear people praying for him and his ongoing recovery. We also hear society asking a lot of questions. We should.

The good news is that a life of prayer, more than likely, reveals more questions than answers.  And prayer enables us to live with the questions.

And why do you pray, Moishe?  I asked him.

I pray to God that he gives me the strength to ask Him the right questions.

A fair question is not "Did these prayers work? but "Why? "Why did Damar survive? How it is that he lived and others die?" Big questions. Honest questions? Are they the right ones? Another good question.

Aquinas' conviction calls me to pray and to really give myself—my time and attention to prayer. 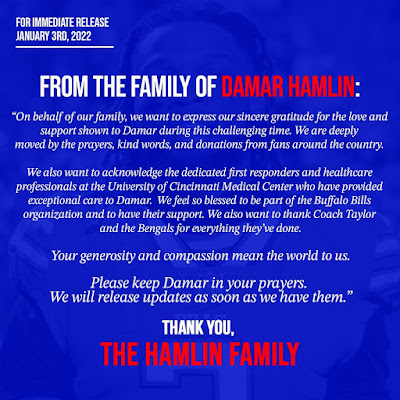 What questions did the events surrounding Damar Hamil raise for you? Did you bring any of those questions to prayer? Are you comfortable offering to pray for someone? How do you feel when someone offers to pray for you?

God's love and grace has worked through the most popular sport in America to heal and help us consider what we believe and why.

Sending Damar, his family, friends and teammates love and prayers.