Week 3 in the NFL: Lessons on What Losing Looks Like

Week 3 in the NFL offered a shake up in every which way. From the new power rankings to the  emergence of this week's number one, the 2022-2023 is full of surprises. Some are exciting—Is Miami really that brilliantly coached?  while others—such as the number of season-ending injuries before October 1 are much more than unfortunate. We continue to talk about the talent of Tom Brady and the antics of Aaron Rodgers and yet, Week 3 afforded a new type of question. It's one I think coaches should discuss with their athletes, and parents with their children. How do you respond when you lose? And how should you respond? 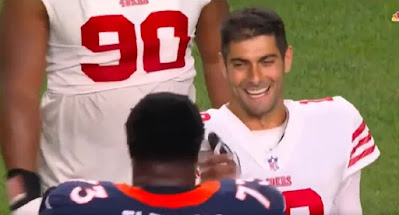 Week 3 offered two very different reactions to use as examples and for discussion. On one end of the spectrum, at Mile High Stadium in Denver, the 49ers lost 11-10 to the Broncos. In a world that isn't afraid to point fingers, one is directed at the once-again starting quarterback, Jimmy Garoppolo

In his first start since Trey Lance was ruled out for the season with an ankle injury, Jimmy G stepped out of his own end zone for a safety, he threw an interception and lost a fumble on a poor snap exchange. The 49ers' offense produced just 10 points, punting the football away seven times and committing three turnovers.

Despite all the ugly play, Jimmy G and the 49ers had a pair of chances in the final minutes of the game to take the lead. Both drives ended in turnovers. Still, he was smiling—mega watt smiling— as he approached Broncos lineman Cameron Fleming after the game. He gave him a huge embrace and looked as if he did not have a care in the world. To his credit as a pro-athlete the man did not look winded or as though he had just spent the past three hours in a physical contest. Good on him, right? wrong?

Ask athletes and coaches to respond. Is Jimmy G's carefree, good vibes demeanor immediately after a loss okay? Is it appropriate to "flush it" so quickly? When you team loses, should team leaders—like the quarterback be upset? angry? frustrated or disgusted? Does it matter?

Greg Papke writes, "Dorsey lost his cool at the end of the game as the Bills failed to get set and spike the ball in time to attempt a game-winning field goal attempt in a 21-19 loss. The video went viral and attracted some amusement, but not from Josh Allen, who said he did not see the reaction as “bad frustration.”

In fact, when asked about the video, Allen said "You show me someone who's ok with losing and I'll show you a loser."

Dorsey addressed his behavior to the media. He said,  "I don't ever want to take the passion out of the game. And we're in this to win football games for the Bills, for our fans. But it's something I'm going to learn from and make sure to correct going forward." Fair enough.

While passion for the game and a desire to win fuels the fire, it is always worth tempering and keeping in control. Ask athletes to articulate how they keep themselves in check.

Model the behavior you want to see and call out what you don't. Never assume that your team knows what is expected in terms of behavior. Preach, teach, model and more on a regular basis.

For example, when my golf team returned to competition post COVID, I noticed high school golfers were at a loss of how they ought to conclude the match. At that time, people were still wary of shaking hands. Consequently, a number of golfers just exited the green without acknowledging, thanking and congratulating their opponents. Just because the hand shake was out, doesn't mean the spirit behind the post game ritual ought to go away. I required my athletes to make a point of connecting with their teammates and opponents in a new and safe way.

And for those athletes who are able to shake it off, seconds after the final out, bell, etc I hope I would offer constructive criticism. Former Niners tight-end, Brent Jones offers a fine example.

He said, "I want to see Jimmy grabbing a couple receivers and talking to them, I want to see him patting his linemen on the shoulder and saying ‘I need some time." I agree. A leader of the team need not have a temper tantrum or go dark. Instead, he or she can communicate and contact their teammates to make it better...do it right....while working to change the outcome in the future.

How we comport ourselves is another form of communication. And I don't know a person on the planet who doesn't need to think about and work on communication regularly. We all do better with good communication. Good coaches excel at this. Teams thrive when it is strong. Does it change winning or losing? Truth of the matter is, it probably does. Here's to Week 4.