One of the great joys of my life, is being a sports fan. I'm not joking. This passion means that I live from one season to the next in anticipation of what a team, athlete, coach and fan base will give and receive, achieve and accomplish, dare and dream. Furthermore, as a golf and tennis fan, four times a year, I am privy to a championship that never fails to live up to its billing. Every grand slam or golf major is special, most are memorable and a few are exceptional. The 2022 United States Tennis Open is one of those.

Now in its 142nd year, this year's tourney drew even more press when six time champion, Serena Williams announced her farewell to tennis—in her own terms. While her performance at the Open merits its own reflection, her bon voyage was far from the only story that made this Open so special. Here are but a few thoughts, questions, and remembrances I would like to share. 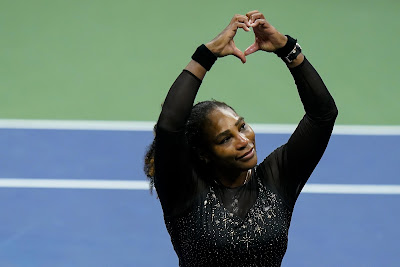 Simply the Best
Many expected Serena's first round match against Danka Kovinić to be her last. Given that she played professional tennis less than ten times in 2022 and that she lost in the first round at Wimbledon, I understand the conjecture. However, the spirit that fueled both Agassi and Connors while standing in those same tennis shoes, suggested much more.

Serena's second round defeat of the number two seed, Anett Kontaveit was a match for the ages. Under the lights on Arthur Ashe Court, it's possible that Tiger Woods' forearm grew weary from flexing so often.

Although my hopes ran high as Serena won the second set in her third round match, her opponent, did not relent. Ajla Tomljanović broke Williams again and again in the third set, and as she did, I sensed a shift. I still cheered loudly and nervously, but I began to hold on. I  savored every last cross court winner, ace and "Come on!" she could muster. Though my vision of a 24th Grand Slam title was put in the rear view mirror, like everyone else in attendance I anticipated how she would bid adieu.

The crowd was brought to their feet. All were clapping, many holding back tears. I let mine go. In the background, the song "Simply the Best" by Tina Turner took over the airwaves. I love it when a song can underscore all that we feel.

Serena began by thanking her parents. She concluded with words of gratitude to her sister, Venus. So fitting. 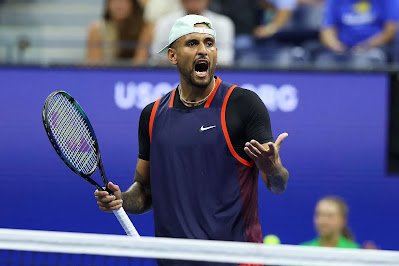 What to do about Kyrgios?
If John McEnroe played tennis today, it's quite possible he might be known for more than his tantrums. I wonder how the fire that fueled the outbursts, obscenities and passionate plea "you can't be serious!" would be channeled differently. Why? The odds are, McEnroe was probably right.

Now an announcer, John McEnroe played professional tennis before the Hawk-eye system. He also has exceptional vision. This technology works in tandem with the line judges who are—good, bad or otherwise wrong—a lot.  (please note, the Hawk-eye system, is not flawless either).

While McEnroe may have been right about those outs that were in, he is wrong about what he divulged to the 20th ranked player in the world, Nick Kyrgios.

He told the hard and creative hitting, fast serving Krygios, "tennis needs you." He said "you're one of the best things we've got."

I understand why he appealed to the fit and insanely talented Krygios. His game is truly electric. To me, it's like watching basketball on the tennis court. He has finesse and flare; his athleticism is second to none. I find it impossible NOT to cheer for him...until I don't.

While I am sympathetic to how he handles the pressure of the game, I am challenged, disappointed and disgusted time and again by just how far he takes things. Kyrgios screams foul language. He throws, hurls and tosses equipment—violently. Although the game assesses penalties and fines for unsportsmanlike conduct and racket abuse, he continues to lose control. I often wonder, does he care?!

I have a wide berth for his frustration but when he slammed his racket and couldn't muster the ability to wave to the crowd to thank them for being behind him all night, I said no more. I want to love him, but at some point enough is enough. Right? 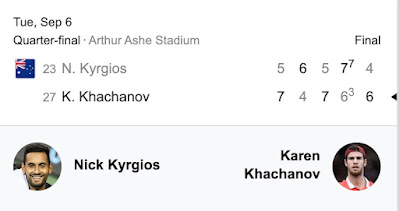 Political Nuances of the Game
While unvaccinated players were not allowed to play in the 2022 U.S. Open, men and women from a certain country were.

Back in April, the organizers of Wimbledon made the decision to ban players from Russia (and Belarus) in response to the invasion of Ukraine. This boycott excluded some of the ATP and WTA top players. While you would have seen some of the games greats like Daniil Medvedev Andrey Rublev, and Karen Khachanov or Aryna Sabalenka and Daria Kasatkina, you would not see a flag next to their name. When these players were introduced, no announcer said from where they call home.

I don't know if Putin is a tennis fan, but it is widely known that he does love sport. And tennis always brings attention to one's homeland.  And speaking of which....

The American Dream: Watch this video!

Perhaps the greatest story to emerge from the 2022 is the tale of Tiafoe. I will let his personal profile speak for itself here. If this is the future face of American tennis, we are in for joy, athleticism and great competition. I love his game!

In Conclusion
While I don't look forward to the conclusion of summer and going back to school, this time of year affords the magical moments and memories created only at the U.S. Open. This year was one for the ages. And, I know there will be another one to come...