What I Learned and Did Not Learn from the Golden State Warriors: 2022 NBA Champions

Upon winning his fourth NBA Championship, Draymond Green of the Golden State Warriors was asked what this tough series made him learn about himself. The 6'6" Forward said "I didn't learn anything about myself, I been knew I was resilient."

His answer garnered little to no surprise from his teammates (see how Steph Curry shakes his head in amused understanding). As a coach and a teacher, my reaction was much different. I thought to myself "that's a terrible thing to say. How do you not learn something about yourself in all of this?" I gave a massive eye roll; my patience for Day-Day often runs thin. And then the more, I thought about it—considering what his teammates and coaches said— I realized he's absolutely right. 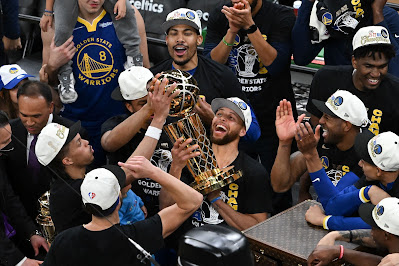 One need not be a Dubs fan to know that Draymond Green is resilient. Seldom one to back down, Green blocked, rebounded and drew a whole lot of fouls from the start to the final minute. In fact, every one of his teammates did what we already know they do to defeat the Grizzlies, Mavericks and Celtics. They probably didn't learn anything about themselves either. Klay made clutch threes and Steph did the same—all while leading the offense and dishing to new teammates Jordan Poole and Andrew Wiggins.

After the interview with Green, Lisa Salter asked Wiggins the same question. The Canadian Forward paused and said, "I learned it's hard to win a championship."

Did it take a victory for Wiggs to learn just how hard it is to win? Probably not. There's nothing easy about earning the championship title. Greatness always comes at a cost. I imagine the experience affirmed the hard work, physical and mental demands and personal sacrifices he has put forth day in and day out for years. 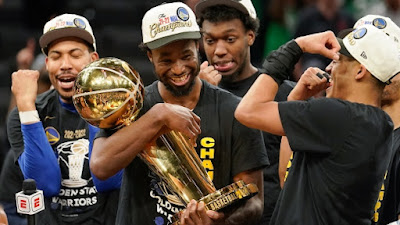 We know this, too. In that moment, I wanted every young American to take notice and listen. I don't know that I need the reminder but question asked of Green and Wiggins did that. So often students want the "A" without putting in excellent effort and athletes was the win without making and taking the sacrifice. Thank you, Lisa.

So, what did the players learn about themselves? And what did we the fans learn?

In the final moments of Game 6, Steph Curry broke down. This break down was not an injury that removed him from the hardwood or caused the offense to collapse. No. As written for USA.Today.com

But before Curry once again got his very deserved flowers for a 34-point, seven-assist, seven-rebound clinching Game 6 performance against the Celtics, the prolific point guard had to find some time to bask in the moment in the most human way. Curry broke down into tears in the closing seconds once he officially realized Golden State had climbed the mountaintop once again.

I should not have been surprised at this display of raw emotion, but it has stayed with me. I learned what a burden he may have been carrying all year. He said at the "Beginning of the season, nobody thought we'd be here except everybody on this floor right now." I learned what drove him and got a sense of the toll that takes.

For the first time, Curry earned the Finals MVP award. No one could argue otherwise. When the trophy was given to him, he kept shaking his head as if to suggest a big "yes. please. thank you. you're welcome."

Every Golden State Warriors championship: 2015, 2017, 2018 and 2022 does not happen without Steph Curry. He is the starting point guard and their best shooter. Furthermore, Steph is the consummate sportsman. He comports himself on and off the court with integrity and total class. It's not that he is staid or hard to read, but this moment  Steph was so human and I dare say, so holy.

Why holy? Because Steph showed us what can happen when we will the one thing. He willed the win in Game 4, a turning point for the Dubs in the series. The man gave his heart, body and soul without compromise to what he loves to do and was created to be: a great athlete, an outstanding teammate. This is beauty in motion and sport at its best. To say otherwise is to deny Creator the glory of what the Creator has created.

How is it possible that the Golden State Warriors, the 2022 NBA Champions both taught us nothing and yet so much. Such is the story of this historic season. Thank you Dubs!