While I am aware the modern understanding of time is based on Einstein's theory of relativity, can someone help me get a grasp on how memory works?

I can't remember what I had for lunch yesterday or how I spent last week and yet there are events that occurred five or fifteen years ago that are frozen in time. The perfect game thrown by San Francisco Giants pitcher Matt Cain 10 years from today is one of them. 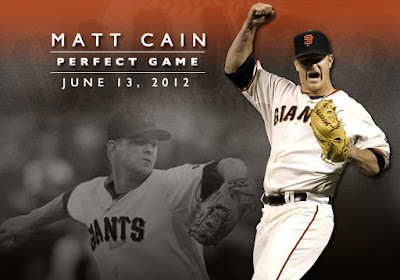 I imagine legions of baseball fans have miraculous plays and specific games etched in their mind's eye. No doubt a perfect game—a game in which the pitcher completes a minimum of nine innings without a batter from the opposing team reaching any base—ought to qualify for memory lock. It was the first and only perfect game in San Francisco (and New York) Giants history. Thank you, Matty!

For Bay Area residents, June 13, 2012 was just one event in a week that made us feel as though any search for center of the universe would show the Bay. For one, the 112th US Open took place at the Olympic Club on the west side of the city. On June 12, the Giants celebrated Irish Night at the yard by welcoming Rory McIlroy to throw the first pitch. One day later, Dustin Johnson, one of the top golfers in the world joined Matt Cain behind home plate to tee it up. AT&T Park became a driving range with a dramatic target— the McCovey Cove waterway up and over the right field bleachers. Cain admitted this pregame warm-up was one reason he was so relaxed that evening. Note to coaches and managers....

I remember all of it. In high def, in 3-D, in living color. Go Giants!

June can be warm and free of the fog that characterizes the coldest winter Mark Twain event spent. On this night the temperatures were warm and the skies were almost heavy. I can still see and feel it. How is that possible?

I remember a certain buzz started percolating in the sixth inning around the status of this game; the no hit watch was on. At first, the conversation was purely speculation. I thought, there's a lot of baseball left! My friend Heather texted me to tell me her husband was at the game. I was so excited for the Giants and for him!

As Cain continued to put three up and three down, nerves, jitters, excitement and joy reached a boiling point. Gregor Blanco's spectacular diving catch in the seventh inning not only preserved the perfect game, it sent emotions and amazement over the top. After the game Matt Cain asked the right fielder "What can I give you as a thank you gift? A Rolex? Down payment on a house?" Love it.

This once in a lifetime feat, in the midst of one of my favorite sporting events of the year prompted magical conversations on this day—the day after the perfect game: June 14, 10 yeas ago! 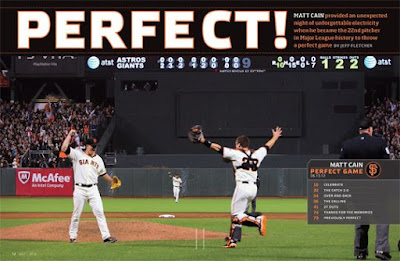 Last week I attended my college twenty-fifth plus one year reunion at Notre Dame. It was such a gift to have time with my classmates to reconnect, recall stories and share stories. The biggest surprise wasn't how people look or what became of so and so, it was what I could remember and what I couldn't. I pride myself on having a good memory and I could hardly believe some of the details about classes and teachers, dorm life and people my friends and I discussed. This was both humbling and inspiring. Memory is not a given. Hold on to what you can!

The poet Virgil wrote, “No Day Shall Erase You From the Memory of Time.” Time may or may not fade our memories. The passage of time can deepen out appreciation for what we have been given. And yet, his words, from Book IX of "The Aeneid" suggest the transformative potential of remembrance. So let us exercise our memory and celebrate the milestones—whether it be a perfect game, 25 year reunion or the first month of sobriety for in them lies the potential for transformation, gratitude, inspiration and joy.

Thank you, Matt Cain. Thank you, Gregor Blanco. Thank you DJ and all those who played some part in perfection 10 years ago!