How often have you read the line "studies show...."? Do those words prompt a reaction? Or simply confirm what you already know to be true. I ask because I have a question. I don't even know if there is a way to quantify the research. Do studies show it's the little things that make a difference? Can they?

When I think back upon an event or recall a special memory, what I savor most is not the big award or the dramatic ending—it is something small. More often than not, I hold on to a gesture that might have gone unnoticed or insight that I have gained through reflection. It's amazing that something so small can make such a lasting impression and cultivate joy. I want to thank Ernesto Sanchez, Jr. for this reminder. 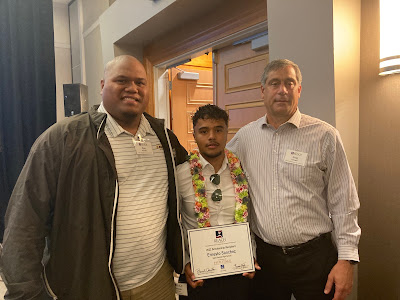 Established in 1996, the program’s goal is to recognize and honor local high school senior student-athletes who have overcome adversity to excel academically and athletically. At the heart of the REACH program is the belief that "participating in sports can be a source for good in a young person’s life, especially during difficult times." Neither Jacob nor Ernesto are strangers to adversity yet, they each have persevered and generously, passionately contributed to their respective teams. Jacob played soccer and is a member of the track and field team; Ernesto played football and is on track and field. 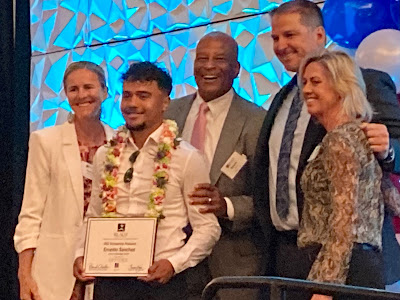 Honorary co-chairs Ronnie Lott and Brandi Chastain conferred the Dwight Clark Memorial Award, a $5,000 scholarship on Ernesto, a varsity wide receiver and sprinter. He will play football at Foothill College this Fall.

Ernesto, a young man of strong faith was able to tell his story to the scholarship committee and in a video, which all in attendance saw (I hope to post that here once it is available). Ernesto's father died by suicide at the beginning of COVID. His father must have struggled with mental health for some time, as Ernesto asked his mom "Did he finally do it?" when she approached him with tears to bear the tragic news to her son. During that difficult time, Ernesto turned to his teammates and coaches for support. He found it both on and off the field. 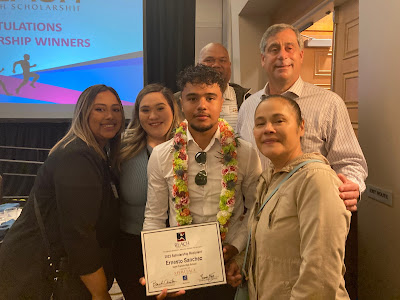 Upon receiving this prestigious distinction, Ernesto thanked his family, coaches and those who made the day possible. He said, “Thank you for this great opportunity. You got to hear a little bit of my story. Congratulations to all the other nominees. I wish we could hear your stories, too.”

Ernesto did not know he would be invited to speak at the microphone. The fact that he thought of his peers and their perspectives at this time brought even more tears to my eyes. He was right, I think everyone would appreciate the opportunity to hear the stories of these outstanding student-athletes. I would like Ernesto to know I admire the courage it took to share his.

As an ethics teacher, I teach about character, conscience and virtue. Our character is our destiny! We build it by the decisions we make and don't make. In class, we unpack what is the first, second and the third level of character for more understanding of who we are and who we are becoming. To the frustration of some, our third level of character—our core—is in some sense, a mystery. We get but a glimpse of our deepest selves in how we respond in times of adversity and strife as well as good fortune and great accomplishment.

I can only hope if I was put in such situations, I would do as Ernesto has done. He remained a committed teammate and turned to his coaches for support. He has kept his faith and continues to pray for his Dad and for others. In victory on the field and at the scholarship breakfast, Ernesto did something seemingly small—he recognized others—and the impact was huge. Our hearts are still burning within....