Swag. No athlete or sports fan is a strangers to it. Some of us want the stuff that's handed out for participating in the 10k race or for attending opening day at the minor league game. Others walk away—hands free—and don't look back. 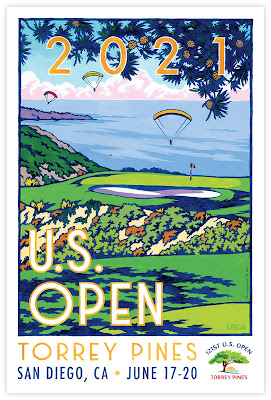 I always thought swag was a Yiddish term. I wondered, is it "swag or schwag?" Vocabulary.com says that "Swag refers to valuable goods, often obtained illegally. Just because your friend has a bag of swag does not make him or her a pirate (although the patch and wooden leg might say otherwise)." Generally meaning “loot, booty, or plunder,” swag is the stuff in the bags of excited party-goers and plunderers alike." But according to my friend Cort, swag is actually an acronym. S.W.A.G. stands for for stuff we all get. And so it's with that spirit that I would like to share the S.W.A.G. I acquired by attending both the Friday and Saturday rounds of the 121st United States Open golf championship.

As a sports fan who enjoys good optics and analysis, the live experience of watching professional golf is limiting at best. You can only see so much. I can't tell you how many times I have said, "I lost it" after a player hit an excellent drive. During the match, one must commit to following but a few players or sitting at certain tee boxes or greens for the view. So why go? or rather, What is the swag? The stuff we all get?

I would be remiss if I did not admit, fans got to see a whole lot more of the course and the players. Why? According to US Open crowds limited despite California reopening, "The U.S. Open attendance is expected to top out at about 13,000 each day, barely 25% of the numbers at Torrey Pines when it previously hosted the tournament in 2008." The 2020 US Open at Winged Foot, had no fans in attendance. 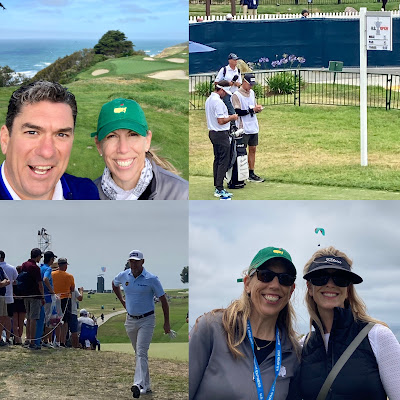 I was able to attend with a long time friend and college classmate, Cort and his daughter. Upon entering  and exiting the walkway next to the 18th green, I savored the energy, the feelings of anticipation and excitement buzzing from the crowd. It wasn't unfamiliar, it had just been a while!

People were looking at who was coming up the fairway and at one another. Sans mask, it was fun to see friends and acquaintances reconnecting—shaking hands, checking in, departing with hugs. We were about to head over to the merchandise tent when Cort took notice. "Anne, there's John Lynch, do you want to meet him?" "Where? " I said. Sure enough, the General Manager of the 49ers and 2021 NFL Hall of Fame inductee stood chatting with a friend—accessible and available. In terms of swag, meeting one of your favorite leaders in sports is as good as it gets.

The swag provided by the setting of Torrey Pines is nearly restorative. The trees after which it is named, the canyons nestled between holes, the parachute gliders floating in the sky and over the Pacific make for an incredible backdrop. Given that there is time and space between the pairings /groupings of golfers, the fans can't help but take in the ocean view and vistas that run parallel to the course.  Post US Open, I hope folks know what I have described here truly is swag. Torrey Pines is a public golf course.

Whether it's swag in the form of a free shirt, a magnet, sticker or water bottle. Or, swag redux in the form of improved spectator conditions, a deepened appreciation for the roar of the crowd,  or a recharge from the beauty of a place and space the best swag—the stuff we all get par excellence are the memories.

I am so thankful for the memories I now have of my fifth US Open, of the start of summer 2021 and with my long time friend Cort. My classmate from Notre Dame, I met Cort on the first day of living in Farley Hall. A native of San Diego, Cort stopped by room 213 because one of my roommates hailed from Torrey Pines. Cort and I have attended countless football games, many concerts and innumerable masses together. We both taught in the ACE program and have shared many of life's ups and downs. I have played golf with him on the North and South course of Torrey Pines. and his knowledge of the venue was outstanding. I shouldn't have been, but I was blown away by the number of people he knew in the crowd. It's quite possible that Cort has never met a stranger—he has a way of making everyone feel welcome, known and included. Might be because he was "Born on Sunday," the title track of his next album. Attending the Open with his 13 year old daughter was an added bonus; sporting events are always more enjoyable when shared with a young person's perspective.  I went to the 2021 U.S. Open because he invited me to join him. His hospitality was exceptional....it's safe to say I left San Diego with a swag bag that overflows.

Next time you hit a live sporting event, I encourage you to consider the S.W.A.G. that is given and received. Priceless....

Posted by Anne Stricherz at 7:33 AM

Email ThisBlogThis!Share to TwitterShare to FacebookShare to Pinterest
Labels: swag, US Open