Coaching Will Ruin Your Life: Why We Do It Anyway

Ask me why I still coach after twenty-plus years of working in high school athletics and my dear friend Haley comes to mind as one answer. Haley is a former colleague; she is a huge sports fan, wife, mom, teacher and true soul sister. Like me, she runs a varsity program. Unlike me, she manages a team of 30 young women on a team sport. Golf is different. It is an individual sport that high schools and colleges offer as a team experience. I carry nine girls on varsity and eighteen in the program. In spite of our differences, Haley and I meet in the middle. We unpack the challenges of coaching the female high school athlete. We discuss the fight that we face to give female sports the recognition they deserve. Together we have come to determine at some point, somewhere we want to offer a talk....or write an article...entitled "Coaching will ruin your life: Why we do it anyway." And, finishing the 2020-2021 school year's golf season might just add a new twist. 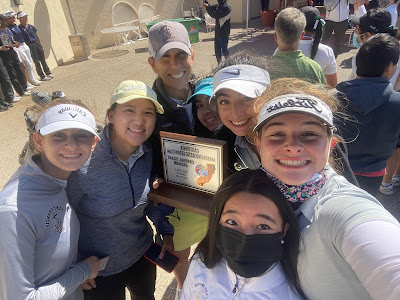 Coaching high school sports will ruin your life. During the season, you can kiss your weekends goodbye. You never quite know if you are doing enough. Should I have scheduled a few more scrimmages? Why not organize a Catholic school tournament? Did we practice this part of the game enough? Why can't they do x? How can we get better at y? And when will z stick? There is always some administrative task that has yet to be done. Though you may have the transportation needs and dismissal times published, you forgot to get the uniform orders in as early as you had hoped. Your weekdays are long, your game days longer. It is never safe to assume anything. For example, as soon as I started to think how well my team was getting along, one girl confessed to mean girl syndrome on the team. This floored me. Just the other day, I shared with another golfer some of the drills my team practices. She said "wow, you really plan stuff." Yes I do. If I don't, my life is doubly ruined!

But this post is not the story of the ruination of my life since athletics reopened in the state of California due to COVID. When the CIF announced that girls' and boys' golf would begin on February 8, we were ready and excited. When I saw that the league championships would take place in May and the sectional championship would happen in June, I thought "ok." So much of life this past year was TBD. I figured the story of this season was to be determined. And so it was.

Coaching did anything but ruin my life this year. In fact, it was one of the most enjoyable parts of it. I wouldn't be a teacher or a coach if I didn't enjoy spending time with young people and this season allowed me to do something I once took for granted. I got to spend time, in person, with the same girls, participating in a game we love. With the restrictions of COVID came new found freedoms. We met at the golf course, and girls came when they could. If they couldn't make practice or a match we worked around it. This wasn't seamless or without hassle or mistakes, but it worked. 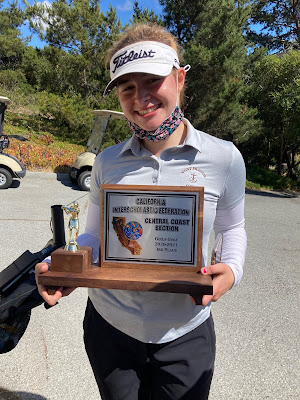 We welcomed to our team two seniors—one who quit the year before due to academic demands. The other was a young woman who had talked about playing golf—a lot—but played volleyball in the past. I heard about this as her classroom teacher and invited her to try out. Too many seniors take a step away from participation in high school sports. We are so grateful she didn't!

Their kindness, positive attitudes and talent galvanized into a team chemistry that shaped our team for the better. Whereas teammates are naturally competitive with one another, the affect of these seniors buoyed the camaraderie and playfulness of the crew. For example, after one round, one player was noting how terrible she played because of her three-putt. One of my seniors said "well would you rather three putt or three chip to get on the green." That's a good teammate.

We finished second in the league and played at the Central Coast section championship, Wednesday June 9—nearly two weeks after classes resumed. We were told by the league commissioners that players would need to leave right after their round and there would not be an awards ceremony. No one questioned these protocols; girls' golf in the Spring season is already an anomaly.

What materialized could not be scripted. Because we qualified as a team, my players were in the final six groupings. Upon finishing, girls sat on the grass—the 18th green at Laguna Seca Golf Ranch has a natural amphitheater around it— and waited as their teammates came through. As each girl came in, their teammates wanted to know how they did. This is always a tense moment because their is the inner-pressure to best everyone in the field is coupled with a true desire to support your teammate! With school out and the season over, we felt no pressure to go anywhere or be anything other than who we were at the moment.

One player was fighting back tears. Another girl saw this and said "it's ok, I cried earlier." Another admitted that she cries all the time. One added that she wears waterproof mascara because she knows she will cry. When one girl finished, her dad gave her a big hug and told her how proud he was of his daughter. The girl sitting next to me said "I wish my Dad was like that." Her tears began. We continued to watch and share stories of the round. At one point I told a girl that I cried when I realized what time I needed to leave my home to get to the course on time. She smiled saying "see Coach, you cry too." I gathered the team together for one final meeting. I congratulated them, I thanked them, and told them I loved them. This moment however was shortened by a player's parent telling us to hurry up. They were giving away awards. 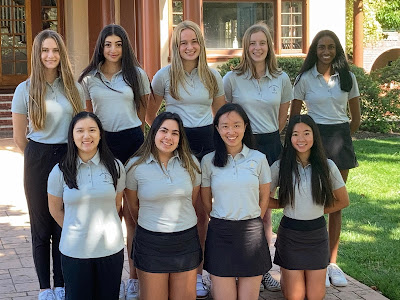 This impromptu, informal gathering was unexpected. One of my players earned a medal for finishing fourth overall. An outstanding teammate, we were overjoyed for her award. Moments later, our team was awarded with the third place trophy. We ran up for our hardware, embraced and celebrated the moment. Team pictures, selfies, high fives and hugs are what we will remember—tears and all.

In a non-pandemic season, I would drive the team to the match and most of their parents would pick them up and we would depart separately. The team van would be empty and I would begin the haul back to campus. This year, I left as I came—alone in my Jeep—but full of gratitude for the season that almost wasn't.

I turned on the radio, and I started to cry. Overcome with emotion, exhaustion, those feelings of self doubt and uncertainty, coupled by the others of thankfulness and knowing I gave my very best. So many tears.

I reached out to Haley to share all that I was feeling. She simply said, "Tears in or after a season only make it official. So happy for you!!"

Once again, coaching ruined my life....and I'm so grateful.

NB: and to women in particular. If you are thinking of coaching high school sports, please talk to me and to Haley. We have a lot to share.