Saints, Sacraments and I Came as a Shadow: Brief Insight into John Thompson 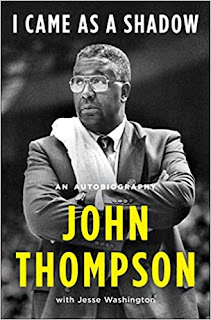 A friend recently admitted to me that he doesn't like the idea of saints. "I don't think the Church should get in the business of raising up certain men and women for veneration. It's too political." I have heard gripes about the process and the favor canonization has placed on those in religious communities over lay people before. I could say "The Catholic Church does not "make" or "create" saints, but rather recognizes them" but I understand. He isn't the first nor is he the last person to share such sentiments with me.

I have always loved learning about the saints; I consider them to be treasures in the spiritual life. Listen to Faith Fondue, my podcast and you will hear Haley, my partner, talk regularly about her 2021 resolution of getting to know more about these holy men and women. She has made a point to recognize their feast days and prayerfully ask for their intercession. Her enthusiasm encourages me to do the same.

While I appreciate the saints, I'm not sure I need them to nourish and sustain my faith. I do however need sacraments. Sacraments—both lower and upper case— are visible signs of God's invisible grace. They can be seen, touched, heard and smelled. Sacraments are formal and informal,. They are celebrated in a community and mediate God's mercy, love and peace. My faith deepened when I came to learn and see the many graces in my life—from unsuspecting people or unexpected places—are sacraments. To see the world through this lens is to have the Catholic imagination. 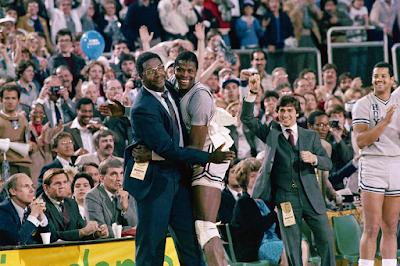 This vision equipped me to see the cover of the autobiography of John Thompson, "I Came as a Shadow" in a sacramental way. My former colleague and friend Bill, told me that the faculty at Georgetown Prep decided to read this best-selling book about the late Georgetown men's basketball coach this summer. After reading Confronting Racism in Basketball and the Jesuits: The Extraordinary Life of Georgetown’s John Thompson, a book review in America and listening to the ESPN Daily podcast, The Life of Legendary Georgetown Coach John Thompson Jr. I took notice. I shared this news with many other Jesuit educators. I wondered what they thought. I was excited to hear what Bill--a fellow Religious Studies teacher and coach would say about the book. But a few chapters into it, he wrote

I did not know that towel was a tribute to his mom who always had a towel over her shoulder while she worked and cleaned and fed her family.  She was a trained teacher with a college degree but could only clean houses.

That towel of which Bill speaks is featured on the cover. I have no idea if Coach Thompson always donned the same one or grabbed  from the locker room the first towel he could find. No matter. That towel is a sacrament. With the Catholic imagination, I recognize that towel as a visible sign of God's invisible grace. Based on the little I know, I understand that it honors the love and sacrifice of a mother for her family. Instead of the shame or embarrassment, challenge and strife that her job may have brought with it, Coach Thompson raised it for all to see. I find it to be regal and meaningful. It's sacramental.

Thompson was a practicing Catholic who was deeply devoted to Our Lady. He was so much more than just a basketball coach. He was a father, mentor, and lifelong advocate for  justice and equality. I won't go so far as to say he is a Saint, BUT I do believe that saints are sacraments. Virtuous and outstanding men and women are visible signs of God's invisible grace. I guess I need them, too.