Faith Fondue, my new podcast is a melting pot of topics, ignited the flame of faith and guided the Holy Spirit. My cohost, Haley and I proclaim on our show: No politics! as fondue features a Swiss cheese, and is therefore neutral. We are equal opportunity prayers; we pray for everyone.

Though this blog isn't overtly apolitical, it's not exactly silent no matters, either. Therefore, I would be remiss if I did not include Amy Coney Barrett's Opening Statement at the Senate Judiciary Committee Hearing from Monday, October 12, 2020 as number 13 on my 20 for 2020. You might not like her politics, but you can't deny that she speaks Sports &  Spirituality. 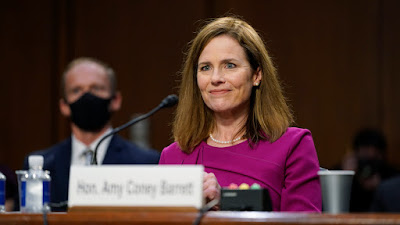 Near the end of her 15 minute speech, she states

I would be the first Justice to join the Court from the Seventh Circuit in 45 years. And I would be the only sitting Justice who didn’t attend law school at Harvard or Yale. I am confident that Notre Dame will hold its own, and maybe I could even teach them a thing or two about football.

As a final note, Mr. Chairman, I would like to thank the many Americans from all walks of life who have reached out with messages of support over the course of my nomination. I believe in the power of prayer, and it has been uplifting to hear that so many people are praying for me. I look forward to answering the Committee’s questions over the coming days. And if I am fortunate enough to be confirmed, I pledge to faithfully and impartially discharge my duties to the American people as an Associate Justice of the Supreme Court. Thank you.

ACB thanked her mentors and teachers, the female Justices who blazed a trail and concluded with football, faith and the power of prayer.

I would like Justice Barrett to know that I too sincerely believe in the power of prayer. Perhaps, however, she already knows that. Before her nomination. I reached out to Jesse—her husband/my classmate and friend—with an email entitled "Greetings and Prayers." I shared a few updates from my life and said I would pray for them. He responded "Thank you so, so much for the prayers -- we need them!"  I responded by asking them to pray for me, too.

In thinking back to this time, I was reminded of what I learned from a Holy Cross priest. who said "the Constitution of the Congregation of Holy Cross states that we "spend the least amount of time talking about the things that matter most to us." Those words written by Father Basil Moreau C.S.C still ring true.

A Supreme Court Justice takes a stand on issues that matter deeply to people, their lives and their livelihoods. When a woman or man is nominated to this position, their example affords us the opportunity to talk about what matters most...or not! 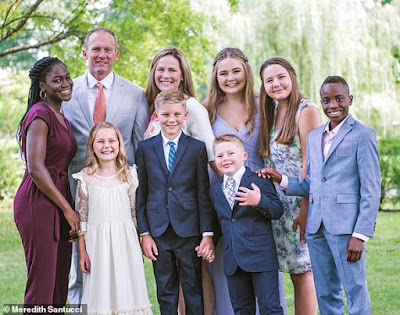 Notre Dame and sports, supporting friends and family—those things matter to me—but they are just the starting point...or rather the invitation for us to enter into the challenging conversations and complex questions we ought to have with one another, need to have with one another, for one another and by one another. Communities of faith should unpack whether or not prayer really does have power and why it is important. Is it? (I stated my answer above!)

In a time characterized by division, I want to say thank you to friends and family who have asked me my about my beliefs (and not made assumptions) in and around the nomination of ACB.  I appreciate those who go deeper and want to know "why."  I am grateful to those all those who have shared their own views, when similar and different from my own. I am thankful for those who had the courage to listen and to those who had the courage to be heard. We cannot continue to talk about the need for this in our country; we must strive to do better.
And, if we can talk Notre Dame or football along the way, even better.