When is the last time you were the new kid on the block? No matter what your age, entering into a new community isn't easy. You are the newbie. We all must earn our stripes. Working through a rookie season or on a new team takes time; it's an adjustment. If you don't believe me, just ask Tom Brady. And I put myself in this position two years ago, in the Fall of 2019 when I started teaching and coaching at Saint Francis High School. 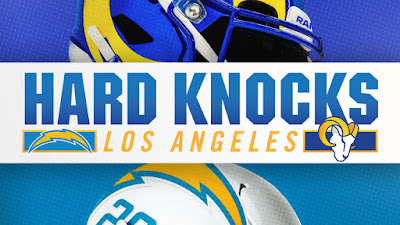 Thrilled by the actuality of being able to eat outside (there is no fog belt in Mountain View, CA) I saddled up to a table of six male teacher-coaches. I guessed this might be a safe space given that my colleague and partner—the JV golf coach—was with this crew. Everyone was welcoming and hospitable but this group of cronies were used to one another: their own six-pack. I listened, I ate my lunch and smiled. I am pretty good at those things. And then one guy started talking about the latest episode of Hark Knocks (Oakland). I could remain silent no more. I met a match, I found a friend and the first thing I said to him this fall as I returned to school is how much I enjoyed Season 15. Hard Knocks: Los Angeles is #12 on my 20 for 2020. 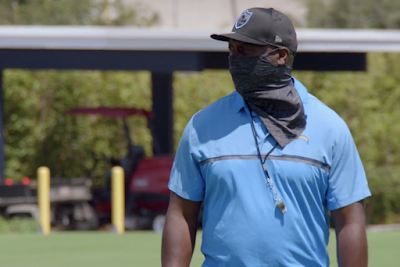 In case filming during the strangest season in NFL history isn't enough, this season the HBO docuseries profiled two teams for the price of one: the Los Angeles Rams and Chargers. Since its launch in the summer of 2001, Hard Knocks has always kept the focus on a single team. In the post Hard Knocks: Los Angeles' preview: What to expect this year Dan Hanzus writes,

And since they share a a respective home field—the state of the art, mesmerizing SOFI stadium—the double feature made sense and added to my enjoyment. Already a fan of compare and contrast, I appreciated observing the dramatically different personalities and coaching styles of Sean McVay and Anthony Lynn. And, I must add—coming from a COVID crazy compliance obsessed city, I couldn't stop critiquing the mask wearing styles (or lack-thereof)  between them. 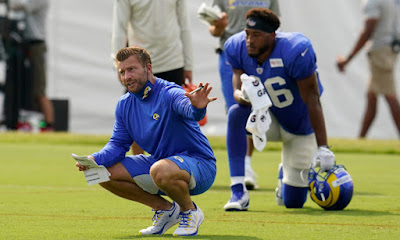 Hard Knocks has a winning formula of beats we've come to expect, and so many of those beats are simply not an option in the current climate. Ken Rodgers, VP at NFL Films and the showrunner for Hard Knocks, said "this first episode to us is starting to become a look into an American workplace going back to productivity in the midst of the biggest story in the last 100 years in American culture," Rodgers said. "It just so happens to be the industry is football, but anyone who watches this is going to recognize what people are going through." He added, that even getting the show to production in light of logistics was "maddening but also creatively inspiring." Rodgers and NFL Films had to rethink how they did everything.

I'm glad they did as three memories stand out for me that speak to the moments we have lived through, reflective of our time yet revelatory about football.

I have been tested twice for COVID (and tomorrow will be #3). One time, I self-administered the swab and the second time, I went to COLOR SF where professionals do this 1,000 times a day. I entered both tests with a reasonable amount of fear. Why? Because so many of the players—who are tested at minimum three times a week resist as seen here.

They admit to their fear of the swab. They complain that it is entering their brain. Their technicians promise them it won't hurt. The squirm and squeal; they get it done. This cracks me up.

Football is undeniably physical and demanding. These athletes are hit and tackled, run down and hit again but another human being who weighs as much as 30, 80 or 100 pounds more than they do. That necessitates fear....or should!

When I had my COVID tests and didn't flinch, for the first time I felt tougher than an NFL player. Thanks Hard Knocks.

2. So Fresh and So Clean.
The proper placement of music in a documentary sets me over the edge. I can easily move from fan to fangirl in as few as three notes. Hard Knocks knows football, and Hard Knocks knows good music.

Life in COVID-19 means much more than quarantine. It means cleaning and disinfecting, wiping and swiping a lot. For several weeks on the show, the players aren't even allowed to make contact on the field. They walk through plays and schemes. They train and condition outside and on the field. And when they take it inside to the gym it's in a venue that is as Outkast once sang "So fresh and So clean." What a great beat. Keep lifting guys. (I cannot

3. From Hard Knocks to Hard Hits
If you play football, you have to be okay with hitting and getting hit. My Dad yells "block you gotta block" more than any other charge to the players. Easy for him to say. However, as I mentioned, COVID prevented players from doing this in practice for several weeks.

At certain points during the workouts the players vented their frustrations on the sidelines. Joey Bosa of the Chargers opined time and again about missing that physical contact. I thought to myself of the irony—hitting it what shortens every players career. It costs them quality years to their physical well being, and yet they miss it.

The first day of full tackle football practice is noticeably different. There is a current of electricity, unseen before, The guys are smiling, they are focused and they are grateful to give and take their hits. Once again, the opportunity to compare and contrast, the before and the after...take a look.

Although I didn't return to that lunch table that often, I did enjoy checking in with my co-worker about each episode. He warned me about getting Hard Knocked. I wasn't sure what he meant until three episodes in to Season 15, I ordered a Chargers hat for my good friend Haley who is a longtime fan. When I ordered a second one for myself (hey! this is not a conflict of interest as I already have my NFC team), I knew exactly what he meant. I put that white hat on—so fresh and so clean—was met with a few questions on the golf course about my choice and was given yet another chance to talk about the show and my hopes for their seasons. Congrats to the LA Rams for their win over the Seahawks and I hope the LA Chargers keep building their team.