Every summer tor the past ten years of my teaching life, I have had the same goal: to get to the bottom of a basket that lives next to my desk. It is full of magazines, newspaper clippings, exemplary student work. My plan was to file or pitch, re-read or respond to special stories, profiles and spiritual practices. The basket hasn't gotten smaller, and the pile has only grown larger each and every summer. The good news, however, is that shelter-in-place afforded me with the time and opportunity to forge ahead and through it. I'm glad I did as the announcement of Philip Rivers' retirement after 17 seasons in the NFL isn't Number 17 on my 20 for 2020....but information about him from that basket is! 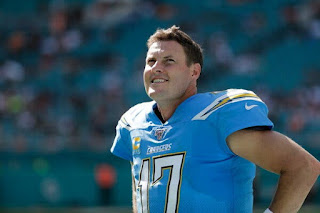 On Inauguration Day 2020, the public learned that the 39-year old quarterback is now pursuing another opportunity in the game of football. This fall, Rivers, will coach football at Saint Michael's High School in Fairhope, AL. I imagine they are accepting transfer applications.
Rivers is popular and he is polarizing; I'll let you make the call. Professionally, it's hard not to respect all that he has done. Though he never got to the Super Bowl, Rivers stands fifth all time in passing yards and touchdown passes. He started the final 240 games of his career without interruption. This stalwart stat is second to Brett Favre's streak of 297 games. Personally, he has been known as a great teammate, but a challenging one. He is outspoken in many things—what he expects on the field, and  in particular about his Catholic faith. For that reason, I remembered and recorded these two insights from a Catholic publication—which I tossed after transcription. I found both to be very interesting! Enjoy. 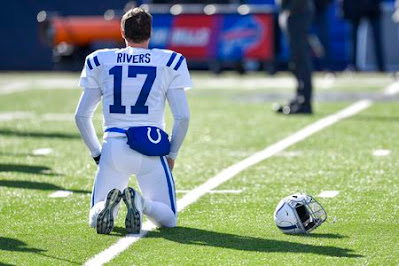 What kind of temptations and challenges have you had to face as a football player?
The biggest key to avoid those temptations is to not put yourself in those situations. And it’s not just as an NFL player, it’s in any workplace, in any city, anything you’re doing, anywhere after dark, after midnight. I think it’s Corinthians 11 that says “Bad company corrupts good morals.” If you’re not in the wrong but you continue to put yourself in tempting situations eventually may give in. So that’s always been something I’ve lived by all the way through – don’t put yourself in those situations. Even though you may be strong enough to go somewhere and not fall into sin, avoiding it from the start will certainly help.

You’re known for your very passionate style of play. How do you talk trash as a Christian?
I am known as a trash talker, but I’m not saying any trash out there. It’s all in fun; just like you would give a little jab to your brother in the backyard, it’s the same way out there. You know, as I grew up with my dad being my coach, that’s the way he coached—with a great deal of passion and energy. So that’s just the way I’ve done everything. I play the game like I did when I was a kid in Alabama, even though there are a lot more cameras and people paying attention. And the trash talk is nothing I couldn’t go home and tell my wife or my mom. That was the thing that really got me through some of the bumpy roads. That I knew I didn’t have to defend anything that was wrong But I did understand the way anything can be spun by the media, so that was a learning lesson for me. 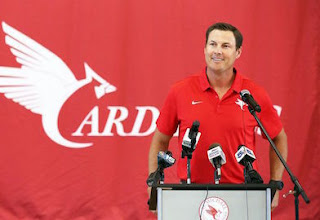 In his new position as head coach of the St. Michael's football program, Rivers will be able to help young people not only talk trash but play the game with passion and energy. And, when he leads his team in prayer, especially the Our Father, he can not only pray "Lead us not into temptation" but teach a little more. Congratulations Phil and good luck Coach!
Photo Credits
Coach
Main Shot
Kneeling
Posted by Anne Stricherz at 10:41 PM