Spieth be with you: Pithy & Playful Insights from the 2017 Open

I turned around to extend the sign of peace to my friend Matt and instead of saying "Peace be with you," he said, "Jordan Spieth."

His words brought something other than the peace of Christ—they brought joy. I'm a Spieth fan and ten hours earlier, Spieth won his first British Open title as well as his first major since his championship at the 2015 US Open, Chambers Bay. His fans and followers have been wondering when—or if— the former number one player in the world would shake off his epic collapse at the 2016 Masters and win his third major. Today was the day. 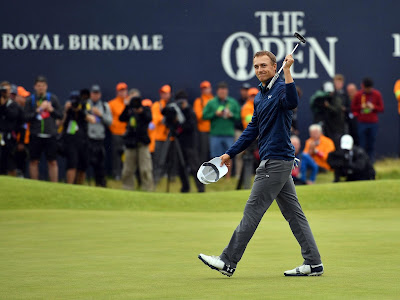 So what does the 2017 Open Championship offer us? Unfortunately, I can't say as much as I would like. The time difference and my return travel from Israel prevented the screen time I prefer for the majors. However, what I did see and have discussed with friends helped me to develop a few pithy and playful insights. Enjoy!

I write this fact for purposes of clarification and because the simplicity of this title has given me pause to think what other events in sports or music need no descriptor. We don't say "The Series" or "The Cup" or "The Finals." There must be some parallel. Any thoughts? 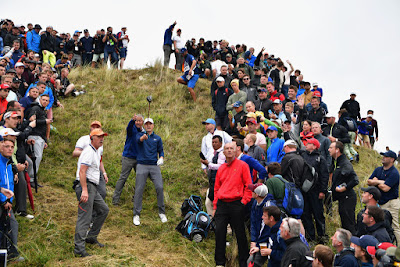 2. Why should you care what anyone thinks?
My mom has often told my sister and me "you care way too much what other people think." She has urged us to let go of what we cannot control, and ultimately what is none of our business: That is, what other people of you.

Spieth's victory is a shining example of the benefits of not caring what other people think.
Golf fans were abhorred by the delay he caused. His deliberation that lasted well over 2o minutes was deemed by some sports fans as unacceptable, but that is only in a social context. How Spieth executed the rules on the 13th hole was masterful. Though he got two significant breaks in the process, he gained these so called "advantages" in a way that did not compromise anything. Some say he "took advantge of the rules." Yes, he did, but that statement need not be pejorative. For more information, this article from Golf.com sums it up well.

3. Everyone has a doppelganger.
One of the best compliments I have ever received was a college professor who praised me for being very observant. He told me why this is an important quality, especially in a young person. Twenty years later, my observation skills have taken on a life and mind of their own and transpired into a seemingly harmless habit. I study people and their mannerisms intently until I can name their doppelganger. I am rarely afraid to tell people who they remind me of, and when I find a good match, the feeling rivals holding 21 in Blackjack.
The principal of the school where I teach has a doppelganger in Matt Kuchar. I have a cousin who is a dead ringer for Zach Johnson. Someone once mistook me for Paula Kramer. Kidding. But as I was watching Kooch on Saturday, I couldn't help but think of my boss and their similarities. I already have a lot of fun watching golf, this habit makes it that much more enjoyable. Watch out friends....

4. There's no Booing in Golf.
Go to a Springsteen concert and you will hear what sounds like a long and extended Boo. You hear this guttural exhortation both before and after most songs and even when the Boss is talking. The unsuspecting Springsteen fan or Bruce neophyte looks around with one eyebrow raised. He or she is glancing over their shoulder with a furrowed brow... until there's some sort of intervention. "They're yelling Bruce." I'm not sure if Springsteen likes it or not, but it's the "Bruuuuce" cheer is nearly a verb.

I share this story because it prepared me for what golf fans, typically known for their ability to keep quiet, lay low and clap appropriately, yell when Matt Kuchar comes around. Kooooooch. Again, the unsuspecting fan will certainly be taken by surprise, but for those who follow the tour, it's no surprise that Matt Kuchar is a fan favorite. And why shouldn't he be? His broad smile, the hole in one at the Masters, the Sketchers, the gait, putting stance and hair color that makes him look 20 years older than he actually is?! Matt Kuchar is America's sweetheart. Kooch your heart out golf fans.... 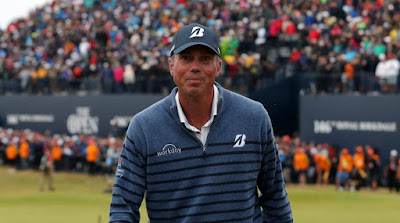 5. Championships/Sports Events can also serve as Benchmarks
Last year, I was invited by a dear friend to join him and his family for a round of golf at their remarkably beautiful club. We watched the epic 2016 showdown between Phil Mickelson and Henrik Stenson over breakfast before we played 18. It was an idyllic day: great company, gorgeous weather, and fantastic sport—peronally and professionally.

On Saturday—known as "Moving Day" at the Open, I reached out to him to recall the memories from the year prior. I said we were due to play golf again at our club here in San Francisco. As fate would have it, he had an opening for a fourth player on the same day, same location one year later! I raised my Claret jug (kidding) and jumped at the chance.

Birthdays, anniversaries, and holidays are natural and important times to reach out to family and friends but as I realized this past weekend, sporting events and championships can too. I can tell you exactly where I was and who I was with watching the 2015 NBA Finals. I love recalling those memories and am convinced it's worth doing when the event occurs the year after, and more.

In conclusionI can't give you an exact percentage, but I can say with confidence that the major championships in golf live up to their hype. Golf on its greatest stages offers much more to celebrate than the excellent competition and incredible feats. I love what the four days of the tourney reveal about humanity, the challenging importance of the rules and what we think of it all, especially...the victor. Spieth be with you, my friends.

Posted by Anne Stricherz at 9:36 AM