Life After Football...or the School Year: What I Have Learned from AJ Hawk

Though I have been teaching for nearly 20 years, people still ask me about summer vacation. They want to know how that works...What's like to have that much time off? they query. I want to know: Did they miss the memo? Is there something I know that they don't? "Yes, I get June, July and most of August off," I say. I will not apologize for this. I don't know another teacher who resents this benefit, but I have to let you in on a secret. As much as I love the freedom and well-earned break, the time away brings great joy and subtle challenges. Reading "Life After Football" by AJ Hawk made me think that retirement might hold a few similarities. Let me walk you through how that works, not in the NFL, but among educators. 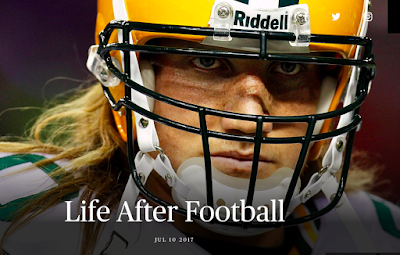 The first week of summer break is the honeymoon period. Everything about the world is right. I walk on Cloud Nine 24/7.  I am convinced I will read every book on my shelf and article in that stash near my desk. I intend to work at the Food Bank every week and attend Daily Mass every other. I cook, I bake, I clean and I paint. I am teacher, here me roar.

By week two, however, normalcy creeps in....and teachers are largely unfamiliar with anything normal. I don't know what to do without a bell or a meeting with a student, colleague or parent. I miss the eye rolls, the snarky comments as much as the laughs, the learning, the hugs and the tears. Those 120 young people entrusted to my care are at their camps and in their cabins. They're waking up late and growing big and growing up. I, however, don't change....but I do, it's just not easy to figure out how when you don't have papers to grade and lessons to plan.

By July 4, fear begins to creep in. I realize that a month of summer and the solstice has passed. An imaginary countdown has begun; I am in denial. I recommit to waking up early and working out, reading my second book for the summer and saving some money...maybe....well, at least for Tahoe.
After Independence Day, I turn my sights to my salvation: Lake Tahoe. Tahoe is the site of some of my greatest childhood memories. My family went to Incline Village during the first or second week of August every summer. The natural beauty, fresh mountain air, the crisp water, and massive non-sequitur: Harrah's video arcade, made for the vacation of our dreams. My brother, sister and I loved playing Ms. Pac Man, Centipede and watching "Charlie and the Chocolate Factory" in this den of iniquity. Today, I still return to Tahoe, for many of those same reasons...minus the arcade, plus the casino AND most importantly, the American Century Celebrity Golf Classic.

For the past four summers, I have traveled with a group of friends known by many of the athletes and celebrities. Team Taboo is there for the golf, the view, the personalities, Fireball and the memories. The tourney will be taking place starting tomorrow and I will be missing out. I earned the Tauber Fellowship for a 3-week program in Jerusalem and though I was thrilled to have this once in a lifetime opportunity, I knew I would miss this annual event in Tahoe. Team Taboo said they would represent; I know they will....as will AJ Hawk. 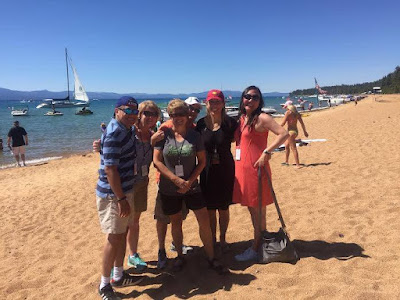 I now receive daily e-mails from "The Players' Tribune," a website founded by Derek Jeter that publishes first-person narratives from (popular) athletes. Having seen Hawk at the Tahoe tourney the past four years is why I decided to read his piece.  Reading his words made me realize that I too have always had a problem saying "no." I absolutely love that this championship linebacker has decided to make something that many people see as a negative into a positive. Though not a "glue guy" I do think it's safe to say his desire to have fun, be there for others, and make a difference in ways big and small make him a mensch.

I invite not only those who face retirement to consider what he has written but teachers, as well. What can we say "yes" to during our time off? Who needs us to give and not count the cost? How can we make the most of our summer break? And help ourselves, and others have more fun?

I look forward to hearing from Team Taboo about Hawk's antics at this year's tourney and I can't wait to say "yes," to what else summer 2017 brings...I already have American Century Golf Classic 2018 on the Calendar. Yes, yes, yes....

Be sure to at least check out the video of AJ saying yes to these fans' request. ENJOY

Posted by Anne Stricherz at 1:41 PM