Serendipitous Friendships: In Springsteen and in Sports

I repeat the quote by Matthew Kelly in every class I teach and with each team I coach. He has said, "the friends you keep are more important than the books you read." I have yet to encounter any resistance to his words. Rather, I find an audience nodding in universal agreement. We know we can't choose our family, but we do have a say when it comes to choosing friends. And let's be honest, some of us get lucky—really lucky—when it comes to them. My mom always says "you make your luck," but I think there is something serendipitous about certain people that enter into our lives.
I've made some of my closest friends through school, work, sports and my faith. Many of these relationships are nourished by common values, similar interests and a shared passion. But I would by lying if I didn't admit that some of my favorite people in the world have become my friends because of one particular preoccupation: American singer, songwriter and performer: Bruce Springsteen. And, watching the CBS Sunday Morning show's interview of the Boss offered me more than another opportunity to reach out to those buddies with whom I love to "speak Springsteen."

From the conversation between The Boss and Anthony Mason, I was reminded that the miracle of friendship that can be born between two unlikely people, at unsuspecting time or in inconspicuous places. And, it is shaped, formed and sustained through sharing our talents, abilities and ourselves. 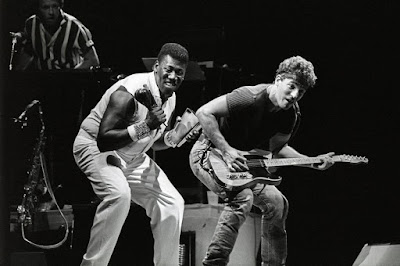 In what may be one of the more beautiful treatises on friendship, when asked “How would you describe your relationship with Clarence?” Bruce said:


“It was very primal,” he replied. “It was just, ‘Oh, you’re, you’re some missing part of me. You’re some dream I’m having. He was this huge force, you know? While at the same time being very fragile and very dependent himself, which is maybe what the two of us had in common. We were both kind of insecure down inside. And we both felt kind of fragile and unsure of ourselves. But when we were together we felt really powerful.

“We were very different people, you know? Clarence lived fast and loose and wild and wide-open, you know? And I tended to be a little more conservative.”

“You said offstage, you couldn’t be friends.”

“I couldn’t because it would ruin my life!” Springsteen laughed.

“But Clarence could be Clarence excellently. He was very good at it.”

Until Clemons’ health went into a long decline. In 2011 he suffered a stroke and died days later. “Losing Clarence,” Springsteen writes, “was like losing the rain.”

I thought of the rare and wonderful chemistry that existed between Bruce and "C." At 6"5" and somewhere close to 280 pounds Clemons was a force, but that force was magnified by who it met and what it became on stage. It wasn't just part of the show, it was a gift for all who love both men and their music to witness the dream. 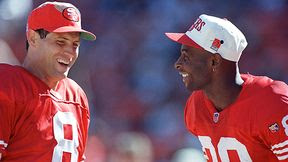 Springsteen is indeed a poet, a performer and a musician...so I shouldn't be surprised by the loveliness of his words. His insight into friendship invited me to think of others who might share this type of gift. My mind considered former teammates like Steve Young and Jerry Rice, Chris Mullin and Manute Bol or Kareem Abdul-Jabar and Magic Johnson. These friendships pair two very different men who collaborate and create something greater than themselves. And then I realized perhaps that's exactly why Elie Wiesel said, "Friends are the jewel of life."

True friendship asks us to be nothing more than we are...if we are fragile, we should be fragile. If we're insecure, a friend lets us be insecure. He or she may actually get what that means. And if the other is loose and larger than life, let him or her run with it. Know who you are, what you can do and delight in the other half. The whole is greater than the sum of its parts.

All Springsteen fans are grateful that part of Clarence lives on with the E Street Band in Jake Clemons, the new saxophone player. But, we also know that change that was made uptown when the Big Man joined the band, formed something "really powerful." Losing the rain has left us longing for the day when there's a Reunion tour of another kind....thank you brother man.