Beauty and Sadness in Sports and in Spiritual Places Part II: Doc and Darryl...The Sadness

As written in the first part in this series, If Pixar's animated hit "Inside Out" is a story of the how joy and sadness can coexist, the "30 for 30: Doc and Darryl" affirms that beauty and sadness can and do. Ask anyone who has seen the latest in installment in ESPN's documentaries that aim to highlight important people and events in sports history, and I think they will leave you with the impression that "Doc and Darryl" is colored more by sadness than by beauty. However, both truths are worth reflecting upon and learning from. 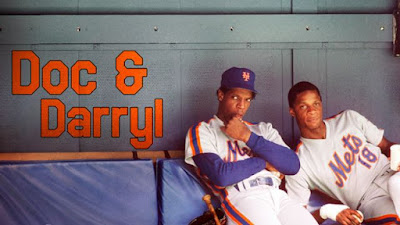 The stories of Darryl Strawberry and Dwight Gooden seem inextricably linked, whether the lives of these two very different men are actually intertwined or not. Both phenoms drafted by the Mets straight out of high school, their parallel meteoric rises in early-1980s New York and the demons that plagued them turned these two superstars and franchise saviors into tabloid fodder and punchlines. We were interested in understanding the men behind the headlines, and what drove them to their spectacular highs and lows. We hope that this film humanizes Doc and Darryl, and in doing so sheds light on issues that we can all relate to in our own lives or the lives of those around us.

The directors succeed. The film does more than humanize these two great athletes. It sheds light onto the beauty and sadness of their success, their life stories and our society. 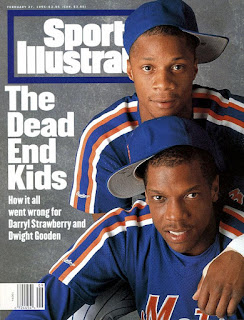 In many ways, it is not easy to relate to either athlete. Gooden and Strawberry met great success at a young age in a media saturated and star studded city (Doctor K was 21 and Strawberry was 24 when the Mets won the '86 World Series). Overnight, they were wealthy, and famous as world champions. And yet, the source of sadness in this tale is a universal one. "Doc and Darryl" is a honest and real look at the face of addiction, a disease that does not know age, race, color or creed.

I don't know if it's medically certifiable that some folks have an addictive personality or not, but those who struggle with addiction carry a heavy cross. Addicts don't call it the "monkey on your back" for nothing. Addiction tares lives apart. It ruins marriages, families, and most relationships. For Dwight Gooden and for Darryl Strawberry addiction did that and much more.

The low point of Gooden's addiction must have been when he missed the World Series parade because of the extent of his usage guised in the name of celebration. For Strawberry, it was a very honest admittance that he let his mother down...and he knew it. But what might be even more heartbreaking is what we never saw—because of Doc and Darryl's addiction to crack, cocaine, and alcohol.

Other personalities such as their former manager Davey Johnson and baseball writer Tom Verducci weigh in, complimenting Stewart's claim. And then Jon Stewart adds,

I feel strange being upset that I wasn’t able to witness as much of their greatness as I should have. That’s probably not my heart ache to have…it’s theirs.

If Stewart were to share those poignant words with me personally, I would nod in agreement. It's hard to disagree...and yet I do. 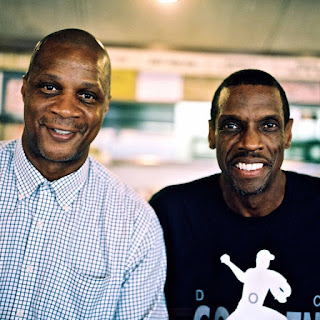 My fundamental view on professional sports, especially the high profile ones...the sports where the athletes are near celebrities who stand on heroic pedestals (whether they want to or not) is that when our team, our favorite athlete, or our coach succeeds, we all do. When they lose, our hearts break too. In their greatness we applaud them...and in their downfall we cry, and we lose. How can you say it was not the ache of Mets fans...of African American baseball players and fans....or of those who love to see great athletes play a beautiful game? It's both their heart ache and ours.

I think Doc and Darryl is important to watch because it reminds us of an important, though sad truth: Addiction is ever present. Though the viewer will guess that Gooden is still struggling and Strawberry is not, any addict will tell you how dangerous it is to think that addiction is a thing of the past. The narrator says,

We are all called to live every day, one moment at a time. For addicts in particular there is no other way to live.

I don't necessarily think that is a sad truth. I think it might even be a beautiful way to live. And the next posting will address that beauty and more, as seen in "Doc and Darryl"

Email ThisBlogThis!Share to TwitterShare to FacebookShare to Pinterest
Labels: 30 for 30, baseball, Mets