Beauty and Sadness in Sports and in Spiritual Places Part I: the Oklahoma City National Memorial

The 2015 Pixar hit "Inside Out" is the story of a young girl, Riley Anderson and five personifications of basic human emotions: joy, sadness, fear, disgust and anger. Each one comes to life and influences her actions via a "console" in her mind. As she grows up, her experiences become memories, stored as color orbs, some of which are sent into long-term memory each night.

But discord erupts as Riley comes to realize all of her core memories are joyful memories, but her move to San Francisco, so far, offers sad ones. She recalls the good times at her childhood home in Minnesota and her love for her family and friends who are now thousands of miles away. She begins to question the purpose of Sadness and strives to keep it away from the console in her mind —the control center for emotions. But as she must learn, sadness is part of life. Riley must accept this hard truth, and an important character Bing Bong helps her understand not only why but how sadness and joy can co-exist, offering a fuller though more complex reality.

Recently, I've thought a lot about a modified plot of "Inside Out." Rather than making room for competing emotions, my mind has been trying to reconcile and recognize how beauty and sadness can walk hand in hand. My trip to the Oklahoma City National Memorial and watching the 30 for 30 "Doc and Darryl" has asked me to understand and appreciate how experiences of each reflect the depth of our humanity.

At the NCEA convention in San Diego last April, administrators from Bishop McGuinness High School asked me if I would be willing to travel to Oklahoma City to speak to their coaching staff. With humility and without reservation, I said "yes." An American Studies major through and through, I truly enjoy visiting the states and cities that comprise our nation, and in particular those of our heartland. My only personal request was to visit the Oklahoma City National Memorial (ok...and play a round of golf with some folks on staff).
The campus minister and his three daughters accompanied me to the site. In a state that is less than 5% Catholic, I was a little surprised to discover that we pulled into the parking lot of what was once their Cathedral, St. Joseph Catholic Church. At the edge of their property, they added to the Memorial walk with a statue of a despondent Christ. He stands on a podium inscribed with the shortest passage of scripture, John 11:35 And Jesus Wept.

Joe asked me what I already knew about the events of the tragedy. I pieced together a few ideas: ....Timothy McVeigh, who has since been executed drove a Ryder truck....the event took place on April 19, which is Hitler's birthday and the same date (not year) as the events at Columbine.... the federal building also housed a day care center...and young children died in the attack.... I appreciated that he asked me what I knew and wanted me to experience the memorial at my own pace, but together with him and his daughters. I think it's important to encounter a difficult place with others while allowing each individual to walk where and how they need. 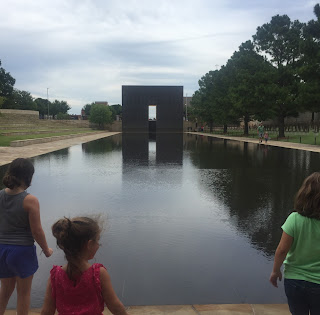 Like many memorials, the gates outside still have flowers, rosaries, posters, pictures and mementos honoring those who died that day. Regardless of city, state, or country, remembering the dead in earthy, tactile and personal ways is what we do.

The memorial spans 3.3 acres of land that once housed the Alfred P. Murrah Federal Building. Nine stories tall, it housed offices like the DEA, Social Security Administration, Secret Service, Department of Veteran Affairs and the Bureau of Alcohol, Tobacco and Firearms, among others.

The explosion that took 168 lives in that building did not completely destroy it. I learned that the remains of the building were imploded and N.W. 5th Street, where McVeigh parked the truck with its explosives, is now closed. The Reflecting pool in its place "helps soothe wounds; with calming sounds providing a peaceful seating for quiet thoughts." (brochure)

The space is framed by two bronze walls known as the Gates of Time. As written on the brochure from the museum,

The magnanimity of space between the Gates of Time symbolizes the shared and open wound of this act of terrorism. And in its architectural design, it conveys a sense that it's not just a city or state that carries this loss, but our nation as well. 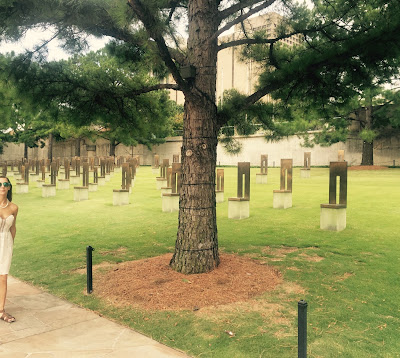 In contrast to the communal message of the reflecting pool, just beside it stands the Field of Empty Chairs. This intensely personal space, again through architecture, captures the catastrophic loss of life.


Each of the 168 chair symbolize a life lost, with smaller chairs representing the 19 children killed. Arranged in nine rows, one for each of the nine floors of the building, they are placed according to the floor on which those killed were working or visiting. Each bronze and stone chair rests on a glass base etched with the name of a victim. By day, the chairs seem to float above their translucent bases. By night, the glass bases illuminate beacons of hope

I had to wonder if this tribute influenced the 9/11 Memorial at the Pentagon in Washington DC.

From the Field of Chairs we moved toward the Survivor's Wall and then the Survivor Tree. Like the Callery Pear tree at the  9/11 Memorial at Ground Zero in Lower Manhattan, the

90+ year old American elm bears witness to the violence of April 19 and now stands as a profound symbol of human resilience. The message it sends to visitors reads: The spirit of this city and this nation will not be defeated, our deeply rooted faith sustains us.

Joe who proved to be an outstanding tour guide shared with me that he had taken his family to visit the 9/11 Memorial during their summer travels to New York. Standing underneath OKC's survivor tree we discussed what was moving and significant about each space, as well as a few similarities, e.g. the symbol of the tree, the integration of water, the naming of those killed. I then asked if he had seen, in New York, what a friend pointed out to me. Several women were named along with the words "and her unborn child." 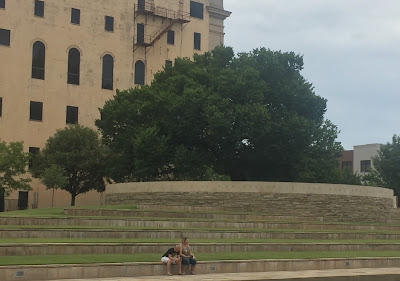 At that moment I had to turn away. Tears filled my eyes as the gravity of this place had taken its toll. I shifted my gaze back to the survivor tree and looked up under its branches hoping my eyes would absorb the pool of tears.

Joe said "I didn't see that. These places are hard, but even in the midst of sadness, there's beauty in the world." Looking at the full scope of the Memorial, it was very hard to disagree. The beauty of the space, its spirit, and sanctity fill the heart. A heavy heart, but a full one.

Joy and sadness...even beauty and sadness weave the tapestry of our lives. How I wish that places like the Oklahoma City National Memorial did not exist. But they do and though the tragedy of the events must be remembered, I thank God that beauty helps us along the way.

The next posting will feature the beauty and sadness of the stories of two baseball greats: Dwight "Doc" Gooden and Darryl Strawberry.

Photo Credits
Inside Out
Posted by Anne Stricherz at 9:24 AM