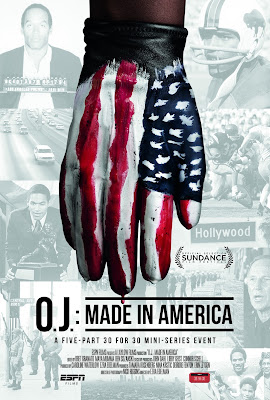 For the past five years or so, I have made a point to watch a baseball movie over the 4th of July weekend. Independence Day is my favorite holiday, I love baseball, America's past time, and as an American Studies major, I celebrate this country's relationship between sport, leisure and culture—a rich, diverse and complex one.

But this year, a different movie has taken hold of my thoughts and imagination. It's one not without controversy. Many people wonder why I would spend 7 hours and 43 minutes watching it. If you've seen parts of this "30 for 30" film,  you know why. It's haunting. It's a look into America's original sin. It's humanity at it's worst. It's OJ: Made in America.

"OJ: Made in America" is split into five episodes and has been airing on ESPN since early June 2016. I caught Episode 3 with my brother as we switched back and forth between it and Game 6 of the NBA Finals (there are a lot of ads in playoff games). And since that first viewing, I have tried to make sense of the man, the narrative that he carries and the cultural climate of the past and present. Here are but a few thoughts of what I've thought about. Please share your own.

The very first scene
Pay attention to the very opening scene. The three-minute interview between OJ and two employees at Lovelock Correctional facility symbolically captures what will unfold—"a saga of race, celebrity, media, violence and the criminal justice system." I also think it speaks to the genius of the director, Ezra Edelman. 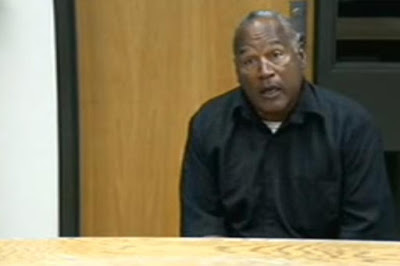 OJ is asked to account for how he has spent the past five years in the penn. He speaks about the responsibilities he had when he first arrived and what he is doing today—working in the gym and cleaning the equipment. As he begins to boast of a team he coaches inside the prison, a familiar OJ—the one that America loved emerges. He brags in an unassuming way about the success of "his guys." His story, however is interrupted by the female employee. She asks him "How old were you when you were first arrested?" Her question is totally unrelated to the prior one. It has nothing to do with his report  and yet it does. OJ's first arrest has everything to do with who OJ was, is and will be—as much as he would like to forget.

The Music
I enjoy reading the inside of an album/CD cover: lyrics, who wrote the song, the dedication, the names of band members their instrument: drums, keyboard, guitar, base, percussion, etc. However, one item on that list was once confusing to me: vocals. I had not thought of the voice as an instrument. That realization, that truth helped me to understand that in many songs, the voice isn't the only instrument that tells the story. We can also learn the meaning of a song from a violin that "speaks" the lyrics. For example, in Springsteen's hit "Bobbly Jean," the final minute plus features Clarence Clemons on the saxophone. That sax is telling the final chapter of the story. My imagination gets to figure out what that is. 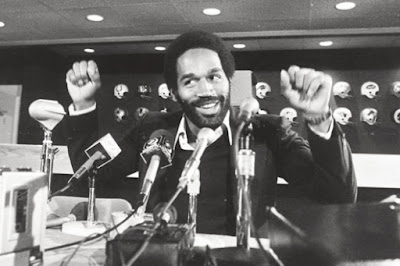 I say that because the music used in "Made in America" is as haunting as the story is. It's brief at the introduction, and upon the conclusion of each of the five episodes, the screen fades to black and music with a strong trumpet resumes. It says so much, without words. Listen to it.

Where do you LIE?
For his sheer giftedness in athletics, it's hard to believe that OJ's golf swing is as raw and ugly as it is. It's almost painful to look at, but nearly every episode features OJ on the course, playing with friends, breaking racial barriers at certain clubs and exercising that swing. It's safe to say OJ played a lot of golf—enough to be considered, well...a golfer.

Golfers know certain rules in the game are sacrosanct, and one of them is honesty. You keep your own score, but if you're playing competitively, you are asked to tell those you are playing with what you shot, or where you lie (meaning, I've hit three balls that are fair so I'm lying three, hitting four). Several of OJ's friends describe how dishonest OJ was when he played golf. He had a hole in the pocket of his pants and would let a different ball drop through them if he hit out of bounds or in the rough. His golfing buddies each shared the same story as well as the same response. I didn't know what to say to him or I never called him on it. 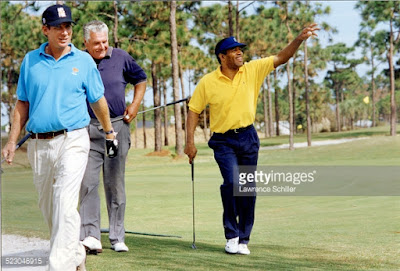 I believe when you are dishonest in one area of your life, it shows up in other ways too. I say that with the utmost humility, as I've seen that in myself. But I hope the metaphor here is obvious. When I am dishonest, my actions and words affect other people. Nothing is in isolation. Hopefully people who love and care for me will call me out on it. It's not easy to do, but it's important for personal growth. OJ's dishonestly, extended far beyond the golf course. He was a known womanizer, unfaithful to both Marguerite, his first wife and to Nicole. In that sense, Where do you lie? has another meaning.

I think honesty is something everyone must work at daily. Although we expect people to be honest, and though we assume it's a given, I think it's where the devil loves to play and reap rewards. (read "The Screwtape Letters" for more information on this topic).

The face of Courage 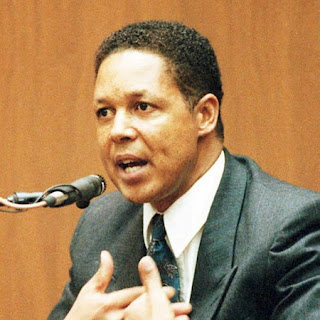 One of my favorite units to teach in "Foundations of Ethics: Morality and Justice" —a truly remarkable course—was Care for Creation: Environmental Ethics. Through this curriculum I learned about the Goldman Prize. The 2009 winner is a woman named Maria Gunnoe, who fought against "environmentally devastation mountaintop removal mining and valley fill operations in her home state of West Virginia." Because my students don't know much about this issue, I share a video clip about her and one respondent's words have stayed with me. Don Perdue a member of the WV legislature describes her by saying: "irrespective of how you fall on a particular issue, when you see courage raw exhibited courage,then that's something you have to pay attention to." Perdue nailed a feeling, a reaction I've had in my own life. When I watched "Happy Valley," Amir Bar-Lev's investigative look into the Penn State scandal, I sat up straight when Jerry Sandusky's adopted son Matt admitted that he had to testify against his father. And I would like to say that I saw courage when LAPD officer Ron Shipp took to the stand to testify against OJ.

Shipp had been friends with OJ since he was a teenager. His brother had played football with "the Juice." Shipp weighs in throughout the documentary. He was happy to do favors for OJ in the past and OJ consulted him very shortly after the murder. Shipp appears, gentle, honest and very credible. As a viewer, I found myself listening to his words without suspicion. I was not expecting that he would testify against OJ, but as the story unfolds, you understand that he had to.

Ron Shipp saw the photographs of Nicole Brown Simpson at the crime scene. The documentary flashes over many of them. They're horrifying, barbaric. Shipp's voice quivers as he recalls the first homicide he witnessed as a police officer. "It's something you never forget." He has to stop talking, as the tears he choked back for the 19 year old girl who was violently murdered.

Whereas some of OJ's life long friends value loyalty, I believe Shipp values honesty and justice. In caring for OJ, he came to care for Nicole. And what he saw and knew (he heard OJ give three different excuses for what happened to his finger the day after the murder) he couldn't live with himself or others, without speaking the truth. He knew it would cost him his friendship with OJ; he was aware that he would accused of betrayal, but he had to do what is right. I think that takes guts—true courage.

The defense did everything in their power to destroy his character. But even twenty years later, I see that his courage trumps all. Mr. Shipp, your courage, raw exhibited courage is heroic to me. 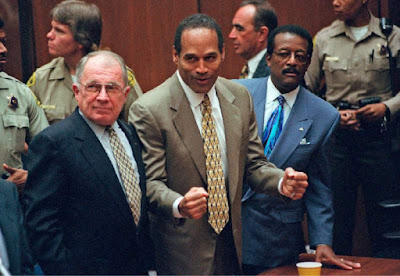 The danger of Charm
Every Jane Austin novel I have ever read includes one character who has a fatal flaw: they are charming. Initially I did not understand why charm is a bad thing. Seemed to me that a charming person makes you feel good, they hand out compliments with ease, the capture your attention and you want to spend more time with them. But Austin shrewdly teaches her reader that charm is not a virtue because ultimately, charm is self-serving. A person exercises charm so that you will like them. I want and need you to like me because of my ego, not because I care about you, not because I want to make you a better person, or help you grow more human.

After his time in the NFL, Simpson pursued a career in acting. Had he sought a part in "Pride and Prejudice" he would have played Mr. Wickham well. Simpson's charm is hard to deny. Episode 5 chronicles Simpson's life after the Civil trial. It was unsettling to see how many people sought to take a photograph with him, chasing him down for an autograph and more. He appeared on a radio show and the hostess says "I did not want to like you one bit, but I hate to say it, you're simply charming, OJ." He laughs and leans in for a big hug. His charm is part of what made him the star he became. Is it fair to question the role it also holds in his downfall? 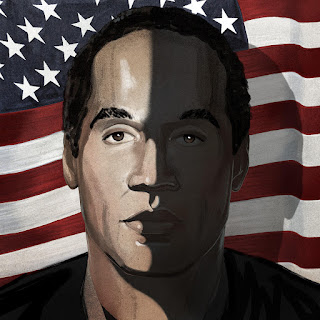 I was old enough to watch and understand it all, but I missed a lot of the OJ case in real time. I feel as though I didn't watch any TV the entire four years I spent in college (maybe that's a good thing?!). For example, I never watched "Friends" or "Seinfeld" until they became re-runs. I remember the Bronco chase and where I was when the OJ verdict was handed down, but most of Edelman's project—a deep dive into "Simpson's rise and fall and how it reflected issues of race, the atmosphere in Los Angeles and the relationship between the police and the black community" was new to me. I was fascinated by the 72 subjects he interviewed, the uncompromising and sensational images and unseen video footage.

This tale is a tragic one; it's a hard look into the best and the worst of what this nation can create. I expounded on five ideas, but could have written about 50...or 500. And I'll admit, I didn't take on some of the hardest ones I've thought about. But that's what we must do—what I must do —to get a better sense of who and what America can make in the future.

Photo Credits
30 for 30
Ron Shipp
Lovelock
OJ with the Press
Golf
Dream team?
Complexity of race
Posted by Anne Stricherz at 11:05 AM

Email ThisBlogThis!Share to TwitterShare to FacebookShare to Pinterest
Labels: 30 for 30, Golf, Made in America, Nicole Simpson, OJ Simpson