Having Some Fun with a Pillar in the NFL: Bill Belichick 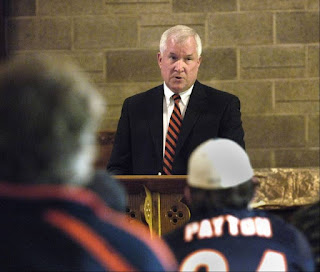 I'm excited to share that I am officially a team member to a new venture: SportsUp News. The magazine is still in its early phases and I will be writing and contributing to its material, outreach, webpage and more in the year to come.

Thanks to the managing director, I was able to interview Pat McCaskey— Senior Director of special projects for the Chicago Bears. The grandson of George S. Halas, Sr, the founder of the Chicago Bears football team, McCaskey is also a Bears board member, author, and public speaker. He is especially fond of writing about history in sports, in particular, football. As such, he has four books to his credit and one of them "Pillars of NFL Coaches Who Have Won Three or More Championships examines the rich history and lives of the greatest coaches in NFL history, and their contributions to the game.


Here is an excerpt from an upcoming story "McCaskey “Bears down” on Faith, Family and Football."


McCaskey said “I was simply curious about which coaches had the most championships, so it was a very interesting project. The first part of it ended up as the appendix: a listing of the championships and coaches from 1920 to today. I compiled how many championships each coach won.” 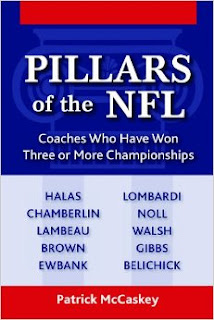 “I limited the book to those who have won at least three. And it’s interesting that those ten coaches have won over 40 championships in the 95-year history of the league.”

“Most of those coaches had a dominant decade: Guy Chamerberlain in the 1920s, Curly Lambeau in the 1930s, George Halas in the 1940s, Paul Brown in the 1950s, Lombardi in the 1960s, Chuck Noll in the 1970s, Bill Walsh in the 1980s and Bill Belichick in this century. I wouldn’t have realized that unless I had done the research. I hope the Bears will have a future coach like those pillars,” he said.

I found his realization to be poignant, especially because one of the pillars is still coaching. Looking at Bill Belichick, on ESPN earlier this week, I thought to myself "maybe he will break the trend. Maybe he will be known for success in not one but two decades (of this century)."

It is not, however, hard to argue that a young boy or girl who grows up the Bay Area, and has no immediate tie to Boston or New England should be a loyal Pats fan. However, every year, I have at least one student who is. They love being different. They love supporting a team a lot of people do not (locally). They love the spoils of victory and in this case, they love being an easy target. And what should any person with an easy target do? Hit it.

Meet Anthony: a senior in my Sports and Spirituality class. He has two younger brothers and plays on the golf team. Anthony is inordinately proud of his Italian heritage. When he found out that Serena Williams lost in the US Open semifinals to an Italian, Roberta Vinci and that her opponent in the finals was another Italian, Flavia Pennetta, he gave a huge fist pump. He may have said "Forza!" too.

Anthony cares about his classmates and his work; no doubt class is better because he is in it.  He is also is somewhat of an easy target because he is fun, he doesn't take himself too seriously AND he is a huge fan of the Pats. It is a piece of his identity that no one, not even his closest friends fully understands. 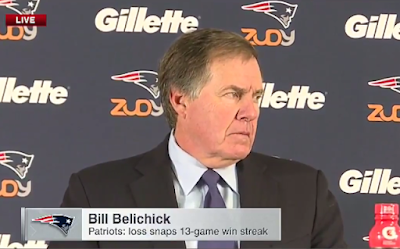 Wednesday morning before class, I noticed all of the television screens at the gym featured the Pats coach, Bill Belichick in a press conference. I wasn't able to hear the questions he was answering because the gym leaves the volume on low. All I could see on the ticker underneath his press conference were the words "Patriots 13 game winning streak comes to a close." Belichick, already serious and brooding didn't lighten up for one moment. Considering the asinine questions coaches often have to answer, I get why they don't often smile.

All of this was materializing into something I needed to throw at Anthony.

He walked into class as he always does, very respectfully and said "Good Morning." I looked at him and said with total sincerity, "Anthony, is Belichick going to lose his job? I saw a press conference at the gym this morning? Do you think he's getting fired?" I said it with enough disbelief, that he paused for a minute.

"What do you mean Ms. Stricherz?" he said.

"I don't know, it's just what I saw. I mean the Pats lost on Sunday...their win streak is over.

"Ms Stricherz, they lost in overtime! They won 13 straight games!!"

At this point I just started laughing. So did another student who was in on our exchange. I loved every minute of it.

At the end of class, Anthony said "You got me pretty good Ms. Stricherz." 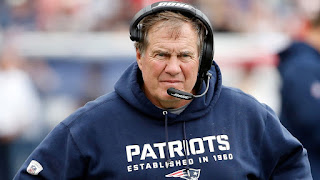 I told him "Anthony, I just learned about all of the coaches who have won three or more Superbowls. It's chronicled in a book. You might be interested in it (again my plight to get students to read). Your guy isn't done just yet. He won't be getting fired anytime soon."

Is it weird that my harmless practical joke put a huge smile on my face? No, because the only reason it was funny in the first place is because it verified for me that every once in a while I do what good teachers always do. They pay attention to their students—their interests, hopes and their needs. They also know them well enough to catch them off guard, which every teenager needs more than once in a while. And I can say with confidence, THAT is what teenagers love....that and for some kids at my school, the Pats.

Posted by Anne Stricherz at 9:49 PM