In response to our class viewing of the "30 for 30: You Don't Know Bo," one of my students said "Ms. Stricherz, someone should give you that poster of Bo Jackson for Christmas." I respond without hesitation, almost emphatically: I would love that!

I then tell them there was a time when that poster hung in every male college dorm room across America. My enthusiasm takes over.  (Students have seen this before). Within minutes, I can't wait to share how that image was recreated 20 years later when Jeff Samardzija played both wide receiver and pitcher at Notre Dame. I go out of my way to show it to them. How Ignatian! 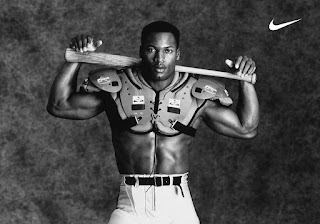 But, it seems I got a much better present for Christmas than a poster. The San Francisco Giants got a new right-handed pitcher, when Samardzija signed a 5-year contract.

At 6'5" the 31-year old right handed pitcher is a great athlete. So great, that he made SI.com’s list of the Top 15 Greatest College Athletes. It lists Jeff Samardzija ’07 (#14, football/baseball), Bob Golic ’79 (#12, football/wrestling) and Raghib Ismail ’94 (#9, football/track). Notre Dame was the only school to have three athletes on the greats list.This is the upside for Giants fans who are concerned about the cost of his contract. 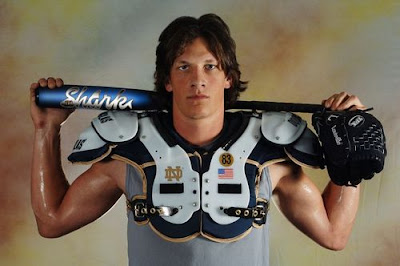 And if things don't work out with the G-men, everyone knows the Niners could use some help....or the Earthquakes or appropriately enough, even the San Jose Sharks. How's that?

In "A Man for All Seasons," Katie Stuhldreher writes,


Samardzija started playing soccer, basketball, and baseball at age five in his hometown of Valparaiso, Ind.

"I've been playing football my whole life. I started playing organized ball when I was seven, in a Pop Warner league. Other than that, I was playing in the yard and park with my brother," Samardzija says.

He continues, "Baseball was the same thing. In fall and winter I'd be playing football, in spring and summer it was baseball."

Samardzija's father, Sam, taught him to play ice hockey at a young age, too. Sam Samardzija played several years in a semi-pro hockey league in Chicago.At 12 years of age, Samardzija added wrestling to his list of activities, earning Indiana state runner-up in his weight class.

Samardzija participated in bookstore basketball, a campus-wide 5-on-5 outdoor tournament held each spring. Samardzija teamed up with former Irish football players Carlyle Holiday and D.J. Fitzpatrick to win a championship his freshman year.

I have written about Samardzija many times, in particular during Shark Week. A nickname that Giants fans will hope does well in the Bay. In Getting to Know Jeff Samardzija, we learn:

Scholl: Where did you get your nickname - Shark?
Samardzija: It all started my freshman year. I was new on the baseball team. I showed up, didn't know anyone. I was a talking to (former Irish pitcher Chris) Niesel, and out of nowhere they called me `Shark' because they said I looked like the shark on Finding Nemo. It started during a game while I was pitching and they yelled at me from the dugout. Then Coach (Paul) Mainieri picked it up and it just snowballed from there. I guess I look like a shark. 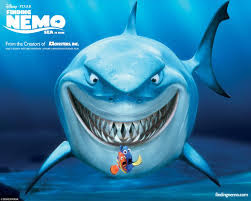 I can't tell you how many people have told me they are happy he has done well in MLB, but wish he were still playing football. Certain athletes are just a joy to watch. Their ability to catch, leap, run, cut is different than unbelievable (although sometimes that's true). It's fun. And if there's one thing San Francisco Giants fans know, it's going to be a fun season...after all, an even year and a new man who pulled down more touchdown passes than any other WR in ND history will be taking the mound.

I wonder if he still drives that white Saturn (thanks for the intel Skipper).

Posted by Anne Stricherz at 2:28 PM