I know there are big problems in the world today. We live in crazy, sad times. In Luke's Gospel, for the first Sunday in Advent, Jesus speaks to his disciples about times that feel like today. He says:


“There will be signs in the sun, the moon, and the stars, and on earth nations will be in dismay, perplexed by the roaring of the sea and the waves.People will die of fright in anticipation of what is coming upon the world, for the powers of the heavens will be shaken.

I hate to admit it, but I woke up on Sunday morning a little shaken. I found myself moping around the house. "Not ready to go back to work?" my mom asked. No...it was something else. It was the 38-36 loss of the Fightin' Irish of Notre Dame to the Stanford Cardinal.
I know that I saw (what most people consider) a great game Saturday night at Stanford Stadium. I am aware that a contest of that caliber is a win for college football, but I walked away with but one question on my mind: Why does losing hurt so badly?

We all know that losing provides great life lessons. Yes, it can be a great teacher. I know. But I'd like to cast that sentiment to the side. Let's get to the hurt. Let's stare at the wound. No scab just yet. The bandage is removed. This is what I've got so far....

1. When your team loses, you question who you are and what you are about.
When you win, you simply delight in the elation of victory. You ride a bit of an emotional high and overlook the mistakes and missed opportunities. When you lose, every single one of those takes on added weight.
In 2010, Coach Brian Kelly stated "you have to stop losing before you start winning." A loss like this one makes me pause and reconsider. I thought to myself, "Have we stopped losing?" I think the record, which was 10-1 going into the game answers that question. Why should 10-2 feel differently.

When you lose, your mind starts to play tricks on what could have been. It's just too easy to go there, and it's not a good place to be. 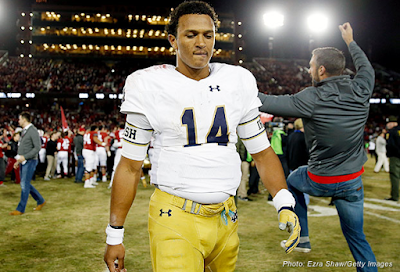 2. I despise the pity party.
I don't want to hear from the nominal fan of ND football or the distant co-worker—the one who rarely talks to me in general—about what they thought of the game. I don't want them to ask me if I was at the game. To one person I said "I live 2500 miles from South Bend and 25 from Palo Alto. Tell me why I would not be at the game." We could have covered that for the past six months leading up to it—believe me, I am more than willing to talk about that.

What helps the hurt is hearing from those folks who can offer constructive feedback. Less pity, more insight. For example, "ND would benefit with a stronger player at Tight End—like Kyle Rudolph or Tyler Eifert who are having great seasons!" or "the team really missed Kevare Russell, especially during that final play." I am hungry for conversations like these and not the sympathy. For you to tell me "I saw the ending. It was just so sad...so sad" is something different than salt in the wound. It simply keeps it exposed...and it makes me feel as though I can't get those two minutes of my life back. Strong? yes. This pity party does not need to include more than one person.

3. After a loss, I have had to remind myself that my ability (or instinct) to trust people is remarkably low.
I know many people hate ND; for these folks an Irish upset is tantamount to the Gift of the Magi. In general, I try to avoid these people. There are however those who are lukewarm toward Notre Dame and yet they love to see the Irish lose. I find myself trying to sniff these people out. Anyone without a football loyalty is suspicious. Again this is no way to live.
4. The Team
But losing hurts like this because of one thing: the team. My friend Mike '90 said "one of my favorite teams ever." I would have to agree; I feel as though I personally know these guys thanks to "A Season with Notre Dame Football." If you would have told me that we would have the injuries we did in August, I never would have said we would fight for a place in the college play-offs. But I want this year's squad, replete with all of those who emerged as contributors, to know they put the pep back in our rallies and the fight back into our song. In the past a loss like this hurt because we just were not contenders. Now we are, and we need to get the "W."

As a coach, I know there is no greater joy than working with a group that came together. One that beat the odds and one that embodies the best of a school community. I see that in the 2015 football team from the University of Notre Dame.

I carry with me hundreds of images from Saturday's upset. I saw senior captain Sheldon Day unable to move on the field after completed a 45 yard field goal to win the game with no time remaining. That hurts. He will be greatly missed next year. Which again reminds me that losing hurts. Losing players to injuries, to graduation, to academic integrity, to Florida State...it all hurts. But if I didn't care, it wouldn't hurt.

The care is huge. Thanks Irish for a great season. Can't wait for the Bowl Game. I mean that.