The Beauty of Bookstore Basketball 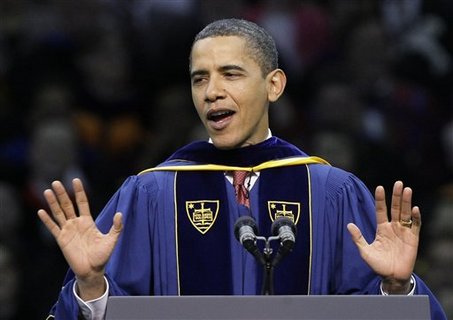 Many people have not forgotten or forgiven the University of Notre Dame for inviting President Obama as the 2009 commencement speaker. People held passionate, principled arguments from many standpoints for why the University should and should not host a leader who stands in violation of many, but not all Catholic teachings.  However, I am here to say--yes, four years later--what I have not forgotten or forgiven.

I have not forgotten that the President cut the tension his very presence brought to the podium by mentioning a great spring tradition: Bookstore Basketball.  Fears, disdain, and concerns were neutralized, even if slightly when he said

Now, since this is Notre Dame I think we should talk not only about your accomplishments in the classroom, but also in the competitive arena.  No, don’t worry, I’m not going to talk about that.  We all know about this university’s proud and storied football team, but I also hear that Notre Dame holds the largest outdoor 5-on-5 basketball tournament in the world -- Bookstore Basketball.

Now this excites me.  I want to congratulate the winners of this year’s tournament, a team by the name of "Hallelujah Holla Back." Congratulations.  Well done.  Though I have to say, I am personally disappointed that the "Barack O’Ballers" did not pull it out this year. So next year, if you need a 6’2" forward with a decent jumper, you know where I live. 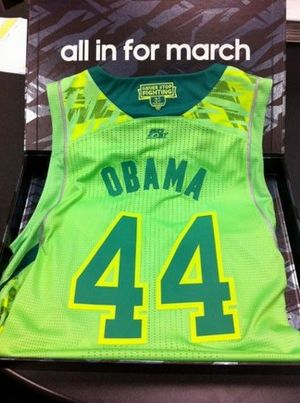 The President said these remarks three minutes into his address and it's a good thing he did.  When I heard him throw down two team names--one of my favorite components of Bookstore, I began to relax.  His attention to a great ND tradition allowed me to take a breath, knowing that the more controversial topics were on their way.  Mentioning Bookstore certainly made that a little more palatable; sports can and does build common ground--something that is needed so badly in America today.
Many students are reluctant to even apply to Notre Dame because it's in South Bend, IN a town of 101,000 in the northwest corner of the state.  It is 90 miles from Chicago, but may as well be 900; it feels so far away.

College students will never be distracted by the allure of the city of South Bend, but I contend this has been more of a blessing than a curse.  The best part of Notre Dame is the people. Their commitment to academics, athletics and faith are outstanding.  The student body works hard, but it plays hard too.  The 739 teams who play in this annual tourney is but one example.

And there's nothing quite like Bookstore; one need not be a huge basketball fan to appreciate this 40-year tradition.  As mentioned on the Bookstore Basketball webpage, "The tournament is ENTIRELY student-run.  It is played every March and April with breaks for Easter and Notre Dame's annual Blue/Gold football game.  The tournament is played rain, snow or shine (except during lightening)." The campus has courts tucked away between dorms, beside the lake and more.  It's as though for six weeks in the spring the bounce of a basketball becomes the heartbeat of campus. 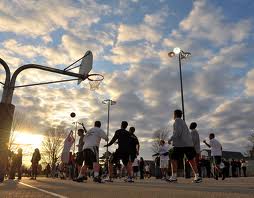 People ask me all the time What is there to do in the Spring at Notre Dame?  What's life like long after football season is over?  I think Bookstore is one of the better answers.

In his book "Take Time for Paradise: Americans and Their Games" the late A. Bartlett Giamatti captured a truth that describes Bookstore.  He said "I believe we have played games, and watched games, to imitate the gods, to become godlike in our worship of each other and, through those moments of transmutation, to know for an instant what the gods know.”

The gods are aware of the importance of leisure.  They know in games and competition that we learn as much about ourselves as one another.  They understand that the memories that are made when we test ourselves physically and mentally, when we pass and when we play are ones that remain in technicolor.  They are not black and white.  And these truths are why I have not forgiven myself for not taking the risk of lacing up my shoes, reigniting my one solid move--the pivot to shoot and joining my friends to play in the annual tourney.  No, I never played Bookstore and I regret it. 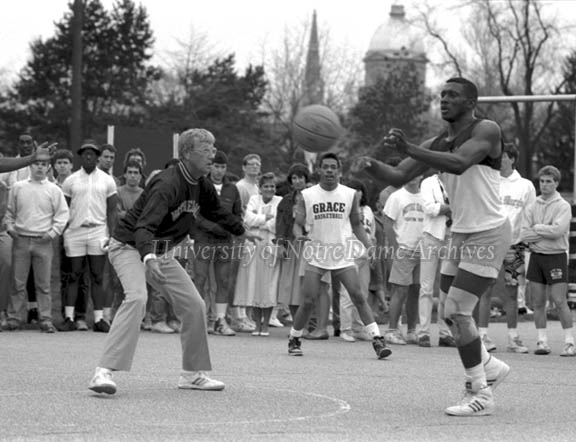 I am however grateful that I watched the many games I did.  I love that even a few years after I graduated I saw my good friends, then seminarians Lou DelFra and Sean McGraw join Tom Doyle, CSC on the Stephan Courts for a game (Round 16).  It was already a joyful day; Tom was ordained the day before.  I know the opposing team enjoyed calling the foul on "Father" Doyle as we delighted in hearing his new name.  And that's just one shining example of what makes Bookstore—and Notre Dame special.  Good move Mr. President for taking notice.  I haven't forgotten.

Posted by Anne Stricherz at 3:19 PM