Come and See: Heartbreak in Houston

In the first chapter of John, Nathanael asks Philip, "Can anything good come from Nazareth?"  Philip said to him, "Come and see." I felt the same wasy as I found out the only game in town during a recent trip to Houston were the Astros vs. the Texas Rangers. 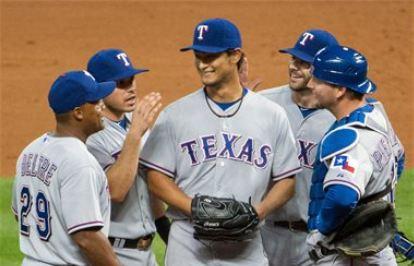 I was genuinely disappointed to find out those pesky Rockets were on the road in Sacramento.  I will have to see James Harden on GSW turf.  I have to admit, the thought of seeing the "Lastros" in a a pre-season interleague game, wasn't overly enticing.  I thought to myself, "I guess I will go." What kind of entertainment could a team with by far the lowest payroll in MLB offer?

My apathy might stem from the fact I hadn't had a chance to miss baseball all that much.  In addition to another World Series title (October baseball, a great problem to have) and the World Baseball Classic that came to AT&T Park, Giamaitti's poetry wasn't resounding with me.  Baseball hadn't broken my heart....it hadn't even been gone.

I couldn't have been more wrong about a single evening.  Every single one of my expectations was surpassed and I encountered joyful surprises.  I left the park that night with one thing to say: "Baseball, I love you." 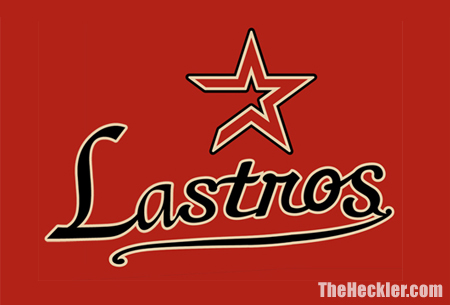 Not only was the game the second one in the regular season, the Astros weren't playing an interleague game.  As verified in my Sports Illustrated baseball preview, the Astros had moved to the AL West.  I was right about one thing--they are expected to place fifth out of five teams--living up to their name.

I walked into Minute Maid Park, excited to see another cathedral of baseball.  I was met by several fans who looked at me squarely in the eye and said "Go Giants." They said it with sincerity; wearing a World Series crown feels remarkable.  The respect and admiration the G-men are getting from baseball fans is legit.  It set the tone for a remarkable evening.

With its retractable roof, Minute Maid park didn't feel  like an indoor stadium (closed due to impending thunder storms). A far, far cry from the Astrodome (which I made it to in September 1997) this jewel of a yard has the unconventional if not quixotic center field. 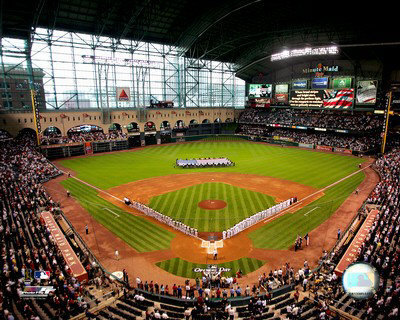 A friend made the claim that all baseball parks should maintain symmetry --a nice way of saying they should be the cookie-cutter stadiums of the '70s.  I couldn't believe his sentiment launched a debate, but it did.  I believe today's most intriguing ballparks integrate pre-existing urban architecture e.g. the wall at Camden Yards in Baltimore or a brick building that shapes left field at Petco Park in San Diego.  Why would we want every outfield to be the same? As we were talking, I was reminded how many times baseball has served as a backdrop to debates and thoughtful conversations I have had with family and friends.  It's slow pace interrupted by action and reaction allows for this to unfold--easily and organically. 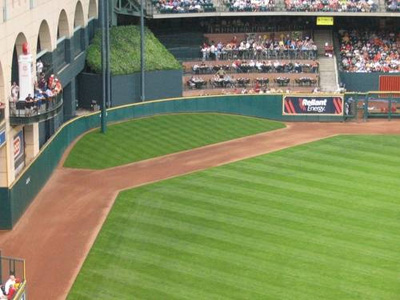 And what was unfolding before our eyes was incredible--a perfect game.  At the completion of five innings a new friend turned to me and said that the Rangers starting pitcher, Yu Darvish hadn't allowed a single player to first base.  I looked at the score board to confirm, and sure enough 15 batters had sat down at the Japanese pitcher's expense.

During the sixth and seventh innings, we quietly observed the masterpiece develop.  I wondered if others around us were aware of what we knew.  By the eighth inning, the buzz filled the air.  It was as though fans made the temperature rise in the indoor-it-feels-outdoor arena.  At the bottom of the ninth inning, the energy was electric.  It didn't matter that this perfect game was being thrown by the opposing team (although I hope Astros fans disagree), we were aware that history was in the making.  My friend Matt made note that Darvish was facing the last three hitters in the line-up.  Translation: these should be the easiest three outs.

The exciting tension mounted with each pitch.  Darvish, got the first two batters out with ease.  All fans were standing.  We couldn't believe we were a witness to history in the making.  Everyone felt as though the perfect game was for them.  Even though this feat was in the hands of one man, it was a truly communal experience.  And within seconds, Marwin Gonzalez hit a clean single up the middle.  It was a devastating; I couldn't believe how disappointed I felt.  For Yu!, for baseball fans and my own bragging rights. 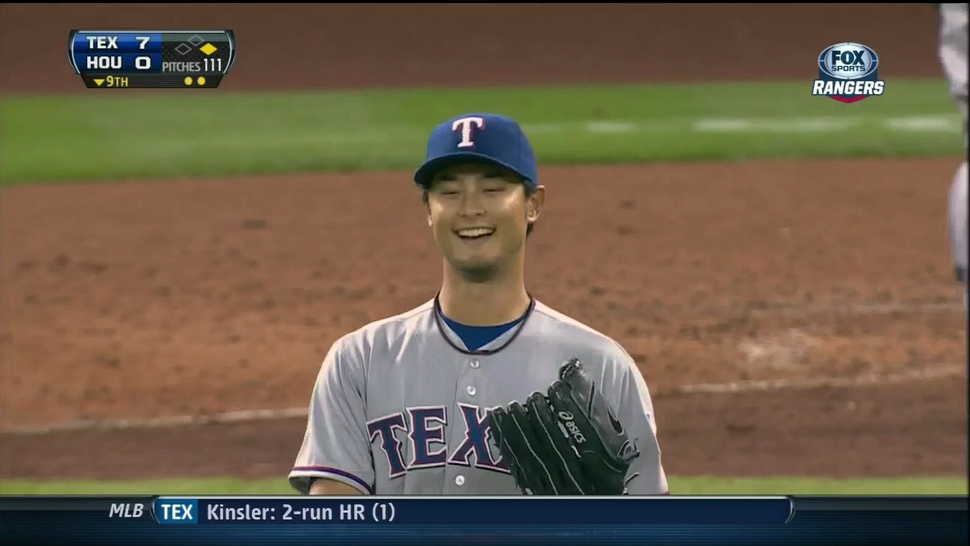 Yu Darvish, didn't throw a fit, he didn't toss hit mit in disgust or kick the dirt.  He didn't even stand on the mound and sigh. No, he smiled to himself.  What a feat and what an honor to witness his grace.

I'm glad I did as Philip recommended.  I came and saw.  Just when I think baseball can offer little more by way of surprise, I am proven wrong.  I walked out of Minute Maid Park feeling heartbreak, but with an increased appreciation for something I love. 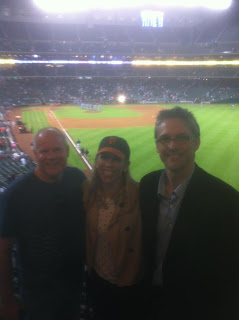 I recommned visiting other sports venues because a fan can be more objective about what their experience.  I never leave a rival venue without an important observation or lesson to learn.  In this Easter season, joy and surprise await us.  Get out there, be a witness and play ball!