You don't have to be a Notre Dame fan to understand that any basketball game that goes into 5 overtimes is special. Yes, the Irish defeated the Louisville Cardinals 104-101 in an epic duel that may have ended at 12:35 a.m. the following day, but has had many sports fans still talking. I am one of them. Here are my thoughts...one for each OT. 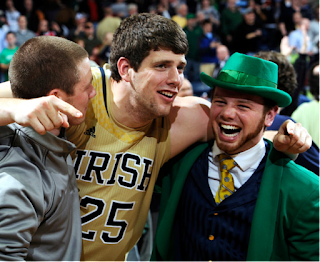 1.  28 Seconds of Jerian Grant: Many consider this to be the greatest clutch shooting display by one player ever. One Facebook posting said “This 12 points in 28 seconds by one guy is the stuff kids dream about and act out in their driveways and playgrounds. I’ve never seen it before.” And we might never see this again. It was just one of many components that made Saturday, February 9, 2013 an instant classic for Irish Hoops. 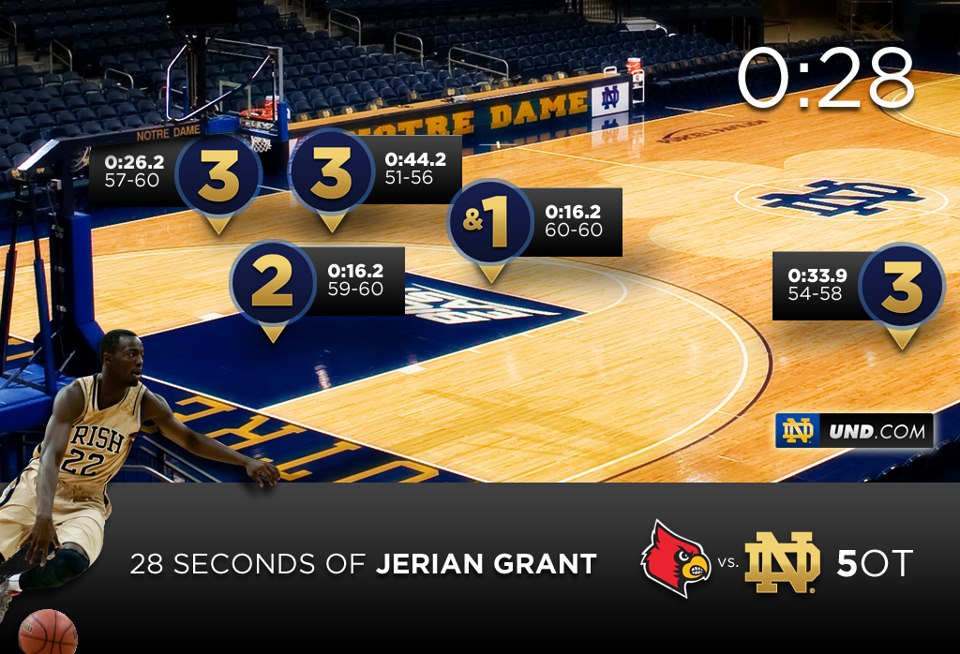 2. The Importance of Having Fun: In the article “March Madness” by Rev. Tino writes that “sports can teach us how to have fun. And the business of fun—of play, of laughter, of lightness—is important spiritual stuff. Just ask any of the resident clowns around here.” Every team has its resident clown, or should, but I also think it’s important to see leadership caught having fun. Enter Coach Mike Brey. Every single person who watched this game noticed how much fun he had coaching.

I never take having fun for granted and many don’t, but enjoying the moment can be a tremendous challenge with the pressure of winning or not losing—choose your poison. However, Brey acknowledged that fun was a reason for their success. “We got over 100 (points) because we played an extra game,” Brey said on ESPN after the game. “We were having fun. It was awesome.” 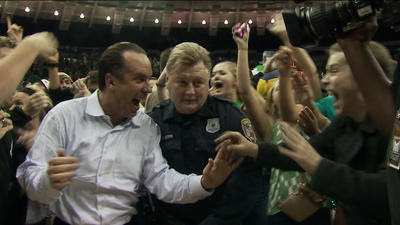 3. Free Manti: When last cited at Purcell Pavilion, Manti Te’o was on top of the world. What fan didn’t love seeing #5 sweep the floor at halftime or leading the charge as students swarmed the court in 64-50 rout over Kentucky. In just a few months’ time, our vision of him may have changed, but he hasn’t. Met with mixed reactions, he came to support the Irish standing tall and his head held high. He has exercised that endearing humility more than anyone could have ever predicted. He is the butt of many jokes. People question his character. And, Forbes magazine recognized Te’o as one of the most hated American athletes. He shares the same approval rating as Lance Armstrong—15%. My rally cry was and is FREE MANTI! Seeing him be who he is at a great game says even though the world can’t imagine it, he already is free.... 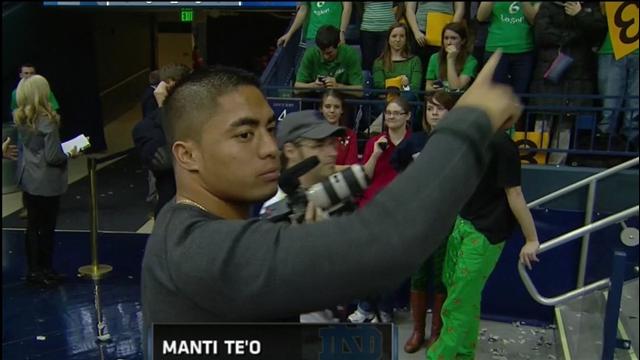 4. Never Miss a Free Throw: I grew up in a home that truly regards the foul shot as a “free throw.” “Free!” in our society is a good thing. We welcome free food, free drinks, free merchandise, etc. So why don’t we embrace the “free” throw. My dad watches players in the NBA miss free throws with an air of total disgust (and it happens often!). It’s almost a moral wrongdoing. Missing free throws affects the outcome of games. In this game, it didn’t determine the winner, but it could have. As noted by NCAAB.com “Both teams missed crucial free throws in the last minute. Atkins missed two with 37 seconds left and Montrezi Harrell did the same for Louisville with 24 seconds left. The lead changed hands 26 times and there were 16 ties.” A free throw made is a free point. Folks love to say “defense wins games.” It does, but so do free throws!

5. Why You Gotta Have a Deep Bench: I teach 7 of the 14 varsity basketball players at St. Ignatius, so this year I have paid much more attention to the role of every team member. Some of these boys are starters, others get subbed in frequently and others see no playing time. I know this is a reality in a sport that allows for 5 players on the court, yet I feel for the guys who suit up yet never get called into the game. I wonder how frustrating and disappointing it must be to “ride the pine” (and I hate that expression) or hear from your friends “good luck” knowing you won’t contribute. For those journeyman players, let Sherman Garrick serve as a shining example. 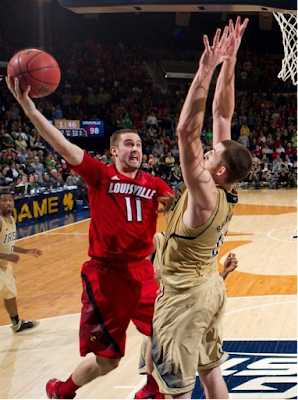 Dan Martin writes Garrick came “in for Big East Player of the Year candidate Jack Cooley, who fouled out with 6:54 left in regulation. It appeared the Irish would be in trouble without Cooley for the rest of regulation, not even knowing yet that there would eventually be 30 minutes of game to be played.”

In the ten Big East games prior to No. 25 Notre Dame’s five-overtime thriller against No. 11 Louisville, Garrick Sherman had only appeared in six and averaged two points in just over 10 minutes per game. Saturday night, though, he was just what the Irish needed. His 7-of-10 from the floor was the most efficient mark of any Notre Dame player on the night. He will admit he had the game of his life. Not a bad game, one to serve as that distinction.

Coach Brey said, “we played an extra game tonight.” When you’re having fun, have great fan support, and get substantial contributions from many players, why not play two....!?  Thank you Irish. Thank you, Coach Brey. An awesome memory....by the way, do freshmen know how good they have it?!