I thought it poignant that Manti Te'o story broke one day before the much anticipated Oprah Winfrey interview of Lance Armstrong.  If you had asked me at the beginning of the week to compare and contrast them, I would say as far as athletic heroes are concerned, they fall on totally opposite ends of the spectrum.  One's character is virtuous, inspiring and as good as I've ever seen; the other's is flawed and inauthentic.  At the end of the week, I still hold the same beliefs. 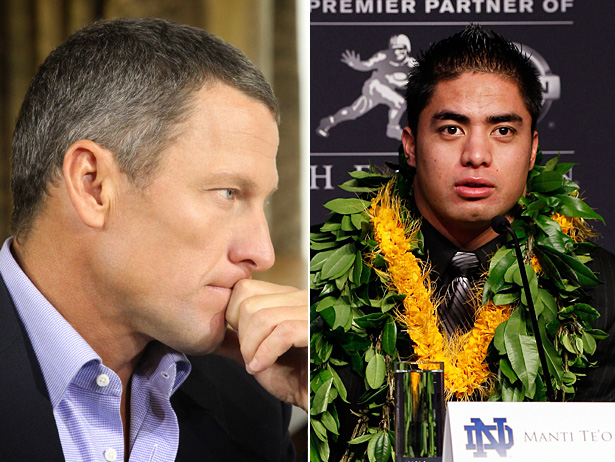 An hour into the interview, Oprah said to Lance "You and I both know that fame magnifies who you really are."  This truth is why I believe, and still believe Manti Te'o is a living legend, a hero.  For me, he is far from the anti-hero many deemed him to be.
Why is Manti a hero?  First, I wanted him to be a hero.  Putting my cards on the table, Notre Dame is core to who I am.  I love and am grateful for my alma mater in the way that I am for my Catholic faith and citizenship in this country.  I know their strengths and concede their weaknesses.  Each is far from perfect, but I believe they have done more good for the world and humanity than not.  When people tell me things like "I won't be rooting for the Irish because I can't stand Notre Dame," I feel wounded.  I think: Why couldn't you have said I’m not an ND fan?  Said remarks come with the territory and extend to those associated with it.  As a captain of the football team, Manti Te'o is as good as target as any. If my allegiance discredits my claims about his heroism, so be it.  My intent however is simply to relay a few examples of what fame has magnified.
Manti as Hero
I have read great things about Manti, that I have only prompted me to tell my students and friends. This one however beat all. 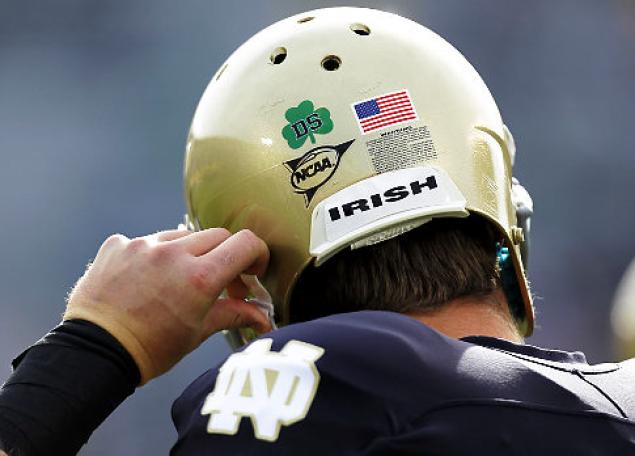 On Oct. 27, 2010, Declan Sullivan a 20 year-old junior died at a Notre Dame football practice, atop a 40-foot aerial lift that collapsed when winds gusted up to 53 miles an hour. A crowd watched the fall, heard the thud, went silent. Pure, utter tragedy.In Manti Te'o Notre Dame's 'special son' I came to learn "when tragedy struck the Notre Dame practice field, it was Manti who charged across the field and climbed over the wreckage? He went to Declan Sullivan and put his arm on him and whispered a prayer in his ear." That's what heroes do.
Manti has said great things about his experience at Notre Dame and in playing football. This one however, beat all.
In the Strong of Heart video series Manti's parents admit that they encouraged their son to turn pro before graduation. His father Brian Te'o said "He was torn between his idea of duty and loyalty to family versus what he truly wanted to do in his heart.  Every year he would say "Mom and Dad, the earliest chance I get, I'm going to get into the NFL and buy you a home." We would say Great! Good job son!  Thank you--just get your education. 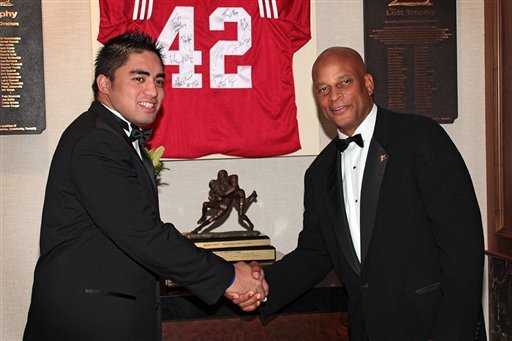 "Well the chance came.  We flew out to Newport Beach for the Lott awards to be with him and support him.  The night before the event we sat down as a family and we talked about his decision, and I said my recommendation was to leave.  If I was your age, in my circumstance  I would leave."
Offilia Te'o added, "We've always encouraged him to take advantage of opportunities that come before you and definitely on paper, the decision should have been for Manti to enter the draft."
When it was time for Manti to speak, he told the audience "I was talking to my sister one time and I asked her what I should do.  She said Manti isn't that your dream to go into the NFL?  Since that's your dream, you should leave.   And I thought about it. And you know what? The NFL is my goal.  My dream is to have the most impact on the most people as possible and I've found I can do that at Notre Dame so I'll be coming back my senior year."
I heard his words and thought to myself: Who says that?
Teaching teenagers for 13 years now, I know exactly who says that.  The young man or woman who says that is a gift.  They are heroic in their virtue. They make everyone around them better.  They are exceptionally rare--and yes, they are human....they have their moments!  But without a doubt, they are recognized for who they truly are.  Fame, tragedy, trials, victory and triumph don't change it--only magnifies it.
Looks like there's enough for Part III tomorrow.  It will include his human side....