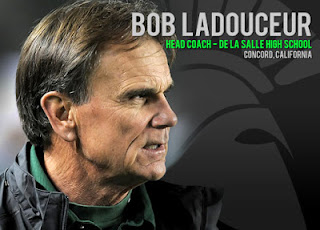 I arrived at the University of Notre Dame in the fall of 1992 sight unseen.  The first time I saw the Golden Dome was when I looked out of my dorm room window; the view from Farley Hall of Our Lady was exceptional. I traveled 2,000 miles from home, the first in my family to attend ND.  I must have had hundreds of expectations and preconceptions about all I would see, do and learn.  However, one thing took me by surprise--football players drank during season.

One of my two roommates, a volleyball player arrived on campus a month before I did for in-season training.  She quickly became friends with a number of football players.  I remember that first weekend they went to CJ's pub, an underage friendly bar.  I was shocked. 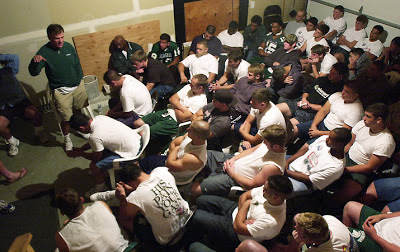 Sure, several players are of legal drinking age and the consumption of alcohol is a near collegiate past time, but let me provide some context.  I saw one loss during high school.  De La Salle lost to Pittsburgh in the Nor-Cal finals, my senior year ending a 4+ year winning streak (and a 151 game winning streak followed!).  I thought making choices and commitments to certain behaviors was indicative of all winning programs.  Call me naive;  I was.  But I also know what football players at De La Salle were committed to.  And that commitment and sacrifice fueled hard work and a strife for excellence.  That journey cannot be separated from Coach Bob Ladouceur, the winningest coach in California high school football who resigned from his position after 34 years on Friday, January 4.

Teaching and coaching high school athletes today, I stand in awe of what he created--a program of sheer excellence.  Everyone has asked how "Lad" did it.  I believe his essay "What is a Spartan" reveals how.


Now this may sound odd to you, but the reason we win and what beats at the heart of our neighborhood is love. Yes, we win because our players love each other. They are not afraid to say it or embrace each other as a sign of that affection. This is just an outward sign. To love someone, words are nice but insufficient - actions speak volumes. And that's not too easy. Put simply, love means I can count on you and you can count on me. This translates into being responsible. Responsibility is learned and not inherited. Being responsible to 45 teammates is not so simple. It means following team rules and knowing that my attitudes and actions have a profound effect on the success of the whole. We pride ourselves on that exact accountability. We recommit to each other on a weekly basis before games. We commit that my contributions to the team will be my best self. This commitment extends to all facets of my life. It's how I conduct myself as a person - from the classroom to the field, to the outside community. Wherever I go or whatever I do, I carry my team with me, knowing full well that I am connected to a group that loves, accepts and respects me. We try to make our football team a safe place to be. Safe to be ourself. There is nowhere to hide on a football field. Teammates know each other, coaches know the players, and the players know the coaches. All attempts at not being yourself fail miserably. The key is to be the best self you were created to be. We work hard at breaking down the walls that separate us called race, status, religion, jealousy, hate and culture - and truly experience each other on a purely human level.

There are voices much more knowledgeable and wise than mine to speak on behalf of Coach Ladouceur. There certainly isn't a shortage of media attention to his story (his story will be made into a movie)--and I'm glad there isn't.  His is a worthy, noble one. 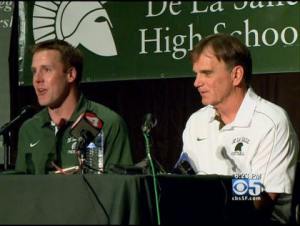 De La Salle held a press conference in the school theater for Coach Ladouceur share his decision and to announce his successor, Justin Alumbaugh.  Upon hearing the news, a colleague asked Isn't that a bit much?  Do you really need more than a press release?  My response to him was the words of Matthew 5:14-16

You are the light of the world.  A city set on a mountain cannot be hidden.  Nor do they light a lamp and then put it under a bushel basket; it is set on a lamp stand, where it gives light to all in the house. Just so, your light must shine before others, that they may see your good deeds and glorify your heavenly Father.

A man, a coach, a Christian like Coach Ladouceur has let that light shine before others--in his players, in his program and what he's given in the classroom and on the gridiron.  This is a life and legacy of 34 years in the making.  I know "Lad" is the last person to want such attention, the De La Salle high school community knows it must say "thank you" for such good deeds and ultimately letting glorifying God in the young men who become Spartans.