Manti Te'o: The Morality of Lying

I lied. I claimed that "Manti Te'o: Why I Care" would be the last reflection but here we go again.  I suppose this puts me in an ever growing camp of human beings that span the ages—from St. Peter to Pinocchio, or Benedict Arnold to Bernie Madoff.  If you find my actions unforgivable, stop reading here.  Otherwise, I would like to share a correlation between what I have taught the past ten years--morality and ethics and the crux of the problem most people still hold with Manti Te'o. He lied. 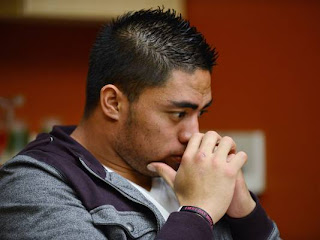 My friends have told me that I use "for example" in most of our conversations. Any idea or claim I make, I substantiate with something I have read, heard or learned to verify or analogize. They find this mildly entertaining.  I'm glad!  In turn, I often ask "Can you give me an example?" I hope they don't feel like they are in my class... but with ethics and morality, the world--everyday human life--is the classroom. So yet again, Manti Te'o serves as a good example.

The biggest issue most folks hold against Manti is the belief that when he found out on December 6, 2012 Lennay Kekua died, he didn't inform the public. He continued to use the tragedy of her death from cancer for self-promotion. This 21-year old football player was able to play in spite of his grief; in fact he channeled it in on the field and off of it. 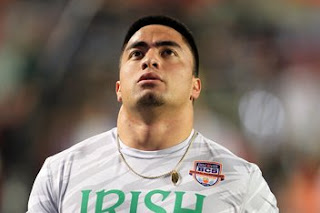 Katie Couric went after Manti for this as we knew she would.  She showed the video clip of Manti speaking after the Heisman trophy award ceremony and said "your repeated the story that your girlfriend had in fact died of cancer.  Let's listen..."

Manti: I don't like Cancer at all.  I lost both my grandparent and my girlfriend to it.

Katie: That's a lie, why did you say that?

Katie: C'mon. This person calls and says it's Lennay. (With a very strong tone of voice) You stuck to the script. You know something was amiss Manti. Why?

Manti:  Put yourself in my situation. My whole world told me that she died on September 12th. Everyone knew that; this girl I committed myself to died. Now I get a phone call on December 6 from her and I'm going to be put on national TVand asked the same question--what would you do?
Katie: I think on December 6 or December 7, I would have gone to my coaches or someone and said "this situation is so messed up." I would have said "I have been the victim of a cruel prank. This person is changing her story, she's messing with me. It's not holding up. It's not right--we've got to get to the bottom of this right now. That's what I would have done."

Manti: That's not what I did.

It is very easy for anyone, especially Katie Couric to say what they would have done in any challenging, awkward situation, especially after it has passed.  But I want to pause right here to consider the morality of this situation. 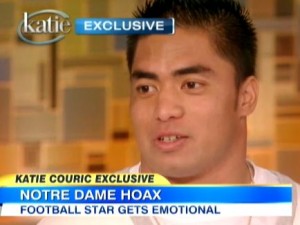 A key component of what makes an issue a moral one is freedom.

Moral Issues involve questions of right and wrong, or good and evil.  What ought I to do or what should I not do are questions associated with moral issues, and necessitate a reflection upon situation (what choices are available, how much freedom does the person have), principles (values, moral rules or duties) and intention (what is the motive or intention).  If a person is not free, a moral issue is not present for that person.  If a person has a motive of exemplary quality, but does something morally questionable as a result, this does not remove moral culpability.  And even if someone follows what morality might say one ought to do, but does so with questionable motive, this raises the question of what is right or wrong.  Thus, moral issues always involve free, principled action with intention for what is right or good.

If an individual is not free to make a choice, it diminishes his/her culpability and the morality of the issue.  If there is a gun pointed to your head, and you are asked a question you are not free to not answer it.  People rally against this with the belief we are always free!  It's not that simplistic.  Furthermore, societal factors can prohibit freedom. For example, most people would agree that being a member of a gang is bad.  After spending time at Dolores Mission parish in Boyle Heights (East LA), I confronted a real question--How free is a young man or woman not to be in a gang. Again, you may say they are always free not to be in one—that is true. But the reality is different. 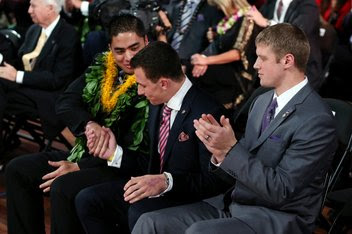 Manti was not free to tell the truth on December 7 or 8 for that matter. You may disagree with me, but as he requested, I will put myself in his situation. Had I received that phone call, I would have had to do a whole lot of fact-finding, reflection, inquiry and more. To believe that this was possible while he was in New York City awaiting the decision of the Heisman trophy is unrealistic. His time in Manhattan was characterized by a number of ceremonies and meetings with various athletic celebrities. He was conducting interviews in response to six national awards he already won. Getting the information I need while feeling totally lost and confused, let alone wondering if not hoping a person I cared about is really alive—that's no small task.

What people are seeking from Manti at this point is the virtue of honesty. The expectation is that a man of his character could and should have exercised honesty, especially when he was interviewed rather than continue to tell a lie. But virtues like honesty always work in concert (or harmony) with others and must be used in moderation.

For example, I say to my students--you pick up your date for prom. She walks down the stairs and you can't stand her dress. It is an ugly color and it doesn't fit right. Do you honestly tell her how she looks?

In this instance, you may default to another virtue like kindness rather than honesty and say "I'm so happy to see you tonight." They get it.

For Manti to reveal to the public that he had been duped or explain that a woman he had been exclusively involved with from April 26-September 12 (we are talking about a 4-month relationship people) was now alive would not have been prudent.  To take away from the actual winner of the Heisman with his weird and unbelievable story would not have been wise. He could speak in the way he did with integrity--which was his defense. Their deaths to cancer were real to me, Katie. 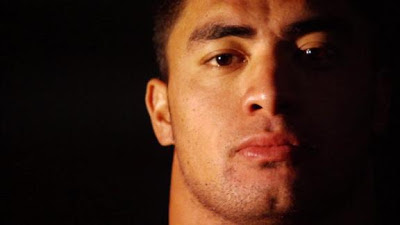 Virtue works in moderation. Therefore, it can be difficult to know how to exercise one.  For example, if you are so completely generous with your money, you may never have any savings.  Determining what is a good percentage to give and to who is both generous and wise.   Again, they work in harmony.

For Manti to be totally honest about what he was hearing from the resurrected Lennay is unrealistic.  He was probably putting the pieces together.  He had to figure out what was really going on and where he went wrong.

Manti admitted that he got caught up in being an inspiration to people.  His ego got in the way.  And yet, his fault is consistent with his dream--to affect as many people as he can (in a good way).  Whether he knows it or not, I believe he is still serving as a moral example--the need for freedom and how to exercise virtue.  If you think I'm making excuses for what he did or consider me a relativist, so be it.  But the moral life, the virtuous one is a challenge. It always invites reflection and compassion.  My biggest fault against Katie Couric is her lack of it.  My biggest fault against Manti is he showed too much.  Again, the need for moderation....Can you give me another example?!