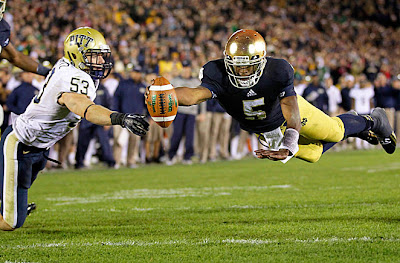 The road to a 9-0 season has been colored by four words—Luck of the Irish. The Notre Dame vs. Pittsburgh game on Saturday, November 3 was no exception. The Fightin’ Irish overcame a 14 point deficit as they entered the fourth quarter to tie the game. Three overtimes later, the scoreboard confirmed a win, 29-26.  As the Irish prepared to respond to a field goal that put Pitt ahead by 3 points, I wanted to tell the team two simple things:

Keep Moving Forward
In 2008, my application was accepted to run the Dipsea Race.  According to the race’s official website, “First run in 1905, the Dipsea is the oldest trail race in America. The scenic 7.4-mile course from Mill Valley to Stinson Beach is considered to be one of the most beautiful courses in the world. The stairs and steep trails make it a grueling and treacherous race.”

On race day, the only advice my colleague, a former cross-country coach, and competitive runner gave me was to “keep moving forward.” It seemed like no advice whatsoever—that’s what a runner in a race naturally does.  But the challenges of Dipsea--the three flights of stairs as tall as a fifty-story building, the plunge down into Muir Woods across Redwood Creek, the tough grind up through the trees over trails named "Dynamite" and "Cardiac" and the discouragingly steep climb up "Insult Hill" close to the finish taught me his advice isn’t something to take for granted. 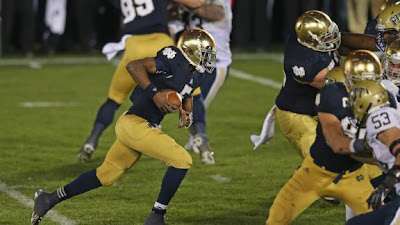 Those three words resonate with the game of football.  In the final overtime, the Irish needed to get the ball into the end zone.  Keep moving forward! First and ten yards….keep moving forward. Second and seven….third and three.  Touchdown!!!

In life, it can be difficult to keep moving forward. Sometimes, we are stuck in the past; moving forward is too hard.  Moving forward may bring change or new challenges, but it’s necessary.  We are called to build the Kingdom here and now. So many of our brothers and sisters are in need. Natural disasters, personal loss, illness, and injury run their course.  When they do, keep moving forward. One step at a time.

Total Ball Security
I had the good fortune of touring the Maria P. DeBartolo Center, the office, and training facility of the San Francisco Forty-Niners (when Mike Singletary was head coach).  In the theater where the team reviews game tape hangs a sign that reminds players to focus on five fundamentals.  The one that stood out to me was “Total Ball Security.”  This task isn’t as basic as “keep moving forward” but it’s certainly just as important. Cierre Wood fumbled the ball at the goal line. The final call was reviewed to determine that Golson even had possession. 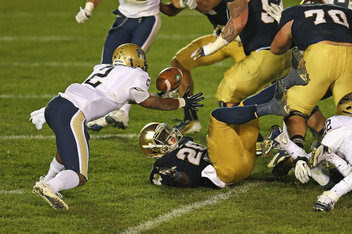 In life there are but a few, precious gifts or responsibilities that demand “total ball security.” For me, it’s a reminder to hold on to what you value—your word, dignity, your heart. The longer I live, I have learned not just how to maintain total ball security but why it’s important. My heart helps me to love God, others and myself. My word reveals who I am; I never want my word to lose value. It’s fundamental to the relationships I value most. And dignity, although inherent is what I believe society is all too often seeking to compromise.

The next time you watch a close game, take a moment to think about what you might tell the team.  I wonder what life lessons it might provide.

Posted by Anne Stricherz at 9:06 PM