Thankful for our Veterans: Sources of Inspiration

Who do you look to when you need inspiration?
How might you cope with PTSD?

I hope you never have to answer one of these two questions.  And I’m sure Clemson’s oldest football player, a 24 year-old walk-on football player, Daniel Rodriguez, never thought he would serve as an answer for both. 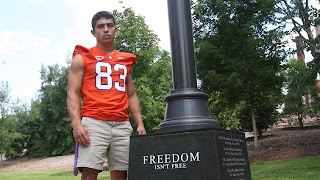 I came across Rodriguez’s story thanks to a friend who wished to share it on Veteran’s Day.  ESPN’s Daniel Rodriguez: Promise to Play reveals the sacrifices that men and women who serve in the armed forces make.  I am grateful we honor them on the same day of the same month every year.  In a small way, that attribute signifies but an inkling of the honor and dignity our Veterans deserve.

On one account, Daniel’s story is not unique.  He enters conflict and confronts the enemy.  He lives and yet he dies.  His resurrection however is a source of inspiration and it is one that his teammates now share.  It is found in a promise he made to a friend; a promise that involves his passion—football.

On Oct. 3, 2009, Rodriguez was deployed in Nuristan Province, in the far northeastern corner of Afghanistan along the Pakistan border. He was a sergeant and had experienced a year of fighting in Iraq. About 50 United States and Afghan soldiers manned Combat Outpost Keating, a forward operating base near the remote town of Kamdesh.

Keating, surrounded by towering mountains, was in a place that “just bred terrorists,” Rodriguez said. Just after dawn, while Rodriguez was checking a computer, a coordinated attack, involving at least 175 enemy gunmen and perhaps twice that number, was mounted.

Shortly before, Rodriguez had promised his close friend, Pfc. Kevin Thompson, that if he made it home, he would chase his dream of playing college football. When the battle began, Thompson was killed almost instantly, one of eight Americans to die in a day of intense fighting. Rodriguez was wounded in his leg, neck and shoulder.

When Rodriguez completed his mission, he returned home with a Purple Heart, a Bronze Star and the psychological effects of war, which amounted to Post-Traumatic Stress Disorder.  In the video he says, “I couldn’t sleep at night.  I was waking at night in a sweat.  Sleeping on the couch with firearms under my pillows. I couldn’t live.  I was basically drunk for the first two months I was home. My leveling point was when I went to Arlington National Cemetery and then my life doesn’t seem so difficult."

"I have to live my life with a desire to do better."  Wise words.

Rodriguez regained his purpose by remembering his promise—the promise he made to Thompson. Rodriguez committed to getting back in shape, pushed on by his pledge and a friend who used creativity and inspiration to further that dream.  His friend, Stephan Batt teamed with his cousin who said, "If you trust me to shoot and edit as a short fil, rather than as a standard recruiting video, it'll have a better chance of catching the notice of coaches."  “

Fortunately, Clemson coach Dabo Swiney took notice.  Taken by his work ethic, his drive to chase a dream and the fact that he wasn’t asking for a scholarship, but rather for a chance to fulfill a promise--Coach Swiney offered him a spot as a preferred walk-on. 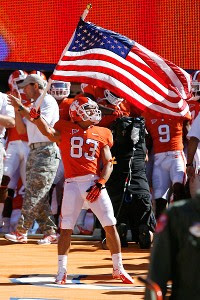 In addition to the 85 players who are guaranteed a spot on the team roster, the NCAA allows for up to 20 additional players, known as walk-ons.  It’s hard for me to imagine working out, practicing and suiting up next to a person who had “suited up” in combat.  It’s hard for me to imagine what I might learn about teamwork, dedication, selflessness, and integrity from a teammate who had to implement these virtues to stay alive.  It’s hard for me imagine what carrying a flag on the football field might be like for a teammate who gave of his life to defend all that it stands for.

But the story of Daniel Rodriguez is one that could be entitled: The promise kept; the dream realized. And it inspires all of us to remember how our promises have power; our dreams can bring us out of darkness.

November is a month to give thanks—for saints and souls for freedom and those that defend it.  Although Veteran’s Day was over a week ago, in the spirit of Thanksgiving, it’s never too late to extend gratitude to men and women who give their lives in service of our country.  Thank you Daniel Rodriguez, Kevin Thompson and thousands of other men and women as well as your families back home for your promises and your dreams.