Rory McIlroy Lives Up to His Name: Red King

Rory McIlroy approached the 18th green at the 2012 PGA Championship knowing a win would put his ranking back at number one in the world.  He also knew that his margin of victory was contending with a 22-year-old record set Jack Nicklaus. He turned to his caddie J.P. Fitzgerald and said, "I'm going to win this one by eight, as well."  He did so by sinking a 25-foot birdie putt.  However, does he know what earning his second major title revealed about him?  Rory McIlroy lives up to his name. 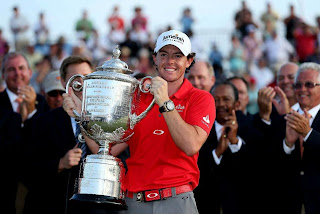 When golf analyst David Feherty said, “the name Rory in Gaelic (or Irish) means red king” I almost couldn’t believe what I heard.  I looked at the television screen and saw a 23-year old red headed golfer wearing a bright red polo shirt.  Sportswriters commented ad nausea that the champion wearing the red shirt wasn’t Tiger Woods.   I can’t understand how they have missed what I saw.  Golf has a new king. 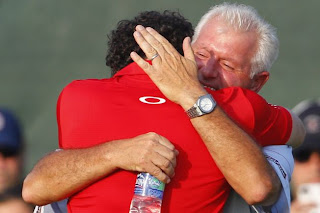 McIlroy is now ahead of the majors pace of Woods. McIlroy turned 23 three months ago; Woods won his second major, the 1999 PGA at Medinah, when he was 23 years, 7 months old. All speculation aside for what is or is not to be, on Sunday I caught in a glimpse into the human reality that sometimes, we really do live up to our name.

Names are tremendously personal; they are not insignificant.  We are not numbers.  Isaiah 43:1 says I have called you by name and you are mine.  Our first name is one of the first gifts we receive from our parents.  They can reflect our heritage or honor a family member.  Others may stem from of one’s faith tradition. For example, many Catholics use names inspired by holy men and women—the Saints.

One of my favorite movies “The Shawshank Redemption” reveals that the dignity of the human person is inextricably linked to the fact we have a name. The first night new prisoners, including Andy Dufresne arrive, the veteran inmates bet on who will “crack” first. After hours of taunting and heckling, one inmate can no longer take it.  He wails and screams, begging to go home.  The guards remove him and beat him so badly he dies.  The next day at breakfast, the men have plenty to talk about.  Instead of mocking the victim, Andy inquires “What was his name?” Another inmate, Heywood replies, “What did you say?” Andy says “I was just wondering if anybody knew his name.” Indeed we are known by our name.  We are remembered by it too.

The name Adam means “first man” and the angel Gabriel declared that the virgin Mary would give birth to a son. “He will be called Emmanuel, which means “God is with us.”  These are but two names that are as fitting the one I learned about as golf history was made at “Glory’s Last Shot” by the red king, Rory McIlroy.