Notre Dame unveiled the uniforms its football team will wear on October 6, 2012 in the Shamrock Series game against the University of Miami.  The reaction from Irish fans, simply put, is outrage.  I too love the classic, traditional navy and gold, but let’s remember people: this is not a moral issue. 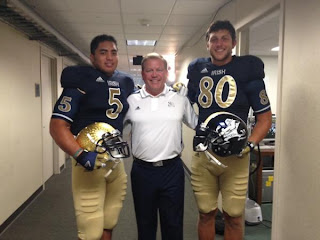 Moral Issues involve questions of right and wrong, life and death or good and evil.  What ought I to do or what should I not do are questions associated with moral issues, and necessitate a reflection upon situation (what choices are available, how much freedom does the person have), principles (values, moral rules or duties) and intention (what is the motive or intention).

What Notre Dame athletes wear on game day is a matter of preference.  Preference is akin to taste.  Other non-moral issues include Should I name my dog Farley or Zahm?  (Answer: depends on its gender). Should I make this sandwich with chunky or creamy peanut butter.  (Answer: chunky.  No contest)

I ask Notre Dame faithful to save your moral outrage for issues like world hunger or more specifically hunger here in the US.  Since working with students at the Food Bank of South New Jersey for but a few days, I have yet to view food in the same way.   I have been blessed with a food secure home my entire life.  I have never once wondered where my next meal will come from (unless I forgot it).  The reality is different for too many Americans. 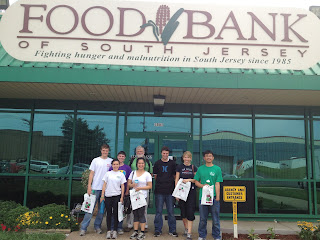 Or in the realm of Sports and Spirituality, please save your indignation for matters like the number of high school athletic programs that have been cut due to budgetary deficits.  If you are not convinced this qualifies as a moral decision, Michael Wilbon wrote a provocative piece about the relationship between diminished high school programs and the LA Riots.

For those who do perceive the change in uniform to be a moral issue, perhaps some information will assuage your anger.  Former Notre Dame quarterback Frank Allocco spoke with my seniors last spring about “Lofty Dreams and Buried Blessings.” We met for lunch before and discussed coaching, athletes today, Notre Dame and more (Frank is the head basketball coach at De La Salle High School in Concord CA). 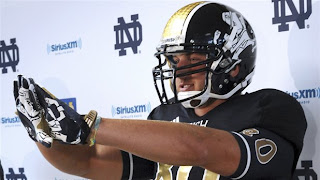 He sits on an advisory committee with Nike and has learned that one component of Oregon’s recent success—believe it or not—is attributed to their flashy uniforms.   One reason today’s athlete becomes interested in certain schools and choose them over others is because of the uniforms.  It sounds crazy I know, but it is also important to understand that today’s athlete IS different. These young men and women want style.  The zanier—e.g. the University of Maryland’s uniforms feature their vibrant state flag—the better.  With first hand knowledge of this reality in mind, Frank told me that Notre Dame should consider doing away with the traditional, preppy uniform and update its look.

Does a uniform translate to victory?  Maybe not, but it certainly doesn’t hurt in terms of recruiting! And I hate to say it, but for many Irish fans, winning and losing is a matter of right or wrong. 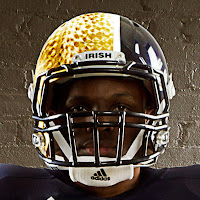 It is always difficult to change tradition. Tradition is revered because it is tradition.  Notre Dame has unveiled other uniforms before; on special occasions or big games the Irish have dawned the “wearin’ o’ the green.”  And we’ve had opinions about that as well.  The tradition rests in the colors—navy and gold for Our Lady, green for the Fightin’ Irish and excellence for Notre Dame.  In all that we do and what we wear our motto remains: Onward to Victory!

Posted by Anne Stricherz at 4:54 PM