In less than 48 hours, a video detailing wartime atrocities in Africa was viewed more than 23 million times. The purpose of “Kony 2012” a 30-minute clip that went viral on Youtube is to pressure world leaders to arrest Joseph Kony, war criminal and leader of the Lord’s Resistance Army.
KONY 2012 is one of the many efforts by Invisible Children in their campaign to bring Joseph Kony to justice. Invisible Children has been working for 9 years to end Africa’s longest-running armed conflict. Their website claims that “KONY 2012 aims to make Joseph Kony famous, not to celebrate him, but to raise support for his arrest and set a precedent for international justice. In this case, notoriety translates to public support. If people know about the crimes that Kony has been committing for 26 years, they will unite to stop him.”

No one could have anticipated the success of KONY 2012.  A poll suggested that more than half of young adult Americans heard about Kony 2012 in the days following the video's release.  On April 5, 2012, Invisible Children released a follow-up video, titled Kony 2012: Part II – Beyond Famous.  It addressed the criticisms that the first film met and was both praised and criticized in its efforts.

Not that I am on their advisory council, but a timely next step for Invisible Children might be to join efforts with the filmmakers of “The Lost Boys of Sudan” to tell the story of one man who carried the US flag in the opening ceremony of the 2008 Olympics—track and field athlete Lopez Lomong.

Lomong who will run in the 5,000-meter race in London 2012, came to the United States as a war refugee after escaping war-torn Sudan.  He is a Lost Boy of Sudan. A Catholic, he was abducted at age six while attending Catholic Mass and assumed dead by his family for 15 years.  His legs and feet saved his life as he escaped by running for 3 days and 3 nights from captivity to Kenya. 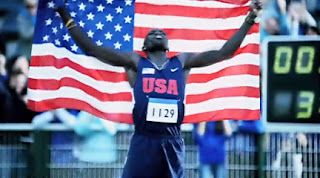 In the article "I Came All The Way Here, So I Have to Run" Tom Farrey writes: "The U.S. government was offering visas to resettle about 3,800 of the displaced boys in 38 states. Unsure whether his parents were even alive anymore, Lomong wrote an essay in 2001 describing his life story and desire to come to America. The immigration gatekeepers were sold, and at age 16, he was placed on an airplane, a first for him, headed for Cairo, then another bound for Beijing, another headed to John F. Kennedy Airport, and finally a commuter jet set for Syracuse, N.Y. Greeting him at the gate, just six weeks before the Sept. 11 terrorist attacks, were his new foster parents, Robert and Barbara Rogers, who had learned of the resettlement program through their Catholic church."  He became a U.S. citizen in 2007.  Because of his patriotism he was nominated to carry the flag in 2008 in Bejing.

I am so proud that a great man, a great athlete is represented our country.  To me, his presence exemplifies what is best about our country.  We offer safety and freedom, opportunity and resources. I know this is not true for all people who enter our borders, but it is an ideal we strive for. I look forward to hearing more about the life of Mariel Zagunis who is carrying the flag this year.

So why should Invisible Children tell the story of a Lost Boy of Sudan?  Lomong was not taken by the LRA; he did not experience the wrath of Kony.  And yet the underlying causes of the conflict in Sudan and Uganda are the same—corrupt leadership, dire poverty, depletion of resources, and a lack of respect for human rights, human dignity.  The affects of both conflicts are more similar than different.  People are displaced, families are torn apart, young people are forced to take arms and renounce any freedom. 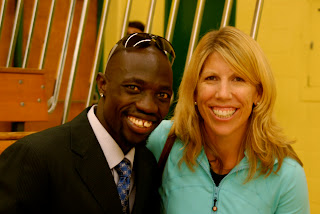 A popular mantra is “Justice begins with awareness.”  Invisible Children’s efforts spoke to the immediacy and power of social media—it brings awareness.  But I also believe we are wondering where awareness can take us.   Maybe it’s to bring a tyrannical leader to justice, maybe it will be to inspire a nation.  From Kony to Lomong, we have humanity at its best and its worst.  We see what a spirit is able to inflict and endure, insist and overcome.  I will look at Lopez Lomong and know that what we put on display for all the world to see is the one who truly triumphs.

Posted by Anne Stricherz at 6:33 PM