I had no idea the changes in the tradition of the Mass would give me pause to think of another tradition I hope will change—the words of the Notre Dame Fight Song. 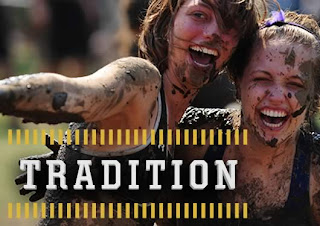 Last week I started to believe that after seven months of reciting the new responses in Catholic mass, I had it.  The changes to the Roman Missal stopped feeling so “new.”  However, a few days later at a small daily mass, I heard my own mistake loud and clear.  As the congregation replied, “it is right and just,” I kept talking: “it is right to give Him thanks and praise.”  I was humbly reminded that change is difficult.  But, it can also be valuable and at times, is necessary.

Tradition can remain tradition with change. The Notre Dame faithful may resist my proposed change and may fumble a few times after its implementation, but I believe it too is valuable and necessary.

The new Roman Missal implemented in Advent 2011, served as the perfect opportunity to discuss “Tradition and tradition” with my students.  Perhaps they rolled their eyes as I made another nod to grammar and semantics.  We make distinctions between Catholic and catholic, Saints and saints.  Was yet another upper and lowercase nuance a worthy Catholic tradition?  Was I making something out of nothing?

The definition of tradition in the glossary of “Catholicism” is “Both the process of “handing on” the faith and that which has been handed on.  Tradition (uppercase) includes Scripture, the essential doctrines of the Church, the Eucharist and the other sacraments, and so forth.  Tradition (lowecase) includes changeable customs, institutions, teachings and practices.”

Tradition, also known as Sacred Tradition remains constant.  And, in a secular context, we think of tradition in much the same way.  Tradition is an act, ritual or custom that is passed on from one generation to the next.  It is often respected and appreciated.  It must be explained, practice and taught.  To learn about tradition with the lowercase “t” may seem a bit schizophrenic.  If it’s changeable, then it is tradition?

Once again the Roman Missal served as a worthy example to explain this concept.  Msgr. Anthony Sherman, executive director at USCCB Secretariat of Divine Worship says “It is the book that provides us with prayer text. It serves as a point of unity that keeps us all together, presenting the prayers that are used around the world, in many languages, during universal feasts or holy days.” 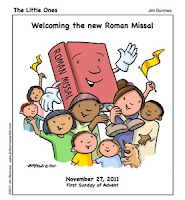 In 2002, John Paul II issued a re-examination of the missal.  It was inspired by the fact that the Church now had the lived experience of praying the “new Mass” for 25 years.  “This also provided an occasion to add new prayers, especially where the same oration was used more than once, and to make minor corrections or improvements in many of the prayers. Finally, prayers for the saints added to the calendar since 1975 could be incorporated into the Roman Missal (Catholic San Francisco)”

The changes made may have been just a word or a phrase, but they are not insignificant.  I now stop to think of the new response I am called to give.  On the other hand, the Mass did not change.  And the overall spirit of liturgy as a celebration of the Eucharist remains.  Tradition was in concert with tradition.

I was largely pleased with the product. I understand why we made the changes.  Some are even beautiful.  But the one area that I cannot reconcile is the absence of inclusive language.  Most notably, during the Nicene Creed, we say: “For us men and for our salvation He came down from heaven.”

I believe the Church had perfect opportunity to say “yes” to language that is not limited.  Our response could have been modified to “For us, and for our salvation.”  Or even “for humanity and its salvation. “ In the 25 years that the Church has lived with the experience of the “new Mass” we have only heard more requests for the inclusion of women, be it on the altar or in other leadership roles.  I wish that a change featuring inclusive language became part of our tradition. 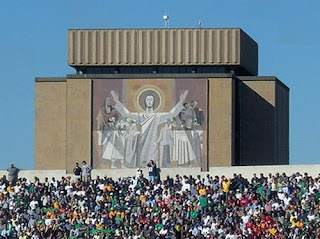 And if there is one place that knows and celebrates tradition, it is my alma mater, the University of Notre Dame.  We are united by traditions distinct to each dorm, by traditions that shape football weekends, others that characterize graduation—a last visit to the Grotto and even traditions to carry as an alum—wearing of plaid pants and more.

I received a letter from the alumni director Dolly Duffy calling attention to the fact that we are now celebrating 40 years of coeducation at Notre Dame.

Duffy, the first female director wrote, “The University is asking women how they would like to celebrate the anniversary.”  My request is clear—please change the fight song to be inclusive of who the student body has been for the past 40 years. 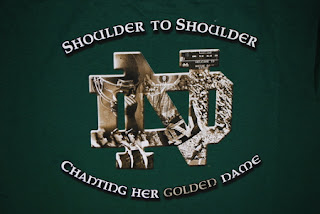 I remember as a student in Farley Hall discussing with several of my friends that the Fight Song should feature inclusive language.  In fact, at every football game, this group made a point of changing the words from “While her loyal sons go marching onward to victory” to “While her sons and daughters go marching….”  The syllables fit. It sounded great. It wasn’t overly contrived.

Over 15 years later, I was reminded that the words have not changed when I saw “The Shirt: 2010.”  The back reads “Rally Sons of Notre Dame.”  A friend turned to me and asked "Why doesn’t it say sons and daughters?”  I didn’t know.  We guessed that because it’s a football shirt, the language is fitting.  My heart of hearts believed otherwise. 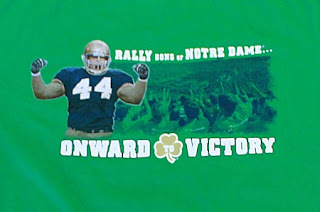 Duffy concluded her message noted “we have been blessed by the talents and contributions of amazing women. Father Ted Hesburgh’s experiment has definitely succeeded.”  I hope with the lived experience of 40 years of women at Notre Dame that another experiment launches—a move toward inclusive language at Notre Dame and in the Church.