What Jeremy Lin Truly Reveals Behind the "Secret" Handshake

Do you have a favorite passage of Scripture? How many do you know by heart? For a long time I must confess, my answer to both of these questions was “no” and "none." However, it might not be a stretch to say there is one passage that most Catholics know. Why? You see it every weekend in football stands across America. In fact, I saw it this past Sunday in the bleachers of the Georgetown vs. NC State Game.

John 3:16 For God so loved the world that he gave his one and only Son, that whoever believes in him shall not perish but have eternal life. 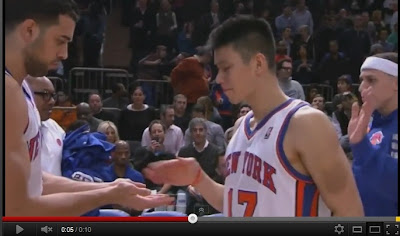 In “What Does It Mean to Be Catholic?” Jim Heft states “You may have heard it said that Catholics don’t read the Bible. It’s true that for many years Catholics didn’t emphasize reading Scripture. The Second Vatican Council stressed the importance of these inspired writings…“

While this may be true for Catholic Christians it’s certainly not a fact for all Christians. I hope the example of any devout Christian who really knows Scripture and the Word itself draw us to it. One person who has done that is of no surprise, New York Knicks basketball player, Jeremy Lin. However, how he has done that might be.

In the YouTube clip “Jeremy Lin and Landry Fields "Secret" Handshake" the two teammates explain why they do what they do. I would not have guessed that one step includes Lin reading the Bible. I’m not surprised, but all finger points to "the Big Man Upstairs" aside, I would be hard pressed to believe an orchestrated move like this has ever included that gesture before. 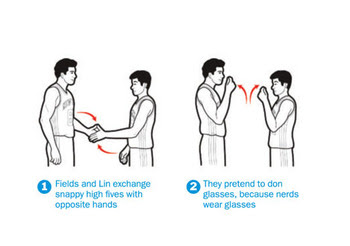 In the video, Lin says he tries to find a different verse everyday. The article Exclusive: Jeremy Lin says faith in God triggered 'Lin-sanity' affirms he is true to his word and to the Word. Marcus Thompson writes, "He started every morning with a devotional before heading to the gym to work out. Whenever the anxiety tried to creep in, he whispered a Bible verse to himself: And we know that in all things, God works for the good of those who love Him, who have been called according to his purpose. — Romans 8:28"

Who knew Harvard’s Lin and Stanford’s Landry “secret” handshake could have such a positive impact. In learning the story behind it, not only are viewers exposed to another beautiful passage from “the Good Book” at the end, but many are inspired by their example. My student, Elise wrote “I love this! Their relationship is so cool: they can joke around with each other, but still be serious in their faith in God.”

I hope you will consider identifying a passage of Scripture that you love. Memorize it. Consult a friend or look to someone you admire to discover what theirs is. The Chinchilla is optional!