"Well the change was made uptown and the Bigman joined the band...." –Tenth Avenue Freezeout, Bruce Springsteen 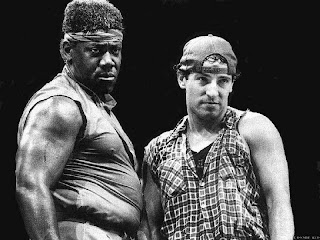 At SI we made our own change; I will teach a senior elective “Sports & Spirituality: We Are All Witnesses” in the 2011-2012 school year. The entire course is rooted in analogy—a literary device that draws a comparison between two things, typically on the basis of their structure and for the purpose of explanation or clarification. Believe it or not, it is also a principle of Catholic Spirituality. This gives me creative license to lead my students in thinking differently about the Catholic faith.

Analogy seeks to illuminate similarity in difference. It is a Catholic principle because a fundamental principle of Catholic spirituality is “sacramentality,” or as St. Ignatius would say, God can be found in all things. God is not an either/or proposition; it’s not human or divine, black or white, yes or no. With a Catholic worldview, God is “both/and.”

I believe that if you know what spirituality is, you can draw the analogy between it and anything you are passionate about, anything that lifts the human spirit, that calls attention to beauty—to aching pain and delicious hope. One area that I could easily pursue and many already have is Spirituality and Rock ‘n’ Roll.

In that light, I woke up this morning to read Clarence Clemons, the beloved saxophone player in the E Street band suffered a stroke. I have taken notice that E Street is getting older; with every tour I have wondered how much longer they can do it. “The Big Man” is the oldest member, and the biggest one—both in size and in personality. And his words about the “Workin’ on a Dream” tour prove just that.

"With all that pain and agony I went through on the last tour — I'd do it again. There's something about being on stage. I call it the Healing Floor. I do all this shit up there and then I think back later and say, 'How the hell did I do that?' But it's what I'm supposed to do. It revives me." via Peter Ames Carlin 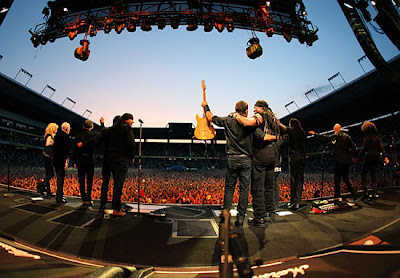 His insight made me reflect on what in my own life has been tremendously challenging or difficult—but totally worth it. And of course “the Big Man” would refer to the stage as “the healing floor,” for his spirituality is imminent. As I read that description I asked myself—what is my “healing floor?” For many years it has been pounding the pavement as I log in the miles. I wondered how many athletes see the court or the field as their “healing floor?” How many do not? And it IS what he’s supposed to do. There’s something we’re all supposed to do that will revive us. That’s where our spirituality can be revealed—in our own lived experience.