Teardrops on the City: Remembering The Big Man--A Musician & Athlete

Not many rock bands have a sax player; and none of them had someone quite like the Big Man. He was a whole lot of things—aficionado at the saxophone, vocals, and percussion. His charismatic presence on stage was the only one to rival the Boss man’s. He transcended race, class and ideals. To Springsteen, “He was my great friend, my partner and with Clarence at my side, my band and I were able to tell a story far deeper than those simply contained in our music.” He was a lover and a fighter, a husband to several women, a fisherman and unbeknownst to me until this week—he was an athlete.

Spirituality of rock ‘n’ roll can and should claim Clemons as its own. If it hadn’t been for a car accident that blew out his knee, "sports and spirituality" might tell his tale. Brian Williams reported, “in person and on stage he was as big as a house. Big enough to play college football at Maryland” but on his way to try out for the Cleveland Browns, a serious car accident effectively ended any career plans as a lineman. 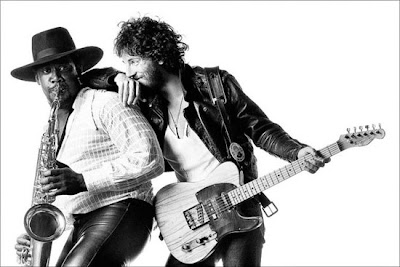 Interestingly enough, Clemons attended Maryland State College on music and football scholarships. And these two domains—music and sports should never be at odds with one another, though they often are.

As fans, it’s easy to add fuel to fire, particularly when comparing and contrasting the two on the professional level, as Monica Hamilton of East Syracuse did in her May 22, 2000, Sports Illustrated “Letter to the Editor.” She wrote: A few months ago I attended a Heat game in Miami. The ticket cost $37. Recently, I attended a Bruce Springsteen concert in Hartford. That ticket cost me $37.50. Who performed for 180 minutes without so much as a 30-second timeout (Answer: The Boss). Who drank at least three gallons of Gatorade and sponged himself off eight times while giving his fans their money’s worth? (The Boss.) Who has the best “big man” who plays a mean sax and could probably dunk a basketball (The Boss). I only have one question: Mr. Springsteen, how can I purchase season tickets to you?

Hamilton’s analogy works. Springsteen and the E Street band were masters of the live performance. Patti Scialfa said that during the 1984 “Born in the USA” tour, “the band was 189 for 189.” And I thought baseball players had a demanding schedule. But what’s hard for me to reconcile is that the Big Man was always at the heart of this line-up. 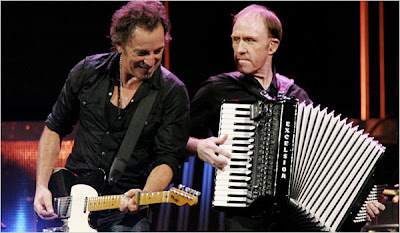 When Danny Federici died in 2008, I began to confront the mortality of my favorite group of musicians. “4th of July, Asbury Park (Sandy)” remains one of my top five favorite songs, but the band does not play it in the same way since the organist, "Phantom Dan" died too early, of melanoma. 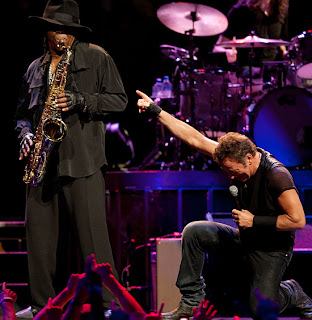 Truly, I love every member of the E Street band. (It sickens me that they are not in the Rock ‘n’ Roll Hall of Fame). I can tell you their hometown and all the instruments they play. They each have a special place on the stage and in my heart, but the Big Man has left a bigger hole in both.

As my co-worker and friend John said “I didn’t expect to shed tears…but I did.” John, you’re not the only one…Teardrops are all over the city as we recognize Clarence Clemons, all 6’5” an 275 plus pounds of him. He may have been "the Big Man" on the field and on the stage, but the legacy he left is even bigger.

As Bruce said: I want to thank you Big Man. I love you so much.