This year's Thanksgiving already feels different. While there is the lifting of COVID restrictions, Americans are paying a steeper price for the family feast. Yes, American football will be played at many a turkey toss-up, and for the first time in eight years, U.S. fans have a rooting interest in the World Cup. 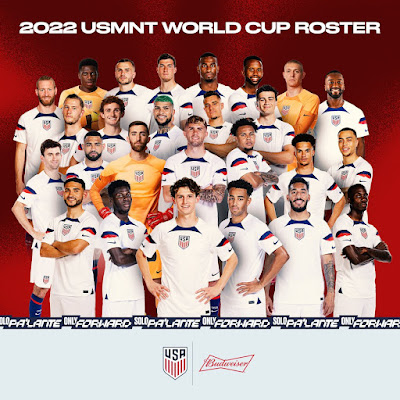 While US women's national soccer team have acquired a bunch of hardware since 2014 and in that time, the men's squad has transformed itself. It's a first World Cup for 25 of the 26 players who'll suit up in stars and stripes. In fact, the U.S. is tied with Ecuador as the second youngest teams in Qatar.

In Special Series: The FIFA World Cup 2022, Tom Goldman's article, The 2022 World Cup in Qatar begins, warts and all addresses the question many of us have been asking: How might we embrace this wildly popular event? Should we? Thank you, NPR.

In its first match, the U.S. faced a team that has been absent for 64 years. One that reminded the world with a 1-1 tie, that "we're still here!" The Welsh national soccer team is led by captain Gareth Bale and the head coach Rob Page.Thus, the purpose of this post is to share a living, breathing reminder of just how and and why it's hard not to embrace the World Cup (and full disclosure, I'm not a big soccer/football fan).

In case you have not heard for yourself or heard about it, Michael Sheen took it upon himself to remind sports fans, soccer enthusiasts and the people of Wales what might be possible.

I first heard the Welsh actor resound his barbaric yawp while driving to work and listening to my morning sports talk radio show. Murph and Mac, the cohosts played what I have posted here. Both men sat silent. No one knew exactly how to respond. What just happened? What did we just hear?

I could feel the synapses flying in my brain as I began a personal inventory of any prior knowledge I might have to all things Wales. Capital city is Cardiff. Their language is unique—lots of LONG words. Tom Jones is a native son. So it Catherine Zeta-Jones. Maybe the poet Dylan Thomas too. Yes?

I felt as though I just heard a Shakespearean performance, a passionate plea that the British bard could have scripted over 400 years ago! 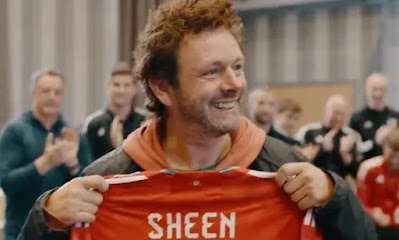 As written by Hollywood Insider.

If Wales performs miracles at the upcoming soccer World Cup, then Michael Sheen may have played his own small part.

The Welsh actor has gone viral on social media for the second time in as many weeks for his rousing pre-tournament pep talks for the Wales men’s national soccer team as they enter final preparations for the 2022 World Cup in Qatar.

In his speech, Sheen offers images and story. He references color and specific emotions. He reminds his countrymen who they are and from whence they came. It's spiritual.

The line that stands out among the rest for me his call: "Feel the breath.... on the back of your necks." The word spirituality comes from the Latin spiritus which means breath.  Where we feel the spirit, how we feel the spirit is worth paying attention to. Thank you, Michael Sheen for the opportunity to do that.Shakespeare and soccer fans everywhere get it.