Although he was speaking about The Masters, PGA professional Charl Schwartzel revealed a truth that all sports fans can understand. The South African golfer said, "the minute I start to drive away from the clubhouse and down Magnolia Lane, I start to look forward to next year's tourney."  Whether it's "One Shining Moment"—the highlight reel shown after the March Madness nets are down, the final out of the World Series or at the closing ceremonies of the Olympic Games, the joy of victory and celebration is coupled with a certain sadness. Good things do come to an end. And yet Schwartzel reminds us to stay positive. I appreciate his optimism. We have next year, the next one, and the next season. So here's to what is to be in 2023, and seven points to remember from 2022. 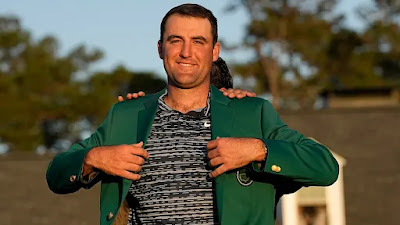 1. How do you not love a man named Scottie?!
Growing up, lots of boys go by Danny, Johnny, and Joey. As they get older, it's natural to drop the "ie" or "y." Those who don't, must have some sort of personality to pull it off....and I love it.

Men my age named Scott, must have endured some social trials with the popularity of "Scotty Doesn't Know." Not sure that would matter to Scheffler. After he missed his second putt on the the 18th hole, the crowd yelled "Scottie! Scottie!" I found myself joining in. Just a small reason to get behind the first time major champion! 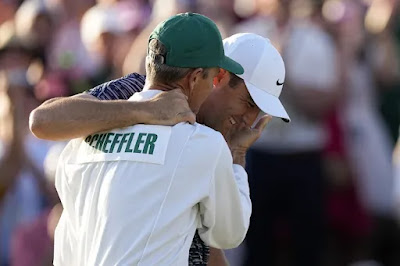 2. One secret to Scottie's success
Teddy. And how do you not love a man who goes by Teddy?!

Ted Scott, knows winning at Augusta National. Having served as Bubba Watson's caddy for 15 years, he stood in the winner's circle 10 years ago when Watson won his first of two Masters' championship titles.

Scott is not only well known, he's interesting—as reported in Who's Scottie Scheffler's caddie? 9 things you might not know about Ted Scott. Of particular import are the questions he had for the number one player in the world before deciding to work for him. Golf Digest reports,

“Teddy and Scottie talked for quite awhile before they went to work for him,” Tesori says. “Scottie’s young and has had a bit of a habit of getting a little angry on the golf course, and maybe even a little angry toward his caddie.

“Ted being a veteran, almost 50 years old, being out here for so long, he was able to say: ‘I want to come work for you, but you have got to promise me that you’re going to work on these areas.’ And not only did Scottie say yes, he has absolutely done it.”

No where was this more telling that how Scheffler and Scott handled the situation on the 18th hole on Saturday. #teamwork! 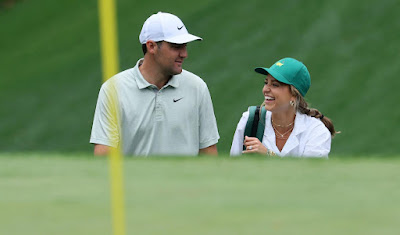 3. The other secret to his success
Although he slept well on Saturday night, Scheffler admitted that Sunday morning at the Masters was far from easy. He suffered a panic attack and could not stop crying.

However, he was able to regain his composure and remain balanced with a little help from his wife, Meredith, and his faith in Jesus Christ.

In an interview after the round, he added, "You know, you don't expect things to come to you in this life. You just do the best that you can and with the hand you're dealt and just go from there." In other words, Scottie understands that "all is grace—a free gift from God." Sounds like a perspective that leads to success. 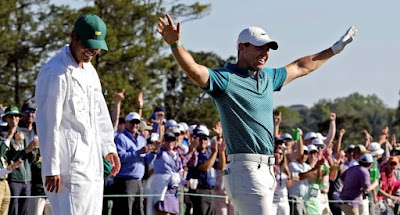 4. It's electric
With Scheffler carrying a 3-stroke lead into the final 18 holes, many people doubted that this Sunday at the Masters could live up to its hype. However, the magic of this major is not to be underestimated.

Look no further than Rory McIlroy who tied the record for the low round with a 64 on Sunday. As written on The Comeback,

McIlroy was on fire all day. He came to the final hole at seven-under. But after hitting his tee shot into a fairway bunker, his approach shot landed in the greenside bunker, leaving a tough up and down for par. Well, it would be tough for most golfers. For McIlroy, the up and down was a non-issue. He just got down, making a birdie to send himself — and the patrons around him — into a frenzy.

But electricity was in the air. Just minutes later, his playing partner Collin Morikawa did the same thing. Double your pleasure, double your fun. 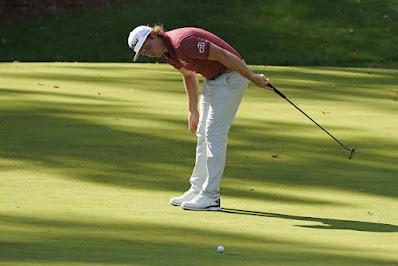 5. Birdie to Bogey
A friend and I could no longer take the asinine commentary from a man sitting near us at the clubhouse bar. He was loud and offensive, inappropriate and inaccurate. It took everything in me to not answer one of his questions.

Cameron Smith, who finished tied for third in the tourney missed a putt for birdie on the 10th hole. This man yelled at Smith "How do you miss that?!" He then belittled the Aussie who was 7 under at that time.

I find it shocking when sports fans criticize players and coaches. I believe some questions that fans ask are ludicrous.

I don't know that this man has ever played a championship course. I am not sure that he's been in a contest where he is three strokes down and partnered with the leader. I doubt that Smith would ask that question of another player at Augusta.

I play the Lake Course at Olympic Club about once a month. It humbles me in a way that goes far beyond what golf regularly does. And that humility starts on the green. I have putted for birdie and posted a bogey.

Golf is a cruel game. Cruel fans are not necessary.

6. Tiger Woods Must Be Irish
Given the amount of air time Tiger Woods gets you might not know that 90 other men are in contention for the green jacket. This is a fact that rubs many true golf friends raw. I understand. And still, the media can't get enough of him.

But remember, Tiger is just one more example of why I prefer non-fiction to fiction. We cannot make up what he does, what he accomplishes and what he gets away with.  Truly he has the luck of the Irish—or at least lives by a proverb of the Irish people! See blogpost for more! 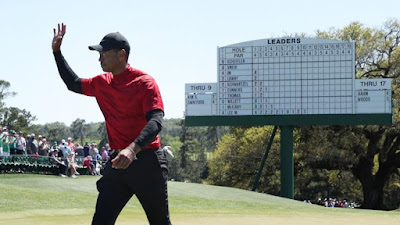 7. Sunday Best
As a sports and spirituality enthusiast, today is a special day. It's both Sunday at the Masters and Palm Sunday.

I arrived at Church to find the congregation gathered outside so we could process in with our palm branches. The Gospel reading recalls the Passion and several lectors play specific roles. Each one was dressed up, including the narrator in a handsome suit and tie. I looked at each of them are was reminded of what we used to call "our Sunday best." I have wondered if young people today understand what "church clothes" means. If they need a definition, I found one.

And yet, looking at Tiger Woods a few hours later, I found what might be a helpful analog. Dressed in his iconic red shirt and black pants, Woods looks his best on Sundays, too. Ryan Bellangee writes

“I've worn red ever since my college days basically, or junior golf days – big events on the last day,” Woods said. “I just stuck with it and it worked. I just happened to choose a school that actually was red, and we wore red on our final day of events. So it worked out.”

The "uniform" is striking and maybe superstitious, but it conveys a similar message. Our attire can honor something beyond ourselves. Sundays really are big days. 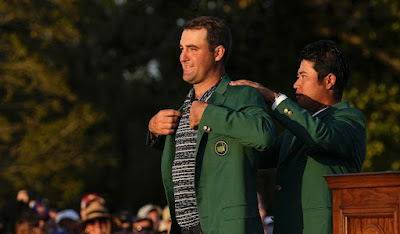 Conclusion
I've noticed that a number of people who know me reached out to me this past week. Many were anxious to talk Masters traditions and picks, share stories and imagine what it would be like to be there. I have come to realize, a simple question—checking in with others as it relates to their passions—is an act of love.

I used to wonder why people would ask me if I was going to "x" game or if I was planning on watching "y" contest. And now, I simply appreciate the chance to share a little bit of what I love and hope that they might begin to love it, too.

Golf isn't for everyone. The traditions and rituals of The Masters prompted some thoughtful class discussions, some of which are not easy. And still, this is such a special time of year. Indeed hope springs eternal. I hope Schwartzel enjoyed that ride down Magnolia Lane, filled with gratitude and hope for next year. I can't wait.

Posted by Anne Stricherz at 9:38 PM

Email ThisBlogThis!Share to TwitterShare to FacebookShare to Pinterest
Labels: The Masters