The Freeman Era: Principles and More

In case the advent of a pandemic hasn't convinced you that life can change in the blink of an eye, look no further than Notre Dame Football. On December 14, 2020 Irish fans lamented the loss of their Defensive Coordinator, Clark Lea, when he was named head coach at his alma mater, Vanderbilt University. As written in Notre Dame Football: Top 3 candidates to replace Clark Lea as defensive coordinator, "the Irish would be wise to pursue Cincinnati defensive coordinator Marcus Freeman. Freeman has been one of the fastest risers in the country and is regarded as one of the brightest young football minds in college football." Less than a year later, Freeman, 35, was named as the 32nd head coach in program history. 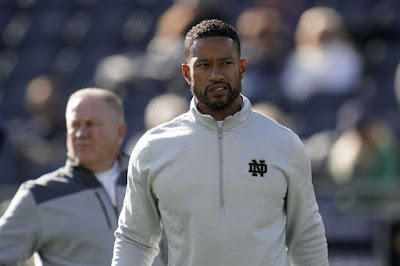 The purpose of this post is not to comment on Coach Kelly, his contributions over 12 years time, the culture he established, or the way he left (I still can't believe less than 48 hours after seeing him coach at Stanford, he signed with LSU....see opening line for point made!) but instead to celebrate what we—those of us who love Notre Dame football—are about to enter into. And, whether or not you are a fan of the Irish, I would like to point the way toward what and who I believe is a "Force for Good."

There has been so much excitement around the hiring of Marcus Freeman that I was dying to know if the Alumni Association would find a way to feature him in Sacred Spaces of Notre Dame: A Daily Advent Journey. As mentioned in The Best Way to Pray during Advent: Can you name a sacred place? this is a beautiful, creative resource for prayer. I was hopeful. I sensed his willingness to share his faith. And to my utter delight, on December 20, I came to learn that the sacred space for Coach Freeman is the God, Country and Notre Dame door at the east entrance of the Basilica of the Sacred Heart.

He said, “When I arrived at Notre Dame a little less than a year ago, this was one place that I was able to connect with immediately. Stepping anywhere near the Basilica brings me to a place of peace, but this door in particular is one spot that speaks to me. Each of these words — God, Country, Notre Dame — hold a special place in my heart, and when I pass through this door, I am immediately grateful for all of the blessings they represent that have brought me to this University.” 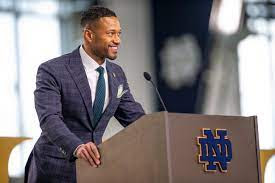 Coach Freeman's testimony was not surprising to me. From "The Freeman Era," I gained a sense of his values and character. One of my favorite scenes features University President, Rev John Jenkins, C.S.C. talking to him, via Zoom from Rome. I love Jenkins' question. He asked, "What attracted you to coaching? Why do coach? What do you like it?  How did you come into it?" To me, it's a worthy one from one school leader to another.

Freeman admitted that he wanted to play in the NFL for a long time. "All of a sudden you realize you can't do it and so you say hey I want to get into coaching. That's cool, that's fun. You get to be on the sidelines and around the game, but quickly I realized that is not where you get your satisfaction. You get that through helping young people to reach goals. It's about making time to make sure these young people do everything in their power to reach their goals. What drives me to to coach?  It's about serving. I plan on leading this team with an unwavering standard. We will call it the golden standard:

In the "10 Building Blocks of Catholic Social Teaching" William Byron writes "Principles, once internalized, lead to something. They prompt activity, impel motion, direct choices. A principled person always has a place to stand, knows where he or she is coming from and likely to end up. Principles always lead the person who possesses them somewhere, for some purpose, to do something, or choose not to." 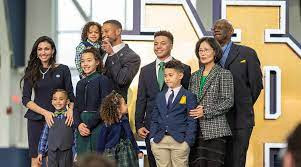 I always give my head coach the benefit of the doubt until proven otherwise. In Coach Freeman, I find a principled person...a man of principle. If it's not God, Country, Notre Dame, it's the golden standard.

At the conclusion of Freeman's Sacred Space reflection, he says. "So in this season of Advent, as we come together to celebrate Christ’s birth, think of your places of belonging. How do they allow for reflection, humility and gratitude, serving as reminders of where you’ve been and what you’re striving toward?"

Grateful to share a place of belonging. Grateful to celebrate the birth of Christ. And that some changes, though quick and unexpected are life giving. Welcome Coach Freeman and family. Merry Christmas!