On September 23, 2009, I walked into Room 202, a classroom I shared with my beloved colleague Michael Shaughnessy—"Shag." I came in with way too much energy and enthusiasm than one should on a Wednesday morning.

"Today is the Boss' birthday!" I said.

Looking at me with moderate disbelief, Shag had to have been wondering why such news was that exciting to me.

I chuckled, thinking to myself of his boundless energy. I said "yeah, he acts that way a lot doesn't he?"

Shag looked at me again, mouth agape. Then it clicked. "Oh....the Boss....The Boss! Bruce Springsteen! I thought you meant our boss, Patrick Ruff. A case for context!" Typical Shag—on point and ready to connect to our curriculum.

Both men share a birthday. Shag always called Patrick—principal at Saint Ignatius College Prep— "boss." To me, there's only one Boss. But this post isn't about context and it's not really about a boss either. That's because though he was technically my boss, I can only describe Robert Walsh, SJ as priest and pastor. He died of cancer yesterday at the age of 70. I would like to offer but two examples of the impact he had as well... a ministerial boss. 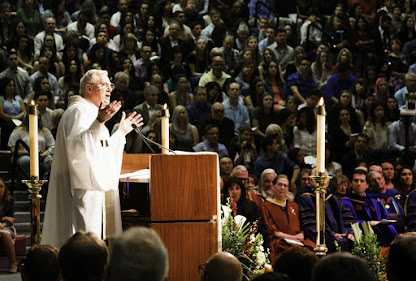 One of the most loathsome tasks as a faculty member is proctoring lunch duty. Anyone who tells you it isn't a big deal is not doing what he/she is supposed to be doing. What might that mean? At SI, lunch duty involved walking around one of three assigned areas to supervise kids. For example, kids cut in line. They shouldn't. They leave all kinds of trash behind. I never understood why this was a problem when garbage cans are available and close by. And, in spite of my best efforts to pray for those who go hungry in class, too often lunch duty found me staring in horror as uneaten plates of food or nearly perfect sandwiches in the garbage. I am pretty sure an unsuspecting Sophomore heard me rant on why that was not and never will be okay. Sorry and not sorry.

At Saint Ignatius, this duty meant that you didn't have your lunch period for about three weeks. The deans would issue certificates of completion once your term was up. Many of us hung these with pride. I did.

The big problem with lunch duty however, is that it is one the best ways to get to know the kids. In an unstructured setting like lunch, you see who among your students are friends. You see how they interact with one another, care for one another, look our for one another and even exclude one another. And as much as I would have traded it for other responsibilities, I knew lunch duty was important. I must say, I also had great verbal spars and story sharing with kids during lunch. I can still recall many of those conversations.

Although the principal was assigned to a given shift, the president was not. However, this did not matter to Robert. He made a point every day at lunch to walk around campus and talk to students. I know this because I would watch him do it. 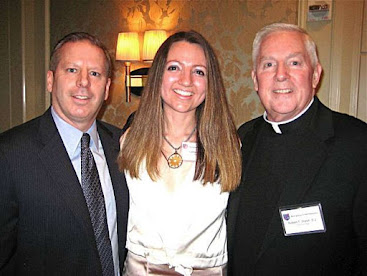 I was always curious to know how Robert knew so many kids. Turns out he assisted a local pastor in presiding at Mass. An SI grad himself, Robert knew a number of students' parents and grandparents; I cannot underscore how significant this is in the formation of a young person! He would ask them about these family members or let them know when he last connected with them. He would talk to athletes dressed up for their games about their upcoming opponents. He smiled, he laughed and he talked to the teachers on duty, as well. Students were always respectful and appreciative of his presence and his kindness.

A true blessing in education is when relationships that develop in this way extend far beyond graduation. For example, I know this is how he developed a life long friendship with Steve Dunne and Brad Walsh, two former students from Loyola High School. Robert was "the boss" at Loyola from 1992-2005 (as both principal and later as president). When St. Ignatius was looking for a head boys' volleyball coach, he reached out to them. In fact, one of my favorite athletic memories at SI is when Dunne and Walsh led this team capture the WCAL Championship title.

Coming from a competitive volleyball background in Southern California, they strengthened the Wildcats' program.They harnessed the physicality of some great athletes and added mental focus and strong coaching.  The title game was supposed to be held in San Jose at the home of the league powerhouse. However, because of AP testing, Bellarmine decided to keep their tables up in the gym. SI opted to host, capturing a home court advantage the Bells didn't think they would need. SI won in five games. It was a huge upset. The gym was electric. Robert was there, delighting in moment. I hope someone credited him for the assist: former students leading current students to excel. 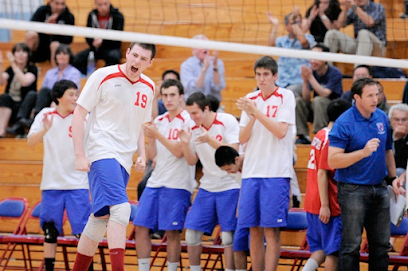 In 2010, Robert showed up to visit me in the hospital, I was grateful to see him and I can't say I was totally surprised either. He came to check in on me and pray with me. I'm pretty sure he told me I didn't look good which was both true and funny (to those who know him!). When I was moved from St. Mary's to CPMC a few days later, he returned. He brought me a card, signed with his signature excellent penmanship and got to meet my mom. He offered her spiritual support by spending time with us. Knowing I would be having a big surgery, he extended the Sacrament of the Sick to me. You just don't forget the people who show up in times like that. Years later, we would always talk about my week in the hospital and celebrate the success of medical technology. I am forever grateful for his ministry—of presence and of faith.

A ministry of presence. This how I hope people remember Father Robert Walsh, SJ. Like many leaders, he had strengths and deficiencies. He worked at SI during tough times, but I am ever grateful for the example he gave to me that one of the greatest gifts we can give to one another is our time, our willingness to connect, our care and concern for one another and our families—in faith and in friendship. That's a pretty good boss....

Eternal rest grant unto them, O Lord, and let perpetual light shine upon them. May the souls of all the faithful departed, through the mercy of God, rest in peace.