As written in my last post, I have learned to embrace a philosophy of low to no expectations. I don't take naturally to this way of seeing the world, but like a lot of things in life, it's important to remember that we don't have to get there alone. Let my book review of "Seven Days in Augusta: Behind the Scenes at the Masters" serve as my example. 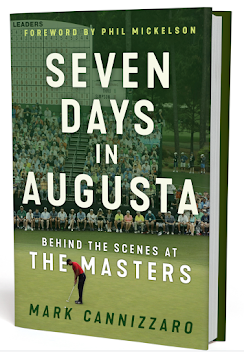 I doubt that Mark Cannizzaro, a columnist for the New York Post and the author of this book would appreciate that introduction for his latest work. However, that is exactly how the text came to me.

My friend Lesley —one of my favorite golfing buddies—and I speak a lot of sports. She is tuned into the San Francisco Giants, our local sports station: KNBR, Golden State Warriors and of course the PGA/LPGA. When I saw her copy of "Seven Days in Augusta," I was excited to hear her impression. I picked it up and enthusiastically asked,  How was it? Lots of great stories? KNBR radio host Brian Murphy had lavished such praise, I felt for but a moment as though I were holding the golden ticket.

She told me, "for all the air time and hype it got, this book is not at all what I thought it would be.  It jumps all over the place. There are so many necessary edits, I wanted to grab a red pen and make changes. Even Phil's intro was lackluster." I thought to myself "that's too bad." I shrugged my shoulders and put it in my bag anyway. Expectations GONE. 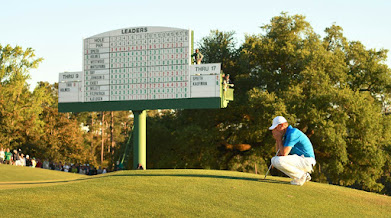 I cannot tell you just how much I enjoyed this read. For one, the subject is among my favorites. I went to The Masters on Saturday and Sunday in 2016. Though the outcome wasn't what many golf fans had hoped for (the defending champion Spieth led by five shots when he made the turn, made a quadruple-bogey 7 at the 12th. He tied for second place, 3 shots behind the winner), I did see two holes-in-one that day. Just to experience what I have long watched on television was super special. To combine my memories and impressions with Cannizzarro's  anecdotes, traditions, history and stories was delightful.

The foreward— written by Phil Mickelson— includes stories that only a beloved athlete like him has to share. For example, he recalls legendary foursomes with past champions and athletic celebrities. In a practice round before the tournament, he played with future Hall of Fame quarterback Tom Brady. Mickelson writes, "Tom said "Hey, listen. I've got to throw to [Patriot's receiver Julian] Edelman. I always throw a little bit to keep my arm sharp. Do you mind catching a few passes?" I can't believe Mickelson said "yes." I mean, I can—but is his hand insured?

It was fascinating to read what each of his three championships meant to him. Not many golfers can give that take. Lefty said,

When I won the Masters for the first time in 2004, it was one of those moments that you kind of realize a dream. When you put stuff out there in the universe and you say, "This is what's going to happen, I'm going to do this," and then you actually do it...that's a cool moment. And that's what was happening for me when I won there for the first time."

Whether or not Mickelson read "The Secret," I think there is something to be said for setting goals, creating a can-do mindset and then taking in the moment as it happens. Reading from this champion inspired me to consider how I do that in my life and remembering to tell my athletes to do the same. 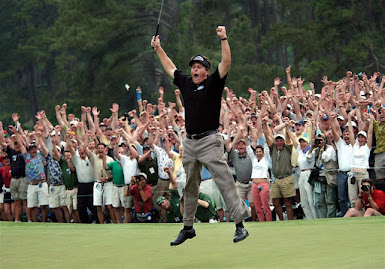 "Seven Days in Augusta" is organized by days of the week, reflecting on a unique attribute of the tourney that corresponds to it. For example, Part One: Monday includes chapters entitled First Impressions, The Locals and The Paper.

I loved reading about the local rag, The Augusta Chronicle "which might as well be named the Masters Chronicle, because there isn't a publication on the planet that has done a better, more thorough and creative job on chronicling the history of the Masters than the local paper."

Unfortunately, I did not pick up my own copy when I traveled to the second largest city in Georgia. However, reading about their paper sparked memories of "The Observer" —the student newspaper at Notre Dame. The Observer's back page featured sports stories. Without exception football was covered in extensive detail...but so was Bookstore Basketball, the world's largest five-on-five tourney. Features were so detailed and lengthy, we wondered if we read more about Bookstore heroes and heroines than the actual men's and women's hoops teams.... 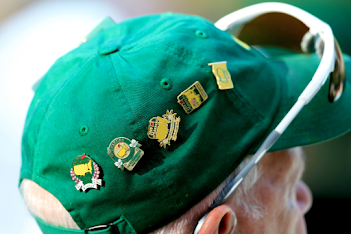 Given financial decline of the newspaper business and the digital revolution, The Augusta Chronicle will likely become a part of Masters history. It should be no surprise that Cannizzaro included its import and I'm glad he did.

Part Two: Tuesday features The Dinner, The Town and The Tree. I can't wait to write a future blog post on the traditions and the menus that take place at the Dinner—a truly exclusive event, open only to past champions!

The Table of Contents speaks for itself. Beyond the Par-3 contest, the honorary starter, moving day, historic defeats and climatic victories, "Seven Days in Augusta" brings the people, place and events of The Masters to life.

I am pretty sure I have passed on a vignette from "Seven Days in Augusta" in nearly round of golf I have played since I read it. Spend enough time with me and you will learn that I want to eat at T-Bonz—a steakhouse that hosts the final dinner for caddies. Or, how lucky I feel  that I was able to attend the crown jewel of golf when I did. New security around tickets, makes that even more tough. 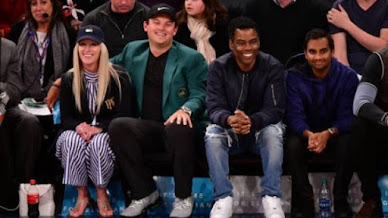 I can see how this tournament is like Christmas week for those who live and work in Augusta. I passed by Hooters on Washington Road and even though John Daly might not be long for this world, I'm still not sure I want to stop by and have him sign any part of my anatomy. I have always been obsessed with the green jacket—Pantone 342. I knew that Sergio wore his jacket at this wedding but my favorite story involved the much maligned Patrick Reed who wore his to a Knicks game. Sitting court-side for the first time with his wife Justine, their seats were next to Chris Rock an 2-Chains. What happened is worth reading. The bottom line is that sports really do offer the gift of connection

Would I have enjoyed "Seven Days in Augusta" as much as I did if my expectations were different? Maybe....but maybe not.

What I have always found interesting is that we find books, but quite often—books find us. This was one of those and I'm grateful to Lesley and to reading it with no expectations.