The Best Kind in Insurance

This past week when asked, "what's new?" rather than comment on the fate of Irish men's and women's basketball or midterm examinations, I was able to throw something new into the mix. I got insurance.

Talk of insurance should put most people to sleep. Really—who wants to discuss one of the five types I already hold: renter's, health, dental, life and car insurance. Heck, you probably have more than those. And, who doesn't find it difficult to talk about what feels like a financial drain?! Afterall, we take out insurance should something bad happen, but the insurance I now pay for quarterly is probably the only type of insurance that will pay out should something go right. I now have hole-in-one insurance.

As many golfers know, there is a local custom at most private clubs that the lucky person who tees their ball up only to have it land in the cup must buy drinks for all who sit at the 19th hole. Depending on your club, its bar, and your friends, this endeavor can cost a person hundreds of dollars. I say it's a price I would gladly pay, BUT truth be told—now I don't have to do so! With my insurance, should I make this shot with odds that are 12,500 to 1 I have a $500 payout good at my club and $250 at any other! Perhaps I should see if visualization really does work?!
Part of me wonders if I can work toward actually making the hole-in-one happen. Is it a goal that a golfer can hold? I say that because I just don't know if it's not some ratio of skill to luck, Or, hard work and determination to the fate of the golf gods? Yes, golf is a sport, but it's also a game affected by good and bad lies, bumps and runs, trees, bunkers, earth, wind and fire (ok, not that). Golf isn't without its physical demands, but the mental game weighs in so tight because of said factors and more. I have thought about the hole-in-one as its own sports goal/achievement since I read “Learn to Dunk.” by Michael McKnight.

McKnight, an author and talented writer for Sports Illustrated captured my imagination when he undertook the quest to slam dunk...at the age of 42...standing all of 6'1" tall. As written in the article "The Dunk Quest: Why Old White Dudes Want, So Badly, to Jam,"

He’d spend long hours in the gym doing squats and lunges, deadlifts and box jumps, cleans and sprints; he’d bloody his hands on rusted rims; he’d put on a weighted vest and leap several thousand times across the playgrounds of his Los Angeles neighborhood. In all, he’d put a year into his training, 15 to 20 hours every week — a grueling, part-time dream for a father of three. “It can be done,” his piece concludes in triumph. “You can enjoy what if feels like to dunk.”

In addition to the enjoyment, I totally get why someone would want to dunk. It's a great talking point. It's distinctive and in a game, a slam dunk makes a statement. Those who can dunk are recognized as good athletes and...they have an inkling of what it must feel like to fly. While but a few of these attributes resonate with the hole-in-one, what I found compelling is that he set out for something that I consider non-sensical. How's that? So many of our goals are quite serious. They are undertaken with a desire to improve, be better, get richer, grow smarter, become holier. How many of our goals are just—well—fun? Sure, McKnight had to become fitter in order to dunk, but his job, his livelihood, marriage, and family were in no way contingent on his success. I recommend you to read his piece to discover what he learned and gained in the process! 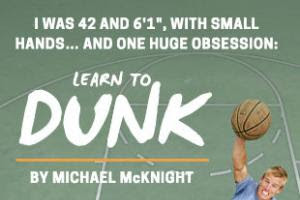 So, I should be committing to a program of excellence toward the hole-in-one. I would like to tell you that I will play the par-3 course at the Olympic Club, the Cliffs course two times a week. I should make it a habit to pay extra attention to the direction of the wind, the slope of the green and the exact yardage to the hole on every par-3 hole I undertake (I say that because a STRONGLY doubt I will hit a one-shot on a par-4 hole. This has been done...but I think the odds just doubled for that to occur with my game). Heck, maybe I should just take 12,500 shots banking on the fact that then the odds really will be in my favor. Mike, if you'd like to join me in this quest, I'm game. In the meantime, I'll talk about the insurance, work toward this goal as I can, take dead aim, hope for a little luck and make a point to always play with another person—another rule for the hole-in-one: it must be witnessed by another golfer.

All of this being said, my approach toward a hole-in-one isn't' a bad rule for life: work hard, play hard, pay attention, keep your focus, hope for the best, let the wind blow as it will and take someone with you. Oh, and while you're at it, take some insurance. Let's hope I need it!

Photo Credits
Hole in One

Posted by Anne Stricherz at 9:24 PM