My Prayer at the National Walkout: Three Coaches at Stoneman Douglas High School

Although a sad day, today was an important day for over 700 students, many teachers, coaches, counselors and administrators of St. Ignatius College Prep who took part in the National School Walkout. 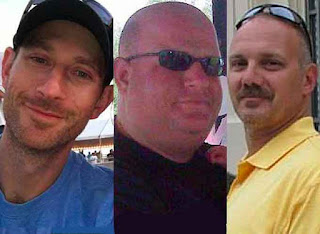 
The student-led event included participation from San Francisco Mayor Mark Farrell '92, who came at the end to collect petitions signed by students, faculty and staff, which he will deliver to Sen. Dianne Feinstein, asking for stricter gun-control laws. Sen. Feinstein's representative was also at our event -- Maggie Mattson (State Executive Assistant and a 2009 SI grad). Also on hand were London Breed, President of SF's Board of Supervisors and a mayoral candidate, and Supervisor Katy Tang, who represents our district.

The event, orchestrated by a student leadership team was publicized and promoted, prayerfully planned and pulled off with a wide range of emotions—fear, despair, loss, sorrow, hope, and determination. A belief that there can be a better tomorrow. A cry that we can and will fight for our lives and put an end to gun violence. 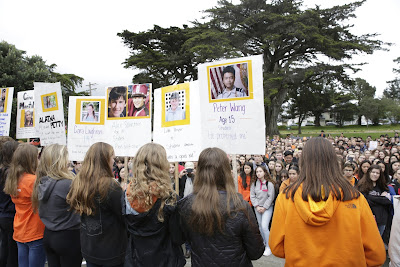 I talked to my own classes about the event, encouraging them to participate with but one request. "If you walk out, and I hope you do— go with a prayer and an intention."

I did what I asked. I carried a thousand prayers with me—for an increased respect for life, for an end to gun violence, for a better understanding of mental health, for stronger communities to support those who struggle. I prayed for the students who died—in particular their parents, siblings, and friends. I prayed for Stoneman Douglas High School—for their loss, their fear, for today and their tomorrow. I must have had 100 others, but my primary intention, my prayer was for Aaron Feis,  Scott Beigel and Chris Hixon.

Aaron Feis, an alum of Stoneman Douglas returned four years after graduation to coach football. The head JV football coach for eight years and an assistant varsity coach, he was also a school security guard. According to the school's Twitter account, Feis shielded students from the shooter, when he was shot and fatally wounded. 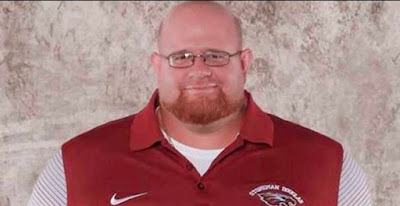 Feis was known for his selflessness. As written on ESPN

I value his coaching philosophy. To me it's one more sign that he cared...he cared deeply. One of his own players said it best:


He did a great job with the [offensive] line. He took pride with working with those guys. Loyalty — I trusted him. He had my back. He worked hard. Just a good man. Loved his family. Loved his brother — just an excellent family man.

Scott Beigel a 35-year-old Geography teacher and cross country coach at Stoneman Douglas died holding a door open so students could escape. He actually told his own mother if he were ever involved in a school shooting, he didn't want to be the one in the spotlight. As written by Amir Vera,


Whenever they talked about shootings, her son would get "intensely angry" at the media for focusing on the victims rather than doing something to prevent gun deaths, Linda Beigel Schulman told CNN on Tuesday. 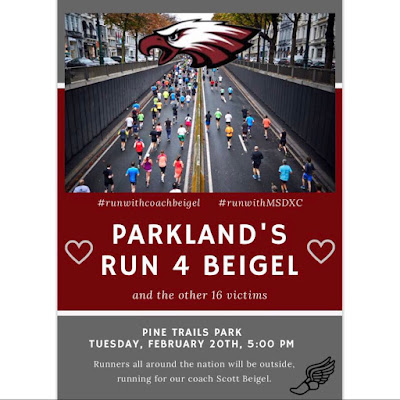 In honor of their coach, "Over 800 students, staff and members of the community gathered at Pine Trails Park on Tuesday evening for "Parkland's Run 4 Beigel," a cross-country run to remember the beloved teacher and coach."


The participants ran around a field about two miles from the high school. At one point, the crowd erupted in applause for the 12 to 15 sheriff's deputies, some of whom ran in their uniforms.

Kelsey Friend, a freshman who survived the tragedy, said that Beigel "will forever be my hero."

"I will never forget the actions that he took for me and for fellow students in the classroom," she said.

Schulman said that her son's actions last week did not surprise her."Those were ... his life rules. You take care of the people around you," she said.

People who think cross country is an individual sport are sorely mistaken. Ask anyone who has made it through the season. Ask coaches like Beigel, who ran with his runners regularly and pushed them to do what they might have doubted. He lived what the sport asks of participants regularly—to do what is challenging and difficult, too often without publicity, highlights or scoreboards. But as I've come to see, even in cross-country, eventually true champions can't help but end up in the spotlight. We are all sorry the spotlight found you in this way, Coach.

Chris Hixon was shot dead by "accused gunman Nikolas Cruz while he sped directly at the shooter in a golf cart. The athletic director was apparently attempting to direct students to safety and also trying to disarm Cruz himself (USA Today)." A Navy veteran, Hixon was a 49-year-old father of two sons and two adopted daughters, a loving husband to Debra, herself a school administrator. 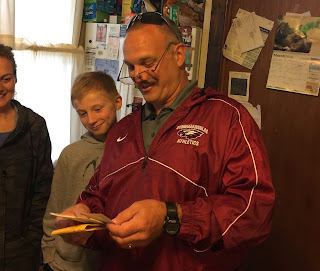 Beloved by many as a high school wrestling coach, his actions reflect what an AD does. One of the most thankless jobs in the school, a good AD hires (and fires) coaches and works so that young people can participate in organized sports. In his final moments, Hixon was organizing young people so they might live.


As I stood listening to the students and special guests, I realized I was standing next to my friend, another coach. I thought of the impact she has on her athletes and how hard she works in the classroom and on the field. I felt a profound weight on my heart and a few tears in my eyes. I looked at the students in front of me as a sign of hope and I said yet another prayer for those coaches who died: Aaron, Scott, and Chris. And I prayed for their families, and the thousands of athletes they have known.
Today, one political speaker said "enough of thoughts and prayers. Today is a day to take action." Although I understand what she meant, I disagree. The greatest social movements have been rooted in prayer; we should not divorce prayer from action. We cannot do it. Thoughts are one thing. Prayer is its own force. Let us not underestimate the power of prayer.
Too often we say "I'll pray for you." But how often do we actually do it? So my plea, my cry is that we continue to pray...pray often...pray loudly....pray openly....pray through the despair and pray....and yes, take action.
Photo Credits
3 Coaches
Aaron Feis
Chris Hixon
SI Students thank you Paul Totah