I like to think that I am a fairly organized person, but truth be told I lose a lot of things—my cell phone, my other earring, my keys...my mind. Recently, I lost my drive in golf. When it's on, it's by far the strongest part of my game. But it's been missing and I need it back. So I decided I'm going to do what I always do when I lose something—say a prayer to St. Anthony.
Yesterday, June 13, we celebrated the Feast Day of St. Anthony of Padua. You might be familiar with this holy man because he is the patron of lost things. However, he's so much more than a clerk of the Lost and Found. So, with this blog I would like to offer a little bit of biographical information about this Franciscan priest and a new way to honor him as he helps us find our way.

St. Anthony, a native of Lisbon, Portugal, was ordained as an Augustinian, but was so inspired by the martyrdom of a group of Franciscan friars killed while preaching in Morocco, that he asked permission to join the Franciscans thinking that he, too, was called to be a martyr.

God had other plans for Anthony. As he sailed for North Africa in order to preach the Gospel, his voyage ended when the ship in which he travelled was hit by a storm. He was shipwrecked on the Italian peninsula. Friars there cared for the wannabe martyr until they took him with them to a Pentecost assembly of all the friars in Assisi.  Anthony was assigned to a retiro, or retreat house where he worked and prayed with his new brothers.

When the brothers discovered that Anthony was a skilled preacher and theologian, his ministry took a new turn. He was charged with teaching theology to the brothers in training and eventually he became an itinerant preacher working out of Padua. He gained a reputation as a staunch opponent of the Albigensians, a thirteenth century heretical group that denied the validity of the sacraments.

In a short time Anthony became known for his concern to the poor and his powerful preaching. Today Anthony is one of the most popular Catholic saints. Frequently people ask his help when they lose things. I do that myself. But even if I don’t find what was lost, it is my experience that just praying and asking the saint’s help has a positive effect. If you’d like to read further about St. Anthony I would suggest St. Anthony of Padua by Fr. Jack Wintz, OFM.

There is much more to learn about this great saint. For example, St. Anthony is often featured in his Franciscan robe, holding the Christ child. It's an endearing image. It's also one that wasn't popularized until the 17th Century. You can read more here. 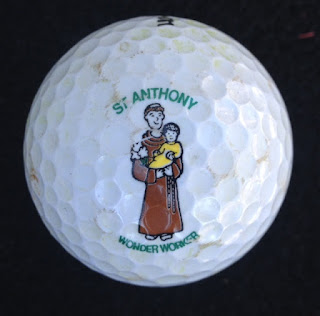 In the city of St. Francis, it is worth noting that one of the most beloved houses of hospitality for the poor and vulnerable is St. Anthony's. It opened its doors on the Feast of St. Francis—October 4, 1950 by Franciscan friar, Father Alfred Boeddeker, OFM.

Today, whenever one of my colleagues loses something, she puts a ransom on the lost item. Depending on its value, she promises to give a certain amount of money to St. Anthony's Foundation should it be found. From time to time, she will up the ante when and if St. Anthony is preoccupied or slow to the job.

I like her approach. Thinking that a saint can find our lost goods isn't exactly why we ought to pray to them. But it certainly humanizes them and in this case, it allows them and us to do good works in the Tenderloin of San Francisco or wherever you think the great St. Anthony would be in your community.

I love the golf ball I had that featured St. Anthony. Unfortunately it now resides in some rough on a golf course in the San Francisco Bay Area. But I think it's time I pony up and give the St Anthony Foundation a new donation. If I find my drive again, I will only give thanks and praise. Amen.