People love NPR, National Public Radio, for many different reasons. Programs like "All Things Considered" and "StoryCorps" never fail to amaze, inspire and infuriate me. Their news hour informs me of national and international news with critical aplomb. One of my students once quipped, "I always feel smarter after listening to NPR." Everyone understood exactly what he meant. So on Saturday when I heard the Weekend Edition report "Two Wildcard Teams Meet in the World Series" "Two Wildcard Teams Meet in the World Series" I was anxious to hear how they would describe my team, the San Francisco Giants. 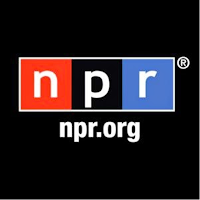 The G-men have played October baseball three times in the last five years. Outstanding. Unbelievable. Rockin' good. With the exception of the Giants All-Star catcher Buster Posey, the amount of national media attention this team gets is anemic. What would a non-sports talk station reveal?

This NPR news story focused on the obvious—the Giants (and Royals) won less that 90 games this season. It also mentioned the style, genius and salary of Giants manager, Bruce Bochy, who has earned every bit of his $5 million dollar salary. And, as newsworthy as his unconventional style of leadership has been, the part of this story that I enjoyed the most wasn't about someone in orange & black. It is a vignette the Royals' center fielder, Lorenzo Cain. 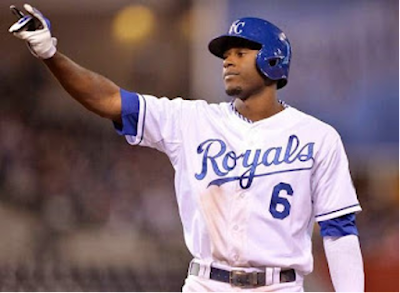 Here's the transcript from the interview:

SIMON: Tom, dropped my pocket comb on the way to work this morning and Lorenzo Cain, the Royals centerfielder, picked it up and threw it to home.
What a series he's having.

GOLDMAN: (Laughter) I'll bet it was a diving catch too, right? He's been a great story. He didn't play baseball until the sophomore year of high school and only after he got cut from the basketball team. That was his first and only sports love. He took to baseball and listen to this story from a great Kansas City Star profile of Cain - talked about his insatiable work ethic in high school combined with this innate skill of tracking down baseballs. He'd ask his high school manager after workouts to help him practice fielding. And here's a quote from the manager, Barney Myers, "when I got tired and I wanted to go home, I would hit the ball as far from Cain as I could so that he had to run. I tried to wear his butt out so I'd get to go home. And that's why I see him making some of the most amazing catches in the playoffs."

I love learning about professional athletes who don't start playing their sport until mid-way through high school. The trend toward specialization in one sport and at increasingly younger ages prevents something from happening. And that something is the most intriguing part of this entire story. "He took to baseball..."

I hadn't heard that word in quite some time. What does it mean to "take" to something?  I asked my students what they thought.** 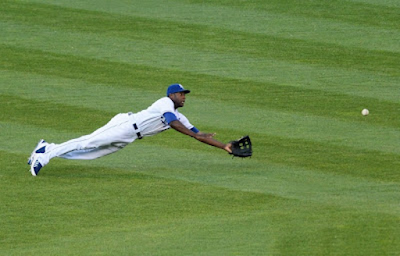 "Taking" to something means to have a natural talent or ability, an inclination toward it. One student added that you can also "take" to a person. For example, he remembers his father telling his favorite babysitter, "my children have really taken to you."
What is wonderful about taking to something is made evident in Cain's story. It draws you in. Your world is expanded. Although he was probably heartbroken about being cut from basketball, he found a new love, a new passion. "Taking" to something makes life a little sweeter.
I think it's important that we offer opportunities for young people to take to something. Every year on our summer immersion trips, I witness how a student "takes" to serving others. Some "take" to the population we serve, others to the freedom and joy they discover in living a life that doesn't revolve around you. My hope it that my students will "take" to the relationship between sports and spirituality, to sacramentality and what makes Catholicism beautiful and true.
What is the last thing you have "taken" to? Is it time you let yourself be "taken" by someone or something?
And as far as the 2014 World Series is concerned, I hope the SF Giants, who have taken my heart, take their third championship title in five year. Sorry Cain.
**One student made a hilarious comment when I asked "What does it mean to "take" to something." He said "hmmm...taking to the streets?" ...Good one
Photo Credits
NPR
Cain
Fielding
Posted by Anne Stricherz at 11:11 PM