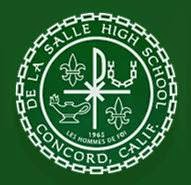 To see the words of a prayer revealed, is a great spiritual gift. I have been a witness to such sacramental moments in likely places—a friend's wedding, the baptism of a child, and even visiting a former student after he had surgery. But I was reminded this past weekend that spiritual gifts are given in unlikely places too. For me, and hopefully many others that was at De La Salle High School's Evening of Honor.

One of my favorite prayers is "A Future Not Our Own" by Oscar Romero. I hope it is not unfamiliar to you. Coaches and teachers need no interpretation or context to understand its message. It captures my belief in these two ministries and why I do what I do with grace and authenticity.

Romero's words have sustained me during the dog-days of the season. When I get tired or frustrated with a runner, I have to "step back and take the long view." I know my role is to tend to "seeds that we hope one day will grow." Indeed, I "cannot do everything," that is why I am one of four members on a coaching staff. I hope and pray that it "enables me to do what I can do very well." Amen!

I pray this prayer because I believe it is true—about God's kingdom and what we are trying to build here and now. But too often, it just doesn't feel that way.

We fight the fight, we plug away and grind it out, knowing we "seldom see the end results." That can be so frustrating. It's easy to lose hope. I have come to the brink many times. I reach my wits end and then I remember I am not the only one who struggles. My fellow "workers in the vineyard" can and do lend a hand. Occasionally, it's their athletes who are my teachers, my beacons of hope. And for me, that was in Demetrius Williams '01—one of five individuals inducted into the 2014 Spartans Hall of Fame.

An outstanding athlete, Williams thanked his football coaches Bob Ladouceur and Terry Eidson as well as Frank Allocco, boys' varsity basketball coach. Williams, a man of few words said "Coach Allocco, I know we didn't always see eye to eye. But you taught me how to play basketball. You instilled in me the importance of the fundamentals of the game. Because of you, I became a team player (NB: a team that won the state championship). I will forever respect you for that and for all you did for me. Thank you." As both a fellow coach and a friend to Frank Allocco, I understood exactly what Williams intimated and of equal importance, what those words meant to Frank.

Coach Allocco has a vision for his team and his players. He knows what it takes and what it's going to cost to win. He is unafraid to tell his athletes their strengths and precisely what they need to work on so the team can get there. Quite often, this is not what a teenager wants to hear. But that is "the difference between the worker and the master builder." The worker wants to complete the job their way, but the master builder has a vision much greater. It might be greater than the worker can even imagine.
For Williams, this vision required using his gifts—his speed, agility and strength. Such gifts take to the hardwood quite naturally. But they must be grounded in the fundamentals of the game, something that's easy to lose sight of in today's world. Indeed, what catches our eye, isn't the feet that are planted and squared up before taking a shot. It isn't the mechanisms of a solid defense that holds opposing players off balance. And it certainly isn't drawing the foul to get to the free throw line. Those things are "beyond our vision," but not Coach Allocco's. Allocco lives by this golden rule and it yields something more than victories, it underscores the path to excellence.

Williams found this type of teacher in Allocco. It might not have been the type of teacher that he wanted when he was brash and bold at seventeen, but it's something he said he will "forever respect." As a teacher and a coach, I can think of nothing more I would rather earn that the real and true respect of someone I helped become not good, but great.

And this reminds me of yet another prayer. In Matthew's Gospel, Jesus says

Coaches and teachers, when the days are long, remember to take the long look. What we want for our students and athletes is part of a greater plan. Stay the course and know that with hard work and a great vision, they too will bear good fruit.

And as written many times, a word of personal thanks to one of the greats, Coach Allocco. You are a cherished teacher to me too.