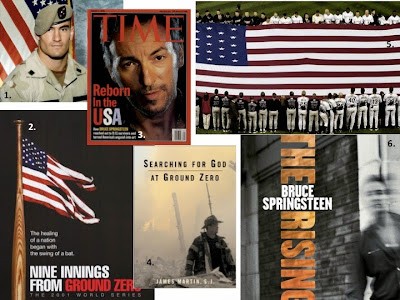 It is hard to believe that thirteen years have passed since that fateful September day in 2001. How will you remember the events of 9/11 tomorrow? Will you go to Mass? Spend extra time in prayer? Reach out to a loved one affected by the tragedy? As a religious studies teacher, I feel as though I have a duty to recognize the magnitude of this infamous day. I also have the privilege of sharing some of the graces that flowed from the talents, desires and the selflessness of many. Here are a few ways I will remember.

1. Tomorrow, I will offer a prayer of gratitude for the countless men and women who respond to the call to serve our country. Although I am more intentional about remembering the former NFL football player turned Army Ranger, Pat Tillman on Memorial Day, his desire to serve was born out of the events of 9/11 and the example of his grandfather.

2. In Sports and Spirituality, my seniors will watch the HBO Documentary "Nine Innings From Ground Zero: The 2001 World Series

." Tom Keogh summarizes why it's worth viewing.


In the days following terrorist attacks on the World Trade Center in 2001, sports might have seemed trivial and irrelevant. But Nine Innings from Ground Zero demonstrates how New Yorkers, in fact, embraced baseball with a cathartic passion, turning Yankees and Mets games into spontaneous rituals of grief and showcases for resilience and the restoration of normalcy. Off the field, both teams found a way to comfort the city to the extent they could, visiting firefighters and relatives of the dead; the Yankees' Derek Jeter personally reached out to the young daughter of one of the pilots killed by hijackers. The Yankees' ride to the World Series that year is covered extensively here, and the team's up-and-down dramas playing against Phoenix coincide with such off-field horrors as an anthrax scare and more warnings of terrorism. Outstanding game footage and interwoven analysis of baseball action and real-world events make Nine Innings unique.

3. Listen to "The Rising." The August 5, 2002 cover story of TIME magazine shares why Springsteen wrote what was his first new album in seven years. Josh Tyrangiel writes, "as he read the New York Times obituaries ("I found those to be very, very meaningful—incredibly powerful," he says), he couldn't help noticing how many times Thunder Road or Born in the USA was played at a memorial service or how many victims had a pile of old Springsteen concert-ticket stubs tucked away in their bedroom. Within days after the towers collapsed, Springsteen was writing songs." America is thankful he did

A wonderful read by one of my favorite authors, James Martin writes "my primary experience of working at the World Trade Center was that of a profound encounter with the presence of God. By saying this, I do not mean to deny that the site is also a piece of unmitigated evil and intense sorrow. It i, of course, a grave. But having worked at the sight meant that I was able to experience not only the sorrow that every American felt but also the hope that came from seeing how God revealed Himself among the people laboring at "Ground Zero." In effect, I was a privileged witness to what many were perhaps not able to see: signs of God's presence in a place of great suffering." I can't read that without getting choked up...and knowing that it's true.


5. "Six days after the terrorist attacks of Sept. 11, 2001, Major League Baseball returned to the field with a new ritual. During the seventh-inning stretch, a moment typically reserved for “Take Me Out to the Ball Game,” another song played at parks around the country: “God Bless America.” Everybody sang along, that night and for weeks afterward." (AP Article).

That tradition continues today. If you go to the yard tomorrow, please join in the singing of this beautiful song for all to hear.

6. Pamela Springsteen, the Boss' younger sister, is the photographer behind the cover art of several of his more recent albums. "The Rising" released on July 7, 2002, is one of them. Again, Tyrangiel writes "The Rising is about Sept. 11, and it is the first significant piece of pop art to respond to the events of that day. Many of the songs are written from the perspective of working people whose lives and fates intersected with those hijacked planes. The songs are sad, but the sadness is almost always matched with optimism, promises of redemption and calls to spiritual arms."

Thirteen years later, this album is more than relevant. It is spiritual, it is gospel, it is art, it is raw and it is remembrance—true remembrance.

In Judaism, the simple act of remembrance is a prayer. No wonder we say "9/11: Never forget." Let us forever hold one another in this prayer.
Photo Credits
Thank you to my student Claire for sharing the photo from outside of AT&T
Posted by Anne Stricherz at 10:12 PM